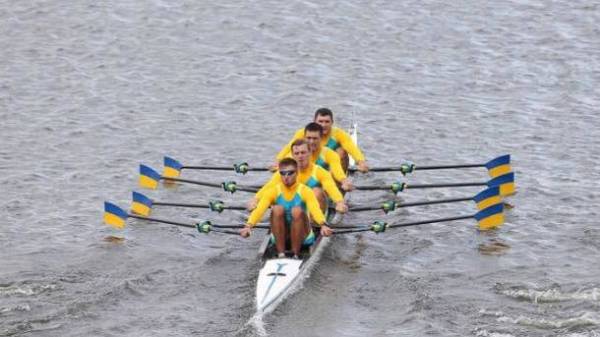 On Saturday morning the athletes-rowers and their coaches had the power to break into the territory of its training facility “Vodnik”, located on Trukhaniv island in Kiev. In the fall of 2016, the database is closed for maintenance, although no work was carried out. In this season of rowing, which I do all athletes on the “Conductor” began, in fact, when the water came down the ice, and in April has to take place first competition. “Today” figured out why professional rowers and fans of the sport were closed doors their usual training base.

Training base, bringing up Champions

Water-sports base “Vodnik” is located on Trukhaniv island in Kiev and has access to the water area MATVEEVSKOE Bay. For almost 60 years through the base were thousands of athletes. Her students have won Olympic medals, became winners and prize-winners of world and European Championships and international regattas. At the base can deal with not only professional athletes, but to all interested in rowing. Now on the basis of training about 60 athletes, veterans and Amateurs of sport.

However, at the moment the base is closed. According to the official version – to repair, but the athletes and coaches suspected that to come back they can not. In addition, in the coming season to train them just anywhere. This ad hangs in the entrance to the base

Why base Vodnik closed – official version

On Saturday, the athletes, their coaches and representatives of the Federation of rowing arrived in Ukraine on Vodnik, planning to go to the base at all costs. Before that, they were here on March 4. Then it turned out that announced in the autumn renovation work has not begun. Moreover, athletes have discovered that they have acquired equipment that all winter stored in the database, completely disassembled. And recently it became known that the pier from which boats were down on the water, is on a shtrafploshchadka. According to the Municipal enterprise “Pleso”, which towed the dock to the platform, he broke away and drifted freely along the Dnieper in the direction of the Metro bridge.

The guards open the gates to the territory is refused, showing the audience a printed document which States that in the summer of 2016, OOO “Kolos” owning the base, he received orders from the fire service on the emergency database state. According to the document, the owners of the base and all-Ukrainian sports society “Kolos” Agricultural sector of Ukraine adopted a decision on preparation of a basis for the overhaul and reconstruction posodeystvuem in search of a new place to train athletes. In addition, the “Vodnik” will ensure that everyone will be able to return to training based on completion of repair. The announcement of the redevelopment

“Today, the society has developed a project for the redevelopment within the existing buildings, which is currently undergoing harmonization in accordance with the requirements of the current legislation of Ukraine. In the near future it is planned to start preparatory work for the overhaul and reconstruction. These works will not allow them to carry out safe training process”, – stated in the presented document.

In addition, the letter notes that the property stored on the database, has been partially inventoried.

As told in comments “Today,” the owner of the base, people’s Deputy of Ukraine of the 4th convocation Oleg Salmin, the announcement is that the official position of the leadership of “Conductor”.

“I work in children’s sports school “Kolos”. In order to get to work, every time I have to ask the officer on duty permission, although I am officially on the payroll, I have a schedule, have children,” – said honored coach of Ukraine Andriy Starch.

On the basis he has more than 50 years and next month he’s scheduled another competition, so go down to the water they need now. However, in connection with the repair database you need to remove all boats and other equipment, he said. The territory of the Vodnik

Currently base training about 60 athletes, but often come and those who had engaged in rowing, and those who love this sport. Because this form of the season starts after the water comes down the ice to start training with the rowers have already, says Vice-President of the rowing Federation of Ukraine Larisa Shari.

Because of the repair manual “Vodnik” offers them this season to use the services of other bases. But, according to Sari, that would be problematic – they are all busy with other rowers. And equipment, and this equipment, boathouse and four boats, they move nowhere.

“Over the past ten years at Bay really made the room sports base, because many of them sport are already long gone. Base clogged. The biggest problem is we have four boathouse with boats. Some expensive, some not, but all of them are very necessary. What to do with these four boathouse, we don’t know,” she says.

Vice-President of the Federation said: for Canoeing to replace the water exercise machines can not. Moreover, soon will begin the qualifiers for various competitions, and the “Conductor” rowers trained for the last time last fall. In this case, they miss a season of training will be equivalent to or withdrawal from sports or beginning from scratch, says Shari.

But more and more athletes are concerned that, as it turned out, during the winter all their equipment stored at the base, was demolished.

“On March 4 we went. We have exercise equipment out there on 150 thousand hryvnias. It is the carrying value. The actual cost is more – modern equipment for rowers. The coaches went room dark, with no light and have a pile of parts, disassembled everything to the screws. Called the police, they through the fence made the statement had nothing to do, it’s not opened – there is no crime. Now we need to pick up, boat pick up,” she says. 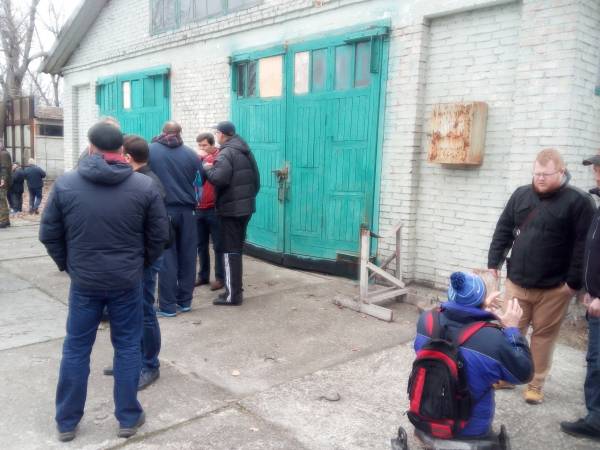 In this room there is a gym

Sarai suggests that now the rowers from the base trying to “evict”, allegedly promising to carry out repairs to those returned in good conditions. However, that athletes will be able to return, the Vice-President of the Federation doubts. In her opinion, it will create the appearance of construction to the until will not sell or will not make a land that, for lack of a master plan for the reconstruction on the island, not decorated.

The user base is not engaged – the Federation of rowing

Thus, according to the Vice-President of the Federation, the current owners of the base are not engaged. According to her, all on this site do athletes themselves.

“The base is private, but there is a part of sports society “Kolos”, which should think about these athletes. And they completely walked away,” she says.

It tells Sarai, the base was built with funds of the Kyiv regional organization of sports society “Kolos”. However, about 10 years ago its Chairman and commercial enterprise “Right coast” established LLC “Kolos-Sport”, dividing the authorized capital 76% to 24%. 24% remained in a “Spike”. The private firm thus had to make about eight million hryvnia, says Vice-President of the Federation. A fragment of the Statute of LLC “Kolos-Sport”

“It’s been 10 years, no eight million no one saw. Now they are claiming that they are the owners and pay for the land and property, so they will dictate their conditions, she says. – Appeal to the fact that they have taxes. But if the base remained in the ownership of the sports society, taxes would not be – the law exempts such facilities from paying taxes. But they are almost 53 thousand hryvnia per month was already in the past year. Now even more”.

Building located on school property, were contributed to the authorized Fund “ear-Sport”. The inventory, which is on the “Conductor” none of these organizations has nothing to do – part of the property belongs to the School of the highest sports skill, and some – personally, athletes and coaches, she said.

Co-owner of “Vodnik” suspect athletes in the selfish interests

The leadership of “Conductor”, in turn, argues: we are talking about the closure of the base is not. Comments in the “Today” Oleg Salmin said that after the reconstruction here will be able to train both athletes and the General public. In addition, he said, “Kolos-Sport” is ready to offer athletes a guarantee that after the repair they come back and even help to find a place for temporary training.

“There are bases on the same Trukhaniv island, which is ready to accept them and give them the opportunity to train. Just have a number of athletes, so they call, in quotes, who blackmailed, who want to “go” in the base as property owners, free of charge, said Salmin, – Raiding on the part of certain people”.

In addition, according to him, a number of players to temporarily “move” to another base agreed. As for the immediate future “Vodnik”, he noted that this winter the owners have prepared the project of reconstruction of the base, which is now undergoing approval in the official bodies.

“The official position – work documents for the reconstruction of the basis for the next season, the athletes could come and train under normal conditions”, – he said.

Salmin hopes that in April, the reconstruction will start, but to be at this time on the basis of none of the athletes or coaches will not be able, for security reasons. Moreover, the export will have all the equipment, including simulators. With this purpose, according to Salmina, they were dismantled.

“Simulators are introduced informally. Them documents on the basis of no. We don’t know whose exercise machines. We spoke to athletes that they have provided the documents, did inventory, they refuse – part made, part of the refuse it in order to create conflict. Trainers figured out because this room is also planned to repair, and to make him the equipment he needed to move to another place. None of these simulators is not going to throw away or something to do with them. We can collect them, just where they will stand? We must first find out whose simulators,” said he.

Practice still can not

On the weekend to go to the base athletes will have the opportunity, ripping off the padlock with a crowbar. 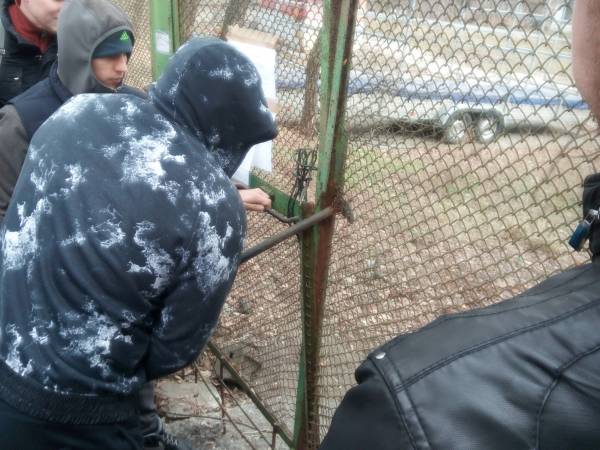 Athletes were able to get to the base power

However, confidence that tomorrow they will be able to start training, they do not. First you need to pick up from the impound lot detached pier and to secure it in place. In addition, the issue of access to Vodnik was never solved. Next week, the management framework proposes to hold a meeting, which, according to them, will help to resolve the situation. 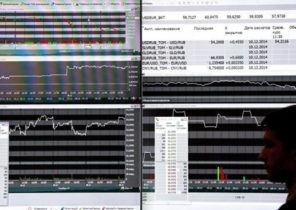