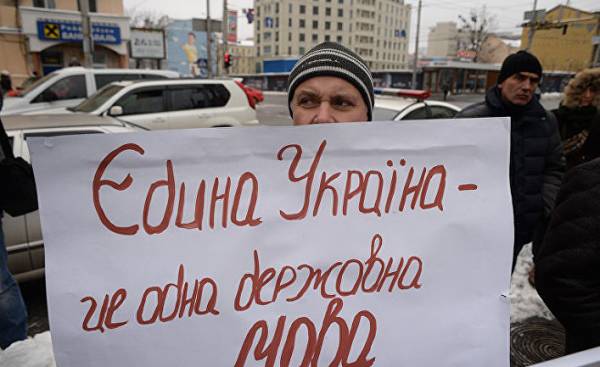 The constitutional status of Ukrainian as the state language — is neglected. It is firmly fixed in the public authorities and services. In an interview with Gazeta.ua told the head of the faction all-Ukrainian Union “Freedom” (the organization was prohibited on the territory of Crimea — approx. ed.) in the city Council Yury Sirotyuk. He initiated the project of resolution “On overcoming the consequences of the Soviet occupation in the field of language”.

“The newspaper in Ukrainian“: Why this document could not be adopted before?

Yuriy syrotiuk: did Not accept before, because Kiev is a post-colonial, paleobotany the city. Here are strong enough the consequences of the Soviet occupation. And despite the constitutional status of the Ukrainian language, it is not fixed in the service sector. Shops and cafés are very difficult to make Ukrainian. The whole year was not the solution to navigate through the city Council. This time spent in the so-called “acquiescence”. None of the city Council Commission this decision not agreed. Helped that several hundred prominent activists, linguists, musicians gathered under the city Council and demanded to take this decision. Under public pressure managed to do it. The government is not interested to Ukrainians on an equal level with others. 25 years in the independent state, the Ukrainians were discriminated against ethnic, social and linguistic aspects.

— Finally, the city Council can adopt the document in its current form or can make changes that contradict the main idea?

Possible purely technical corrections which do not contradict the ideology of this decision. I’m ready for any consolidated and compromise amendments. Want to Kiev were proud of the city Council, and it is my decision. Believe that we have neither the Communists nor the regionals that will offer something incorrectly.

— In the document there is a requirement to establish in the capital of the Ukrainian language “work” for local governments and utility companies. Obliged to speak it staff shops, cafes, restaurants and transport. There will be a mass resistance to implementation of these standards?

— It’s rewritten the rule of the Constitution. In proceedings and officials and so be obliged to speak Ukrainian. In cafes and shops the situation is different. Is there resistance possible. Most of the staff — in English. But with this decision the people of Kiev will be easier to protect their linguistic right. Russian language is no less a threat than “Grad”, guns, shells. To some extent, the decision will help to keep. Of course, there will be a bunch of custom articles, outrage. But this is our land, Kyiv is a European city, and Ukrainian. Therefore, should provide a sound status of the Ukrainian language.

— Who will resist the most?

— Banks, when asked what language to speak, the first should be Ukrainian. But if someone wants the other, please. Staff in services should know the state language. If a restaurant or cafe willfully do not comply with the decision, the city Council has the right when viewing licenses or contracts not to continue the cooperation with such.

— Now most of the signs and Burgundy — in the Russian language. How long will it take the transition in Ukrainian?

— During the month can all be replaced.

— What are the main obstacles are in the way of realization of the document?

— The main obstacles is the fact that Ukraine has for several centuries been colonized, and the Ukrainian nation remains colonial. The occupier allows himself to have to speak their language and neglected state. The working language of the government, the presidential Administration is also Russian, and the government is not happy with this decision. It is convenient for them, when the Ukrainians solve nothing and have no rights. We will continue to overcome. The decision is not intended to punish someone or to discriminate against, not for languages of national minorities. It is the protection of the ethnic — language of the majority of Ukrainians.

— Ukrainian-Kiev can somehow influence the implementation of the instrument?

A key mechanism for the implementation of the decision of a society. It can punish violators of the law. For example, people can not go to places where not served in Ukrainian, to complain to the society for the protection of the rights of consumers. Ukrainians should be more active than the state apparatus. It will not be easy, but must ensure that they have all the European countries. Lives in Kiev more than 80 percent ethnic Ukrainians, of which 60 percent is Ukrainian.

April 20, members of the city Council adopted the draft decision on introduction of the Ukrainian language in the sphere of services “On overcoming the consequences of Soviet occupation in the field of language”. In support of April 20 at the city Council gathered supporters IN “Freedom”, “Right sector”, “the Movement Zahist ukraïnskoï movi” and other organizations.