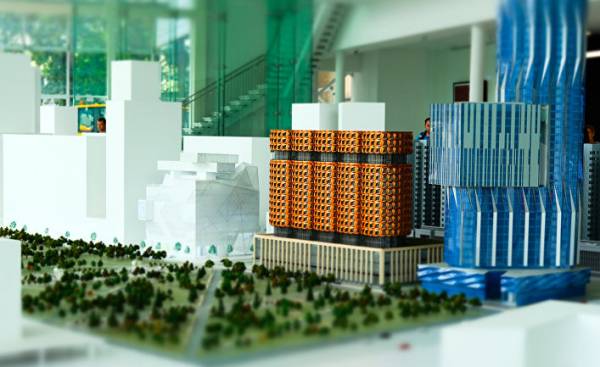 When you come to Moscow from the international airport “Sheremetyevo”, the view of the factory “Bolshevik”, built in the XIX century red brick serves to weary travelers a reassuring sign, indicating that when all the terrible traffic jams on the roads they almost reached the centre of the city.

Factory, founded in 1855 by the French businessman Adolf Sioux (Sioux Adolf), was famous throughout Russia as a manufacturer of biscuits and confectionery, as well as former supplier of sweets to the Imperial court. Lenin nationalized and renamed in honor of his revolutionary party, the Bolsheviks, the factory continued to flourish and in Soviet times, but now she was among the many urban industrial zones, which are converted into offices and luxury homes.

Given that a growing population creates a burden for the residential sector, and the authorities restrict the construction of tall buildings in the centre, developers are in search of a little built-up areas took around town an unused industrial area.

“Loft” is the new buzzword in the Russian real estate websites who offer for sale a huge apartment in the premises of the former companies as a natural habitat for a new class of advanced young professionals.

A ten minute walk from Belorussky railway station (railway stations in Russia often named after the final destination) and the new business center White Square development company O1 Properties, together with the British architectural Bureau John McAslan & Partners was the reconstruction of the buildings of the factory “Bolshevik” with the aim of turning it into a multifunctional business, residential and cultural center.

Last year it opened offices and an art gallery displaying a private collection of paintings by Russian Impressionists, as well as a café, serving traditional sweets factory “Bolshevik”, which now made the American company Kraft Foods enterprise in the Vladimir region, 180 kilometers East of Moscow.

Housing unit-IFC complex “Bolshevik” is still surrounded by scaffolding, but the reconstruction work should be completed by the end of this year. Luxury apartments and lofts ranging from 30 to 109 square meters overlook the courtyard which is set back from the busy Leningradsky prospect and which is quiet even in peak hours. Sales of real estate in the complex “Bolshevik” is the O1 Properties company, and rates vary from 10.2 million rubles for the smallest apartments to 79 million rubles for the biggest. According to the developer, 15% of the apartments already sold.

Architectural Bureau John McAslan previously worked with the award of the project on creation in Moscow of the business center “Stanislavsky Factory” near the metro station “Taganskaya”. Here the buildings of the former Solidaritatea factory, built in the early XX century, was completely restored, and the territory appeared a multifunctional complex business center and several new low-rise residential buildings, as well as a restored theater. Moscow Agency for the sale of real estate is part of an international network of Savills, sells now a one-bedroom apartment with an area of 140 square meters in the complex “Factory of the Stanislavsky” for 2.18 million dollars.

Club house Depre Loft on the Petrovsky Boulevard also has a rich historical past. It stands on the site of a wine warehouse, built by an officer in Napoleon’s army who remained in Russia after the ill-fated invasion of Napoleon in 1812. Now it’s building found a second life, and there is a complex of loft apartments.

Apartments in Depre Loft ranging from 46 to 180 square meters are nearing completion, and the Russian construction company KR Properties sells them at a price from 391,738 thousand to $ 1.4 million.

Also on the market are beginning to offer apartments in the multifunctional complex Wine House, where the Russian developer Hals-Development has restored the building of the former factory of sparkling wines of the XIX century, once belonged to the supplier of alcohol for the Imperial court Pyotr Smirnov. This is a beautiful red brick building is now at the center of a new residential complex on the island of Balchug, located just South of the Kremlin.

Life in a renovated factory buildings are attractive to young Russians, who are more cosmopolitan and pay for the design more attention than the older generation who lived much of his life in the Soviet Union.

Ten years ago, a typical buyer real estate premium was oilman 40-50 years, who wanted to live in an apartment in a prestigious area, if it was “a lot of spacious rooms and spacious toilets,” says the Director of the Department on work with developers in the Moscow real estate Agency Savills Alexander Sinilova. And the young customers who now enters the market of premium earned their money working in the field of IT-technology, media or as entrepreneurs, and usually are living space more creatively.

“It’s those Russians who have been to new York or Chicago, or just watched a lot of contemporary American movies, she says. They saw the heroes of films like “Sex and the city” and want to live in the same conditions, but adapted to Moscow.”

In the next two decades in Moscow will be reconstructed approximately 7 thousand hectares of unused industrial areas, including the vast territory of plant “ZIL” on the embankment of the Moscow river, which once produced limousines for the Soviet elite.

The reconstruction of industrial zones correspond to the plans of the mayor of Moscow Sergey Sobyanin in charge of the revival program of the city, aimed at creating an attractive environment that will allow the capital to compete with Western cities. This means the creation of new parks, pedestrian areas, cycle paths and cafes.

However, the wave of construction of new residential complexes contributes to the decline on the Moscow real estate market.

According to consulting company Knight Frank, working in the field of commercial and residential real estate activity in the market of real estate in the city declined over the year by more than 11%. This was facilitated by the economic slowdown in Russia, largely due to low oil prices combined with international sanctions imposed after the annexation of Crimea. According to the company Knight Frank global index of real estate PIRI, which determines the efficiency of the market of real estate in 100 cities around the world, Moscow came in 99th place. Things are worse in this area only in Lagos in Nigeria.

“Now is a good time for buyers, but pretty difficult for developers,” — said the Director of town and country real estate in the Russian office of Knight Frank Alexey Treshchev. However, there are signs of recovery of customer confidence. Wealthy Russians have invested to reserve apartments in the residential complex “Mosfilmovsky” in the South of Moscow, where erected of 33 thousand square meters of housing next to the iconic Studio, which was once made films Sergei Eisenstein and Andrei Tarkovsky.

“Moscow is not currently as attractive as a European city, says Aidan Potter (Aidan Potter), head of project of residential complex “Mosfilmovsky” architectural Bureau John McAslan+Partners. But most of my clients believe that this year the situation looks pretty good, and I expect improvement next year.”

The Russian ruble after a sharp drop in 2014-2015 stabilized, but he is still weaker than in pre-crisis years. This means that for those who are willing to spend hard currency buying real estate may still look a bargain.

Although tensions between Russia and the West are holding back European investment in the Moscow real estate market increasingly active buyers from China and Middle East countries.

The Chinese are popular with realtors, because they are engaged in the apartment search groups, often buying “five, six or even eight apartments immediately,” says Sinilova. However, they are not interested in the lofts. The Chinese are usually looking for apartments in the “new homes with panoramic views and attractive European design,” she says.