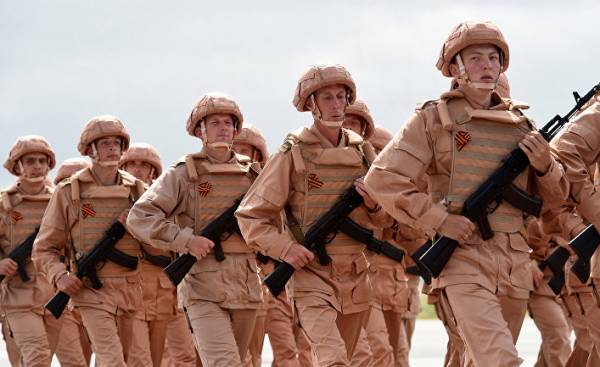 14 APR groups fighting on the side of the regime, began their attacks against opposition forces in the city of Hama, resulting in on Sunday recaptured the town of Suran. Russian fighter jets carried out aerial bombing using Napalm and thermite bombs throughout the Hama and southern Idlib, including Khan Sheyhun, which can be regarded as an attempt to cover up the traces of chemical crimes. On Monday, the Russian fighter made more than 20 raids on Han Sheyhun, there by destroying vital installations.

On communications networks “Syrian reporter” they received information that Russia has sent the regime forces and the Iranian militias in a major ground operation, in order at any cost to take control of Khan Sheyhun in Idlib province. According to reports another information resource, the major forces involved in the fighting in Hama, along with the forces of the regime, are the Afghan “Liwa, Fatemiyon” (Shia organization founded in 2014 to fight the militants of Syrian opposition and allegedly funded, trained and equipped by the Iranian Islamic revolutionary guard Corps — approx. ed.), the Iraqi “Harakat An-Nujaba”, “Revolutionary guard” of Iran, the Palestinian “forces of the Galilee” and of the militia of “National defense”.

April 4 the city of Khan Sheyhun was subjected to aerial attack by government forces using sarin gas. As a result of this chemical attack hundreds of people, including children, died of suffocation. The attack in Khan Sheyhun prompted the United States to implement a missile strike from Mediterranean sea on the air base of the regime, which, in particular, flew a fighter jet dropped a bomb on Khan Sheyhun. 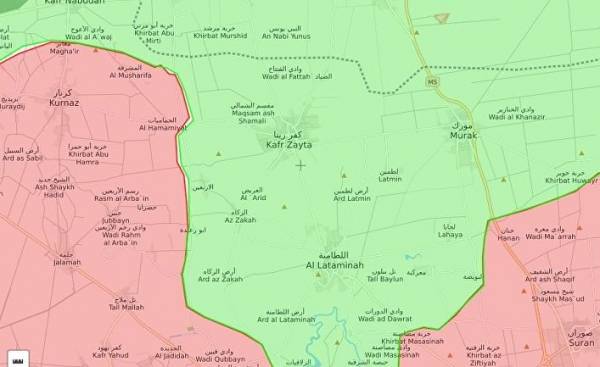 In order to capture Han Sheyhun, military forces by the regime needed to take control of the city of Halfa, Morek, Tibet-El-Imam, Car Naboodah and Hama. The militia regime launched an attack on the perimeter, Tibet-El-Imam and Halfa, in which the opposition gave them back, which resulted in the ranks of the government forces suffered heavy losses.

Regime forces have advanced North of Hama, but their movement ceased to the sudden counterattack of the opposition forces and the “Committee for the liberation of the Levant” defeated government positions in the areas of Sira and Dalek, near the town of Salaam. Controlled by “the Committee for the liberation of the Levant” IPA Agency later announced the elimination of six positions and the deaths of dozens of militants of the regime, moreover, before leaving, “troops of the opposition was made the seizure of equipment, weapons and various ammunition.”

The correspondent Ziad Al Modon al-Hamvi said that as a result of intensive bombing at the present time the strength of the opposition in Hama reduced. “Army of glory” (“Jaish al-Azza”) and “Committee for the liberation of the Levant” fought fierce battles to protect Tibet-El-Imam and Halfa. Al-Hamvi noted that there is no evidence that “Ahrar al-sham”(“Islamic movement of free men of sham” — approx. TRANS.) supported the “Committee for the liberation of the Levant.” However, he confirmed the arrival in Tibet al-Imam reinforcement of the “Turkestan Islamic party”.

Al-Hamvi stressed that the militia of the regime suffered a very large loss, which makes attempts to move towards the Khan Sheyhun very costly in terms of human losses. Moreover, the mode is difficult to continue a heavy bombardment of Idlib, as this province consists mainly of urban areas. Morek and Khan Sheyhun also represent the points of the opposition to facilitate the task of their protection.

On the other hand, regime forces carried out training operations to mask(hide) their base in Dar, set fire to tires and use the materials with dense smoke when burning. The smoke hides the military airport “al-Saal” in the city of Suwayda, “Brigade 12”, battalion “248 Artillery” Brigade”, 15″ Inhale and military unit in the town of Ezra. Ahmed Hourani, correspondent of Al Modon, said that “in all probability, under the guise of maneuvers, using smoke, they want to mislead hostile aircraft, whether military or intelligence. Some activists believe that such operations are conducted with the intent to conceal the transportation or storage of weapons in the region.

On the other hand, the correspondent of Al Modon Harun al-Aswad said it planned to transport the rebels from Zabadani in the Damascus province in Idlib. It is believed that the agreement’s “four cities” (agreement release representatives of the opposition of four Syrian cities of al-Foy, Kefraya in Idlib province and Madai and Zabadani in the suburbs of Damascus — approx. ed.) was suspended after the explosions in Aleppo a few days ago. It is expected that the buses from Zabadani will bring about 200 of the militants.