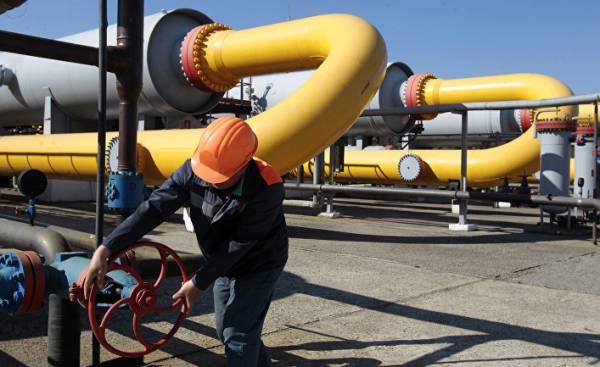 The true purpose of Putin’s project “Nord stream — 2” is to destroy the economy of Ukraine, said Andriy KOBOLEV. He manages the Ukrainian gas company, which now earns billions on gas transit.

Office Soviet building in Kiev, where the Ukrainian state gas company “Naftogaz”, the wind of change.

Three years after the protests on the Maidan Ukraine is trying to pull the economy from perennial political swamp of corruption and dependence on Russia. Cleaning the tops of Naftogaz very symbolic. In the center is the main head of the company, Director and Chairman of the Board Andriy KOBOLEV.

“We’ve come a long way. For the first time, we are fully independent from Russian gas for domestic use. It is an important component of Ukraine’s sovereignty. But there is no less a long way. We still need the EU,” he says.

Just over 38 thousand kilometres of gas pipelines under the ground permeate most of the country, like a giant subway system, which transported billions of cubic meters of natural gas from Russia to the EU.

Since Ukraine last year stopped to buy gas directly from Russian and started on the inside need to get it from other sources — Slovakia, Poland and Hungary, and Naftogaz, and hence the Ukrainian state, earns a lot of money for transit to Europe.

Naftogaz is afraid of losing a large part of the profit in case the Russian gas company “Gazprom” will be able to build a new pipeline to the Danish and Swedish waters of the Baltic sea to the coast of Germany, that is, bypassing Ukraine and Eastern Europe.

The Ukrainian gas network can disappear

“In the Russian project has no commercial sense,” says Andriy KOBOLEV about the so-called “Northern stream — 2”. The construction of the new pipeline will cost about 60 billion DKK. Until all financed by Russia.

“Cheaper and safer to supply gas through Ukraine, and our network of great reserve power. So why Russia wants to spend all this money on the construction of “Nord stream — 2″? In Moscow, after all, are not fools,” he says.

He had experience with Gazprom still that winter of 2005-2006, when Russia cut off gas to Ukraine and much of Europe because of disputes over prices and transit charges the Ukrainians of stealing the transit gas.

“We, Ukrainians, suffered from this malicious mixing energy and geopolitical problems. Russia uses gas as a very powerful political tool. Therefore, Denmark and the rest of Europe should be aware of what exactly the real purpose of Putin”, — said the Director of COBOL.

“How it will look in the gas market in Central and Eastern Europe in the future, if transit no longer will be carried out through Ukraine? If our network is no longer in use, we will be forced to close it. Otherwise contain it will be too unprofitable. After this method the supply of gas to such countries as Poland, Slovakia, Hungary, Bulgaria and others, will have to change. All of this part of Europe will suffer”.

The price that Putin pay for Crimea

Politiken: What are the real goals of Russia?

Andrey Korolev: to Win the war for Ukraine. Not military means, and strangled the country’s economy and impede the reforms that Ukraine in the eyes of the West was not trustworthy.

— And you’re not just saying that just because you own a lot of money at stake?

— Of course, we have interests in this matter. But at the same time, people in the EU have not seen the other side of this situation. We just suggest to look at the whole picture.

— What kind of picture you mean?

— Vladimir Putin now in trap. He took the Crimea, which is to take West. This means that sanctions against Russia will not be lifted until Crimea will not return back to Ukraine. Russia is suffering losses. But for Putin, the return of the Crimea now would be a political disaster, the Russian propaganda has turned the Peninsula into a sort of Holy land for the Russians.

Moscow is seeking the collapse of Ukraine

— What does the transit of gas has to Crimea?

— The best option for Putin would be a situation in which to return the Crimea would be just nobody. If Ukraine will fall, Putin will be able to say, “Well, I’m willing to give the Crimea back, but can’t, because Ukraine as a country no longer exists. In his place I would have done everything to create the preconditions for such a situation.

Note how often he spoke about Ukraine as about the collapsing state. If Ukraine disintegrates, this will be the best solution for Putin.

— Putin can this be achieved?

— It can be done in two ways. The first is the military, but is obvious to everyone that, then sanctions will be even tougher. The second — to strangle Ukraine economically. This can be done including sending the gas to bypass us. Billions of investments of Gazprom in the construction of “Nord stream — 2” — a charge Putin for the solution of the Ukrainian problem and getting rid of the sanctions of the West.

— What are the consequences for gas supplies to the EU?

— Putin could use the collapse of Ukraine is to split Europe. When Poland, Hungary and Slovakia will be left without gas, he can tell the European countries view the EU has betrayed you. And I can help. But if you want me to help, you will have to pay.

What do you recommend to Danish politicians, who will approve the project?

— Ask them to conduct a thorough investigation. Not necessarily just believe me or anyone else. And then ask yourself why Russia is ready to give you the pipeline.