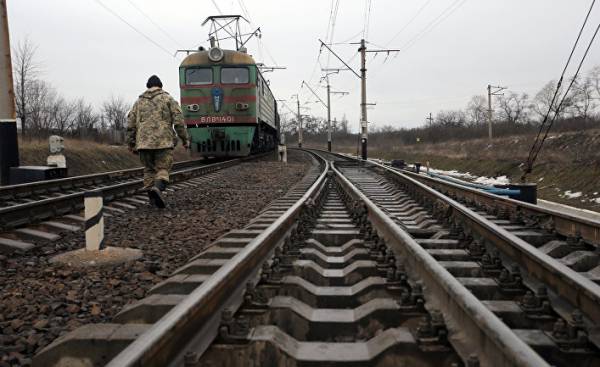 In late January, demobilized soldiers and veterans of the volunteer battalions have blocked some railway lines leading to the occupied part of Donbass. Thus began the blockade of trade between Ukraine and the “people’s republics”. Veterans demand its official termination, saying that you want to stop the flow of contraband going to the Pro-Russian rebels. While Ukrainian soldiers killed in the war, and half of the population lives in poverty, the oligarchs are amassing fortunes on the “bloody trade”, de-facto financing the rebels, they resemble. In the last year alone, the security Service of Ukraine has issued about 100 thousand permits for the movement of different kind of goods in the occupied zone. Approximately half of the proceeds from the sale of coal to the Ukrainian market came to the budget “people’s republics”.

Ukrainian deposits of anthracite (high-energy coal, which is mainly used in Ukrainian power plants), and plants producing coke, are mainly in the occupied part of Donbass. In turn, most of the power plants and steel plants on the other side of the front. Due to the blocking of the supply of coal to Ukraine in Kiev faced with a shortage of energy and metallurgical complexes, which were the mainstay of the economy, had to suspend production. In the occupied territories lose their job the miners as coal was no one to sell. This is a potential “soldiers” in the ranks of the rebels, they at least will pay.

Ukrainian Prime Minister Volodymyr Groysman said that the alternative to the Donbass coal. He explained that the local mine was in Ukraine and Kiev pay taxes, so they cannot deny the markets. The government argues that the transfer of power plants to other fuels in the next 3-5 years will have to pay annually half a billion dollars. In turn, imports of anthracite from Russia would entail too great political cost. So Kiev increases the dependence on nuclear energy: its share in energy production reaches 60%. At the same time he has to reduce energy exports to the EU and to abandon plans for the resumption of exports to Belarus and Moldova. Ukraine operates 14 large thermal power plants, half of them in anthracite.

Nine owned by Rinat Akhmetov, one of the main sponsors of Party of regions and Viktor Yanukovych. He not only did not hurt after the Maidan, but most of all profited from the “blood trade” and the occupation of Donbass. It is not surprising that he now calls not to abandon the supplies from the region and Russia, and is associated with the oligarch officials engaged in discrediting the idea of buying “black gold” in other countries, such as South Africa.

February 15, Ukraine declared a state of emergency in the energy sphere, which will last at least a month. State company “Ukrenergo” reported that if the supply from the occupied part of Donbass is not resumed the supply of coal to the power plants will end in late March. The government warns of impending blackouts in key industrial regions. If nothing changes, the end of the month will have to start rolling blackouts in Kharkov, Dnepropetrovsk, Kiev, Zaporozhye, Sumy, Chernihiv and Cherkasy. President Poroshenko stressed that the blockade destabilizie the economy and the situation in the country. It is estimated that over 300 000 people could lose their jobs, and the country will lose two billion hard currency revenues.

Jeopardized the prospects of economic growth. In the spring of 2016 after years of decline, the industrial production began to increase due to the rise in metallurgy, increase in global prices and the relatively calm situation on the front.

The blocking of several railway lines and roads leading to “people’s Republic” accompanied by the buildup of tension in Kiev. February 19 had been street clashes between the organizers of the blockade (deputies Vladimir Parasyuk and Semyon Semenchenko), who were supported by the nationalists from the OUN (banned in Russia organization — approx. ed.) and other radical organizations, with the police. Thanks to the intervention of the National guard to camp near the building of the presidential administration failed.

Tensions trying to take advantage of Russia: its security services with the mediation of marginal groups of Ukrainian nationalists sent to Kiev weapons. In turn, the Russian agents on the anniversary of the revolution of dignity tried to organize new mass protests to provoke bloodshed. However, the Moscow plan failed, as both sides of the internal Ukrainian dispute showed political maturity.

The Prime Minister Groysman met with the organizers of the blockade of Donbass and agreed that they would not hold further demonstrations, and the authorities will not attempt to remove the blockade by force. No influential political force in Kiev does not want escalation of the conflict.

Trade with the occupied part of the Donbass did not cease even during the fiercest fighting. Why is it stopped now? Perhaps some forces are trying to hold early elections. It is possible that the oligarchs who want to increase their share of the proceeds from “blood trade,” conceived of its own intrigue. What is the most painful blockade caused by Akhmetov. His holding “Metinvest” announced the suspension of work at Yenakiyevo steel plant and the enterprise “Krasnodonugol”, which are in the occupied zone (the taxes they continued to pay Kiev). Under threat were also the activities of the enterprise “Azovstal” metallurgical plant named after Lenin under the control of the authorities of Mariupol. Problems arose and those factories in the occupied zone, which do not reach the supply of raw materials from the Kiev-controlled territories. The first (in early February) stopped production plant in Alchevsk, at the end of the month did the same in Donetsk metallurgical plant.

Against the embargo actively advocated “people’s front”. This is not surprising: the party of Yatsenyuk original was the main ally of Akhmetov. Party consisting of the interior Minister Arsen Avakov called for the force to end the blockade.

A demonstrative step of the Kremlin

The reaction of the rebels was followed a month later. 27 February, they issued an ultimatum and demanded to lift the blockade of railway lines linking the Donbass and the rest of the country, threatening seizure of Ukrainian plants. Kiev did not answer, then on March 1 the leader of the Donetsk separatists, Alexander Zakharchenko said that “people’s Republic” introduced external control 40 enterprises. Poroshenko said that Russia confiscates Ukrainian assets, and make another step towards the annexation of the Donbass. In turn, the security Service of Ukraine distributed information that she was able to intercept a telephone conversation with Zakharchenko “the citizen of the Russian Federation” on the further fate of the nationalized companies.

The Russians are planning to sell their most attractive assets in the Donetsk region, the oligarch Sergey Kurchenko, who fled to Russia. Kiev will cease to receive tax deductions, and proceeds will go to Victor Yanukovych and his clan. The rebels say that they will be able to reorient production to Russia. The problem is that demand for Donbas products there. In the Russian market already have almost everything that is in the “national republics”. If Ukraine will not buy coal, sell it did not succeed: the Russian raw materials cheaper. The chances of legal exports to third countries is not the same. In this case, Moscow will have to increase their subsidies, and even the message that since March 1 in the LC, the main currency was the Russian ruble it rather not happy. First, those who call Russia a party to the conflict, had another argument. Secondly, the ruble comes to the territory, the place where a military conflict, but it weakens its exchange rate and hurting the Russian securities.

Totally different subject — adopted on 18 February, the decision on the recognition of documents, which the authorities “people’s republics” is issued to citizens of Ukraine and stateless persons residing on their territory. This is purely a political and propaganda move because it does not entail a formal recognition of the DNI and LC. It was the reaction of Moscow to the position of the new American administration on the Russian-Ukrainian conflict. Russia has decided to apply a signal to the West that she was not going to give in. Putin hints that he may at any time to begin the deepening process of integration of Donbass with Russia. At the same time there are “trial balloons” in the form of various “peace plans”. Over the last couple of weeks there have been several such projects: “the plan of Manafort”, “Yanukovych’s plan”, “plan Taruta”. The most discussed was the “plan Artemenko”, which wrote the New York Times. All these projects have one thing in common: they entirely can not accept neither side of the conflict, and some of their items look more favorable to Moscow.

No matter what written plans, the complete blockade that Moscow will take the rebels in the near future in the Donbass will not change anything. At least his status will remain exactly the same. Right now in polls for the recognition of the independence of “people’s republics” expresses only a quarter of Russians.