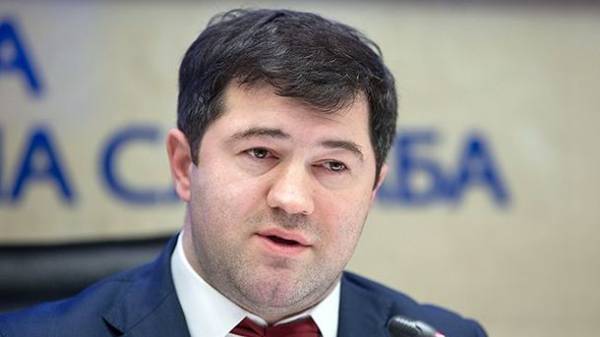 The arrested suspended from his duties as head of the State fiscal service of the Roman Nasirov his wife posted bail in the amount of 100 million UAH, according to the Specialized anti-corruption Prosecutor’s office (SAP).

“Today, the wife of Roman Nasirov, who is suspected of committing a crime under part 2 St. 364 criminal code of Ukraine (abuse of official position, entailed heavy consequences) has made a cash Deposit, determined by the ruling of the investigating judge of the solomiansky district court of Kyiv on March 7, 2017 in the amount of 100 million UAH on a special account of Solomyansky district court”, – is spoken in the message published on the SAP page on Facebook on Thursday evening.

The Prosecutor also assured that they will provide all legal measures to adequately participate Nasirov in investigating and reminded entrusted to him according to the court duties.

In particular, the head of the SFS is obliged to arrive to the detective, Prosecutor, investigating judge and to the court upon request, to wear an electronic monitoring means (electronic bracelet), is not absent from the locality in which it is registered, resides or is located without the permission of the investigator, Prosecutor or court, to notify the investigator, Prosecutor or court to change their place of residence and/or workplace, to refrain from communicating with other suspects in criminal proceedings.

Nasirov also obliged to Deposit to the State migration service of Ukraine the passport (passports) for traveling abroad and other documents granting the right to departure from Ukraine and entry into the country.

“In case of failure of the suspect to the aforementioned duties, the prosecutors SAP will apply to the court about election of a measure of restraint in form of detention. Prosecutors procedural heads of the detectives NAB is mandated to monitor compliance with procedural obligations Roman Nasirov”, – reported in SAP.

While Specialized anti-corruption Prosecutor’s office reminded that a cash Deposit is not damages, and is a preventive measure aimed at fulfilling the suspect of his procedural duties.

“In case of neglect of the mortgagor… the Deposit in the income of the state and credited to the special Fund of the state budget of Ukraine and used in the manner prescribed by law for the use of court fees”, – stated in the message.

Speaking about the obligation of wearing an electronic bracelet head of GFS, SAP expressed the hope that “the National police will be enough electronic controls for the suspect and they are applied immediately immediately after the release of the Roman Nasirov outside the jail”.