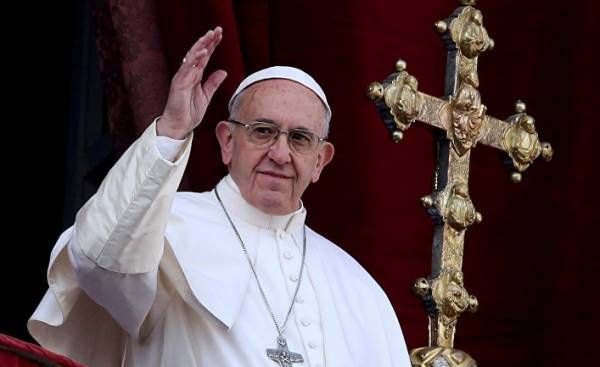 No, Francis is not a Communist, despite the fact that driving around Italy carnival carts have replaced the hammer and sickle on the cross pastoral staff of the Pope, and on his head he wore a red-and-black beret Che Guevara. This so impressed the public that even appeared on the pages of the newspaper Financial Times, not sedevacantists publication on the planet. In dad’s commitment to communism certainly confident billionaire Ken Langone (Ken Langone), threatened a couple of years ago Timothy Dolan (Timothy Dolan), Archbishop of new York that will not allocate a single dollar to the restoration of St. Patrick’s Cathedral. Too hard heard the sermon of the Bishop of Rome, too far from the paradigms that were prevalent at these latitudes during the last three decades.

Of course, no spiritual calm is not brought and what was told in the interview then turned into a book (“Pope of the people”, “Papa del popolo”), mentor Jorge Mario Bergoglio (Jorge Mario Bergoglio) Argentinian theologian and Jesuit priest Juan Carlos Scannone (Juan Carlos Scannone). Trying to dispel doubts about the alleged anti-Americanism of the Pontiff, he said that “we are not talking about suspicion toward the United States as such, but to the US as hegemony. The Pope does not support the hegemony, no matter what happened.”

In short, if there is no Pro-Communist bias (in the end, the same was said about John XXIII and even Paul VI, even in this case it was preferred to sweeten suspicions, commenting on just the “left” views), about the revolution is debatable. “While we can say that revolution is a word that is so frequently abused that by repeating it, you risk it to go astray, trying to put everything in context,” notes Professor Zanatta Loris (Loris Zanatta), historian of international relations of Latin America at the faculty of political science of the University of Bologna. “I encounter many genuine fans of dads, educated, smart people who often called him a great reformer. But Francis is not a reformer, not peculiar to him even reformist view of the world. Bergoglio — revolutionary”.

Do not think about revolution of the system about the “viri probati”, what reflects itself dad: here we are talking about the possibility of the ordination of adults, even married men of firm faith, to fill the shortage of priests in the most remote regions of the world. In some areas of the Amazon, for example, communion is held a few times a year, as nearly 700 thousand believers do not even 30 priests. It is also important to think about the fact that the Curia turns into a kind of crystal candy, transparent Louvre pyramid Mitterand. No, the Pope is “a revolutionary in the sense that is widespread in the imagery of Latin American Catholicism. Here the term “revolution” means nothing, as a secularized form of salvation. Francis — continues Zanatta, apocalyptic vision of the world, in which he proposes a revolution. He is not inclined to compromise, he has a Manichean, simplistic view of the world.”

And it sets the fashion, love, is understanding, and it’s not just about the media, about the image “pop Pope”, and not just about gadgets with the image of a shining profile of the Bishop of Rome, which are sold in the most unthinkable places. We are talking about something else entirely: “In the collective imaginary, in the system of values of people, there is a strong desire to simplify. This reality is too complex, so as a result people begin to appreciate extreme forms of simplification, a ruler possessing incredible power.” Examples of this can be found a lot, just look at any prepared or spoken off the cuff the Pope’s speech.

Professor Zanatta does not dig in the archives, preferring to return just a few weeks ago, to the conversation of the Pope with the students of the University of Rome III. Francis says prepared on the occasion of the speech and improvising. He talks about youth unemployment, about the lack of work that can lead to drug addiction, to recruit the ranks of jihadists or suicide. Then he sits on his favorite skate, speaking about the gap in economic terms between the North and the South of the world. “When I read these passages, I came up with the theory of dependence, which was in Vogue in Latin America in 1960-1970-ies, that is, the opposition between the evil rich and good poor.” To quote the words of father raniero cantalamessa, the (Raniero Cantalamessa), preacher of the papal household, between Apolona rich man and poor Lazarus.

North against South, wealth against poverty. “It’s a bit outdated vision, which, however, was widely spread in the context where he grew up and was educated Bergoglio”. Let’s face it: “It is a concept that promotes victimiza and absolve themselves of responsibility. Around and only heard that institutions do not work, nothing works, but we are not to blame. At the same time, halfway around the world develops a sense of guilt, which contributes, among other things, the reading of such books as “the Open veins of Latin America” Eduardo Galeano (Eduardo Galeano), which has long remained one of the best selling Italy books on Latin America. This victimism in its pure form, but it is able to create a powerful system images.”

The objection is that the Pope, in fact, does not say anything new. Any word you can find, flipping through the Bible, and to notice, really, would be enough to treat it like you treat your smartphone from time to time to look into it to carry in your pocket. In General, a real revolution would be the following: in absolute and simple the Word of the Lord which, as we know, came not from the mouth of Karl Marx or recently deceased Comandante Fidel.

And criticism in relation to the market, thus, becomes nothing more than a natural contextualization of the Christian message in the current situation. “Of course, this is a possible reading of the gospel, but this does not mean that other popes have betrayed the gospel or didn’t know him. The fact is that, unfortunately, a call to remember the gospel immediately destroy any discussion,” continues Zanatta.

“All the popes have referred to the gospel, but not all offered the same reading it. When Pope Francis speaks about the market, it seems like he’s talking about the devil, almost as much as the priests once said about sex. From his speeches, and a performance at the University of Rome III this only confirms, it appears that evil is the market economy as such.”

Zanatta tells about the desire to simplify. This term is often heard in the words of sociologist Luke, Diotallevi (Luca Diotallevi). “If you don’t go into the details, Bergoglio certainly appear to be an innovator, despite the fact that it is often misunderstood, as that is especially true for Italy, we refer to the left direction, that in fact is a consequence of Peronism, and he to the left currents does not apply. A bit lost in this question, you begin to realize that, in fact, this Pope is the third attempt to resolve the dilemma of Paul VI, to answer this big and serious question, and unanswered”.

The Church living in the secular world, expect profound transformation, we read in paragraph 28 of the Encyclical “His Church”, contains the program of the pontificate of Paul VI: “At this time, humanity is on the verge of great changes, revolutions, developments, they are profoundly changing not only its external way of life but also a way of thinking,” wrote Montini in 1964. “His way of thinking, culture and spirit are undergoing a profound transformation, not only in the scientific, technical and social progress, but also the currents of philosophical and political thought, which seize it and penetrate inside. All of this, continued the Pope, as the waves of the sea, covers and shakes the Church: the souls of the people who trust her, exposed to the strong influence of the atmosphere of the secular world; there is a danger that it will knock them out of the way, stunned, discouraged, shake the firmness of the Church and will certainly stimulate the adoption of the strangest trends. So the Church can excommunicate herself by adopting the latest and unimaginable forms of life.”

So, “here is the whole drama of modern Catholicism, here lies the greatness of Paul VI, which is both a greatness Lombardo-Trentino traditions of Catholicism”. The difficulty is that no one still could not give an answer to this contradiction, according to Diotallevi: “Even the greatest theologians, for example, Von Balthasar (Von Balthasar) and De certeau (De Certeau), it is difficult to maintain a high level of complexity. The first leans towards theology movements, and the second to theology certificates lively and impregnable faith. Thus, I would say that Francis is in some way turned out to be a product of this situation.”

Talk about a revolution, therefore, can shift the center of gravity of the problem. “The fact that today the institution of the Church requires a complex organization (both internal and external), which in the absence of clear guidance may result in rise of elite Christianity for the elite. Paul VI in 1964, is well explained as no more after it. Since then, from Wojtyla to Ratzinger and Bergoglio to the advantage given is always the most simple ways. Even the permanent speech of the people (outside of the manifold generated by the horizontal and vertical structure of Brescia democratic principles in which I was raised Montini) are nothing more than simplification”. Successful simplification, given the wide range followers, this pastoral strategy like and, as emphasized by the sociologist: “regardless of what she may be directed, as a result, it can create a deviation from the whole complex of conflicts concerning not only the Church but the world.”

In this quest for simplification, in this case, it becomes possible to find even “objective and not a software” convergence of views Francis, Donald trump and Putin. “All of this should not be surprising,” emphasizes, Diotallevi and adds: “How many times have we heard the Pope talking about popular movements, emphasizing the three “T”: tierra (earth), techo (house), and trabajo (work)? That’s what he was talking about Bergoglio, but, in fact, said the same thing and Peron. But it could tell and Vladimir Putin, Donald trump, and marine Le Pen”.

In short, Francis offers another option of finding more simple solutions to complex dilemmas of Paul VI. All of these answers drives you to a lower level, and that you point out, there is no lack of respect. Even De certeau could not stand the study of this complex.”

Necessary clarification: “it’s not that Bergoglio lacked something, just challenge myself a very ambitious”. It really takes the right and left. “If you restrukturisasi Church and doctrine, it becomes difficult to determine whether you’re a follower, for example, liberation theology. Francis refuses the mediation of the Church and will be given to the public opinion.” Here reminded of the Peronism, “which is a complex and misunderstood structure incorporating Cristina Kirchner (Cristina Kirchner) and Maradona. It’s paternalistic and authoritarian movement.”

Real revolution, according to Diotallevi, would be to revise the papal dignity, to its decline: “the Pope who would sit at the Lateran, would destroy at the root of the pyramid, forced the Bishop of Rome to sit on his natural throne, and in the Cathedral of St. Peter. Understand, this is a very difficult thing. However, it would be good as the move in the House of St. Martha, which is also a good thing”.