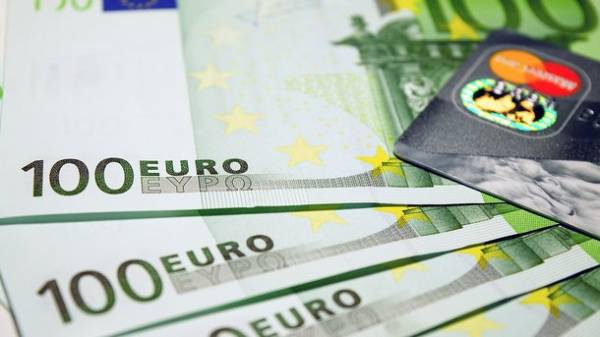 The Agency search and management of assets (ARMA) started forming teams kicked off competition on replacement of posts from leading specialists and heads of departments. The set command is the first step to get started a new body. According to the head of the Agency Anton Yanchuk, get to work it will be able already this year, albeit not 100% of its capacity. “Today” figured out how to deal with the new Agency.

What is ARMA and it will work

The national Agency for the identification, investigation and management of assets derived from corruption and other crimes (Agency for search and management of assets, ARMA) was established in February 2016, the Cabinet of Ministers of Ukraine on the basis of the relevant law about this body, adopted by Parliament several months earlier. The creation of this Department is one of the requirements for liberalization of the visa regime between Ukraine and the EU.

Before the emergence of a specialized Agency, a search of assets – money, goods, property, and other rights – had to deal with investigators. Now this function is delegated ARMAGH. The Agency will conduct the investigation upon request from law enforcement agencies in Ukraine and abroad, as well as similar institutions in member countries of the EU, which are engaged in search of its assets in Ukraine.

Another key feature of ARMA is the effective management of these assets, that is, the preservation of their economic value until they are used. In addition, on fixed the function of formation of state policy in the sphere of management and investigation and creation of a Unified state register of assets that were seized in criminal proceedings. In addition, ARMA will participate in the representation of interests of Ukraine in the courts – both state and foreign.

However, as noted by the head of the Agency Anton Yanchuk, ARMA is though significant, but still only part of the system for asset recovery. To take a decision on recovery of assets in favor of the state and to investigate criminal proceedings the office may.

“The process of so-called return of assets is a process that involves a number of public authorities, regardless of, it is Ukraine or member state of the EU. In any case, in this thread and involved law enforcement agencies who are investigating criminal proceedings. In any case, in this chain involved the judiciary who make judicial decisions according to which certain assets or returned to the state, or a criminal proceeding ends in acquittal. This process also involved the bodies of the financial intelligence, the foreign intelligence Agency asset recovery. In other words, ARMA in Ukraine or in any EU country is not an analogue of the courts or law enforcement agencies or a specific Agency that can all of them replace one of their existence. Main mission of the Agency is to assist law enforcement in search of evidence of criminal origin of property,” he said.

To search for assets of ARMA will be on open data, with direct access to public databases and sharing information with similar institutions in the member countries of the EU. The EU delegation in Ukraine has already begun cooperation with the Agency. So, the Consultative EU mission in Ukraine (CMEs) and Anticorruption initiative of the EU in Ukraine (EUACI) will assist the office in the period of its formation. Moreover, CMEs now thanks to cooperation of Ukrainian and similar agencies in the country, the EU got better faster. In the future it is planned to conduct trainings, consultations and study visits for Ukrainian specialists.

“We are already working together, help to create a structure that will help in staff selection and training, we will help with technical support, consultations. And, of course, the main thing is international cooperation. We are experts who have years of practice of such activities, they are able to do it, they know which channels of international cooperation there, as it is faster to do. Our experts are ready to help, – said the head of CMEs kęstutis Lanchinskas, the Success of ARMA will depend on how quickly they work, and what working relationships will be established with other law enforcement agencies responsible for fight against corruption”. 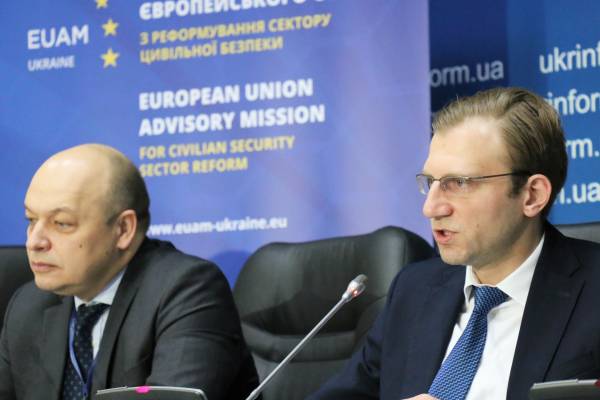 Anti-corruption initiative of the EU in Ukraine, in turn, will assist the national Agency assistance processes and personnel management. “When we talk about an integrated approach, we mean aid that is needed for the development of human resources at the highest level have to perform their functions, but material and technical base, which is needed in order to perform their functions at the highest level, to become a full-fledged part of the European network that exists to effectively fight across Europe with corruption actions”, – said the head of anti-corruption initiatives of the EU in Ukraine Eka Tkeshelashvili.

All in ARMA will work to 130 people. The selection process for positions has started recently. It is planned that by the end of 2017 will be held several stages of competitive selection, in which the Agency appears 80 employees.

“Of course, we are interested in the set in the first place quality professionals, but given the fact that the Agency will perform, is fairly new to Ukrainian law enforcement field, trained staff at 100% for these areas can hardly be found in Ukraine. However, there is a certain list of professions and activities, where we can find the appropriate personnel potential”, – said Anton Yanchuk.

First and foremost, we are talking about the nominations of investigators, lawyers specializing in corporate and tax law, tax specialists, auditors, civil servants, etc.

The salary of the staff of the ARMA is tied to several factors, such as experience in the civil service, or other professional qualities, which can affect its size, but the final figure “will depend on the budget possibilities,” says Anton Yanchuk. According to the head of ARMA, it is planned that the salary of the specialist will make about 20 thousand hryvnias. At the same time, it is bound to the concept of salary – a certain amount of minimum wages. The law on the national Agency noted that the salary a leading specialist and expert of the first category – five times the minimum wage, that is 16 thousand hryvnia. The salary of a Deputy head of Department – 11 minimum wage, that is 32 200 UAH, and the head – 20 times the minimum wage, which amounts to 64 thousand hryvnia. In this case, the Agency head and his deputies will receive the allowance for the special nature of the work and the intensity of labor is 75% of the salary including allowances for the rank.

As a plan at the Agency until the end of 2017 should be conducted in three stages of the competition created by a Public Council, provided the material-technical base and established contacts with European and international organizations in asset recovery. In addition, during this time, should be created the necessary tools and regulatory framework in the field of tracing and ARMA join all necessary state databases.

We focused on the fact that the functions of investigation and management earned in 2017. Maybe not 100%, but, at least, have become so that the Agency could implement them

“We focused on the fact that the functions of investigation and management earned in 2017. Maybe not 100%, but, at least, have become so that the Agency could implement them,” said Yanchuk.

With regard to the Unified state register of assets seized in criminal proceedings, it is planned to be launched in 2018.

In the draft budget for 2017 pledged 10.5 billion hryvnia of income for the confiscation of money and funds received from the sale of property by court for committing a corrupt or connected with corruption offences, noted in the analysis of the experts of the Center of counteraction of corruption. In fact, in 2016 (data from January to September) budget was laid down 7.7 billion hryvnias, and the actual income amounted to 149 193 hryvnia, that is 0,0019%. For comparison, in 2015, the budgeted amount was $ 1.5 billion, and back – 100 093 hryvnia, or 0,0067%. 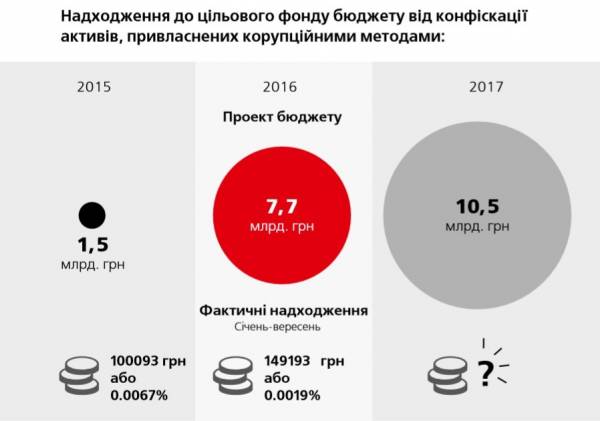 At the same time, only according to the State service for financial monitoring in relation to the ex-President of Ukraine Viktor Yanukovych and officials of his times in the period 1 March 2014 to 1 October 2016 was prepared 505 synthesis of materials and identified suspicious transactions in the amount 176,6 billion UAH, noted in the analysis.

On the territory of Ukraine on the accounts of natural persons scfm blocked 313,3 million, 30.5 million dollars, five million euros to 21.7 million Russian rubles from 6.8 million in precious metals and shares worth 1.1 billion hryvnia.

At the same time, experts of the Center of counteraction of corruption, despite the statistics found drugs, the percentage of their return is extremely low.

At the same time, the budgeted funds from the return of assets will be directed to the trust Fund for the security and defence of Ukraine. However, over time revenues to this Fund was meager.