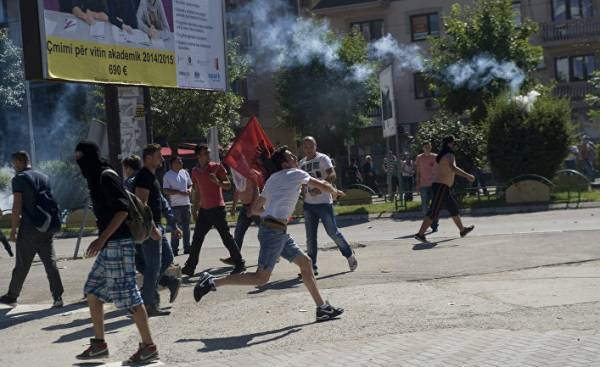 In the nineties, Europe has not done what should have been done when a bloody civil war tore Yugoslavia apart. We had so many things that could draw attention that we completely forgot to monitor what is happening in the Balkans.

If you can reproduce the story?

Recent developments are cause for deep concern in Europe, we care so much about Putin, trump, Erdogan, Wilders, Pexit and other troubles that there is no possibility to concentrate on other problems. However, there is a special reason to do it now, because Russia today is much more active than before. Appetite increased Putin after Ukraine and Syria. Currently, there is a temptation to create problems to the West in the Balkans. Here are a few recent events, which ought to tell you on the front pages of Newspapers in Europe and the United States.

A few months ago in Montenegro attempted coup, plans which, apparently, was to assassinate a Pro-Western President. It is assumed that everything was organized by Serb nationalists. Now it turns out that Russian security services took an active part with the aim to substitute the leg of the forthcoming accession of Montenegro to NATO.

From Serbia to the border with Kosovo was sent to train with big posters, where different languages was written “Kosovo is Serbia”. The train came from Russia and were stopped at the border. This led to a sharp exchange of views between the presidents of Kosovo and Serbia and soothing “warnings” Russian Minister of foreign Affairs. The idea was that militant Serbs with Russian support planned to carry out “Operation Crimea” in Northern Kosovo around Mitrovica, where 50 thousand ethnic Serbs.

In Macedonia, Russia intervenes in a very dangerous political conflict between leading politicians. And in Bosnia, Bosnian Serb leader Milorad Dodik requires the output of the common state and the autonomy of Republika Srpska. Russian support Dodik. The us government has imposed sanctions on Dodik and warned that there is a risk of a new conflict in Bosnia because the Serbs led by dodika broke the rules enshrined by the Dayton accords, which stopped in 1995, a bloody civil war.

Europeans, it seems, did not pay attention to what is happening…

Thoughts back to the events that took place 25 years ago when we also did not pay attention to the signals about what was going to happen. In June 1991, in Berlin there is a meeting of foreign Ministers within the OSCE (conference on security and cooperation in Europe), where representatives of 35 European and North American States together with the Soviet Union, rejoiced in the success achieved. In the final statement did not say a single word about Yugoslavia. But one app still was a link to an explanation from the Minister for foreign Affairs of Yugoslavia, where it was said: “Ministers expressed their friendly concern and its support for democratic development, unity and territorial integrity of Yugoslavia…” and we encouraged all parties to continue necessary work to ensure a peaceful solution of the existing contradictions.

Literally a week later the armed forces of Yugoslavia (dominated by Serbia) entered the territory of Slovenia. The civil war became a reality.

In our defense, we can say that there were a lot of other issues filling our agenda: the fall of the Wall, the first Gulf war, the reunification of Germany, the establishment of democracy in Eastern and Central Europe, etc. the rest not enough time.

Exactly the same as it is today.

Later, in the summer of 1991, the European economic community (which became the EU) sent to Yugoslavia so-called Troika of foreign Ministers. It was the Minister of foreign Affairs of Luxembourg with his colleagues from the Netherlands and Italy. They held meetings with all the leaders of the republics that later became independent States, and all solemnly promised to behave decently. The Ministers of foreign Affairs was so happy to hear that the head of the delegation of Luxembourg Jacques Poos (Jacques Poos) at the final press conference in Belgrade said the famous words, which later was very tormented by it: “It’s time Europe, not Americans!”

And a real war began, stopped only after massive U.S. intervention, led to a truce and peace Treaty in Dayton after only Bosnia killed more than 100 thousand people, and many fled the country.

But the Dayton agreement was not perfect, and its implementation requires considerable external pressure to force the parties to comply with signed commitments.

There is a risk that us interests will be severely weakened due to the fact that the White house has settled the trump (Trump), and the interests of Europeans, due to the fact that the internal problems of the EU strangled hope for expansion, which is expected the Balkan States in the future. Macedonia is a separate question, because the Greeks all the time opposed to turn the country into the Western cooperation bodies.

What is happening now is dangerous.

Therefore, the EU leaders must take seriously these issues and to take part in the events in the Balkans. The EU can offer much more than Russia. And much more to lose if will start again bloody conflicts. This time there should be a “Europe”!