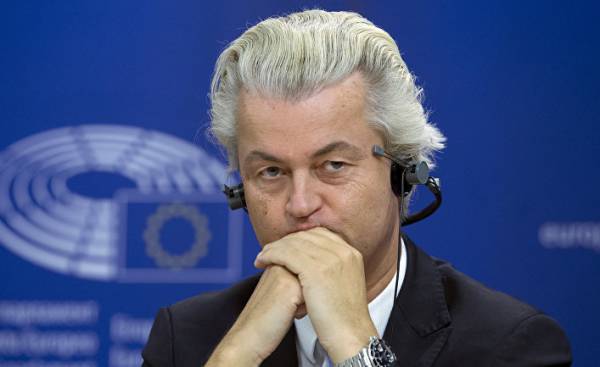 Mark Rutte (Mark Rutte) is the most successful liberal politician of Europe. It is true his party will lose almost a quarter of mandates in the chamber of deputies at the Hague. Nevertheless, the Prime Minister of the Netherlands is the main winner of these elections. Third time in a row the right-wing liberal people’s party for freedom and democracy (VVD) is the strongest party in Parliament, and with a solid margin.

A few weeks ago it looked as if the win-right populist Geert Wilders (Geert Wilders). A few days ago, the six parties was at least the chances of outsiders to occupy the first row. But now Rutte is clearly ahead: thanks to the two populists who constantly insulted.

A clear victory in the elections Rutte was facilitated by father Turkish: Recep Tayyip Erdogan (Recep Tayyip Erdogan). Rougher than a despot from Ankara insulted the Netherlands, the Dutch rallied around their Prime Minister. And that with great professionalism took advantage of this crisis: Rutte outlined some red lines when it initially did not allow the landing of the aircraft with the Turkish Minister of foreign Affairs, and then politely, but very definitely escorted with the escort of his country’s Minister for family Affairs. After the scandal Rutte acted as a mediator. Instead, after attacks Erdogan to answer him in the same dramatic spirit, he was invited to lunch with Prime Minister erdoğan, Binali Yildirim of (Binali Yildirim). And he agreed.

During a television duel with Wilders this past Monday Rutte pinned to the wall his opponent. When the far-right demanded to kick out the Turkish Ambassador, Rutte replied coolly: “that is the difference between tweeting from a Bank or to govern the country”. And the pragmatism the Dutch are very appreciated. In the last days before the vote, Rutte received additional decisive votes, which allowed him to break away from Wilders. So far Rutte won from falling of popularity of his opponent than from his own strength.

In the past years, Rutte broke some campaign promises. Therefore, his party and losing almost a quarter of the seats. But his main theme he presented convincing evidence. The Dutch economy is once again successfully developed long after the crisis: with two percent economic growth and unemployment, which declines towards the five percent mark. This is due to the exceptional international interweaving: a small country with its 17 million inhabitants exports more goods than the UK or Italy.

What will happen now?

Rutte must now create a completely new coalition. Because of his former coalition partners, the social Democrats, have disappeared from the political arena. Unhappy accuse them of rigidity of the social reforms of the government. Now Rutte will need probably at least three coalition partner. But he can choose between four centre parties: the Christian Democrats, left-liberal Democrats 66 (D66), strong green and social Democrats. Thus he will be able to play them against each other and almost nothing to give them. Angela Merkel can be happy that Rutte remains at his post. On many issues it is, perhaps, its most important ally in the EU.

Why Wilders was defeated?

For himself. For many months he was leading in the polls, now he can even the second place to lose the Christian Democrats. His one man party PVV does not reach, perhaps, even the election results of 2010. And guilty in it only its only member.

“The PVV was not visible in the election campaign,” says Amsterdam expert parties Tom van der Meer (Tom van der Meer). Wilders refused almost all of the televised debates during the election campaign of his rarely seen on the street. But there is a “normal Dutch” the voice wanted to get the man with the hairdo of Mozart. However, no one important Dutch policy there is a negligible direct contact with the people, self-proclaimed tribune of the people, which is guarded around the clock for twelve years. Almost his entire campaign Wilders led using a mobile phone. Here he writes on Twitter as boldly and radically as its model Donald trump. But the American is not confined to Twitter. He brought joy to people at campaign events and distributing pictures of jubilation.

Openly demonstrated their admiration for the trump ultimately ruined Wilders. Because of the radical, chaotic American policy, even in the opinion of many of his most loyal supporters through the roof. Not to mention the many undecided voters who was sympathetic to him. Rutte is understood and formulated in one sentence: “Geert Wilders is chaos.”

What will happen now with Wilders?

It will continue. For this man from Venlo the outcome of these elections is perhaps the most bitter defeat of his political career. But retirement? This is not the way. Who could then overthrow? He is the only member of the PVV. And what else have to do this 53-year-old man for the rest of his life? Friends, according to his brother Paul, he is almost there, with members of his family, he quarreled. And sooner or later, he hopes, will come his time. A new refugee crisis, the crime wave among foreigners, terrorist attack, or simply discontent with the new government, he believes, is enough to have again increased its rating. The role of the main opposition right-still fits him. And he should not be in government to implement at least part of its political program. “Wilders is again pushed more to the right Rutte and the Christian Democrats,” says the political scientist van der Meer.

Is stopped the advance of right-wing populism in the West?

Possible. 2017 will be the year “when you awake peoples of continental Europe,” predicted recently, marine Le Pen (Marine Le Pen). The Dutch have awakened politically and crowds ran to the polls — but not in order to vote for Wilders. Already elections in Austria showed that there is no European Domino effect. However, Le Pen still has a real chance to become French President. Her “national front” is much deeper penetrated many layers of society, is politically more tenacious and is able to win a majority than a party of one man, a sharp Wilders in the Netherlands. However, the results in the Hague — it is a blow to Le Pen. If Wilders took first place, she could argue that the positions of the extreme right have become secular in Europe. Now she must hope that her supposedly the main enemy of Emmanuel macron (Emmanuel Macron) will make mistakes or be subjected to any scandal.

Also ADG (Alternative for Germany — approx. transl.) not happy with the defeat of Wilders. The party already loses points in the polls since then, trump entered the White house, and Martin Schulz (Martin Schulz) has been elected a Chancellor candidate from the SPD. Frauke Petry (Frauke Petry) continuously posed next to the Wilders in the hope that he will be the winner in these elections. Now she has the same problem as him: her favorite subject, the refugee crisis disappears from the headlines.

“Nexo”, the output of the Netherlands from the EU ceases to be the theme of the day. This idea exists primarily in the brain of Wilders. None of the countries is not so connected with the neighboring countries as the Netherlands, the trade center of Europe. However, many citizens believe that the EU is of little use, except for free trade. In their daily lives they perceive Brussels rather as Moloch, which they themselves can accomplish little. It is appalling that in the province of Limburg, which border with Germany and Belgium is longer than the border with the rest of the Netherlands, fewer people are crossing borders in search of work than 40 years ago. This is primarily due to the fact that each national state has its own social and tax system, not paying attention to whether they answer at least approximately to those in neighbouring countries. As long as decision-makers in Brussels and in the capitals won’t be able to explain the citizens the advantages of a United Europe, the EU will not be able to get out of its crisis.