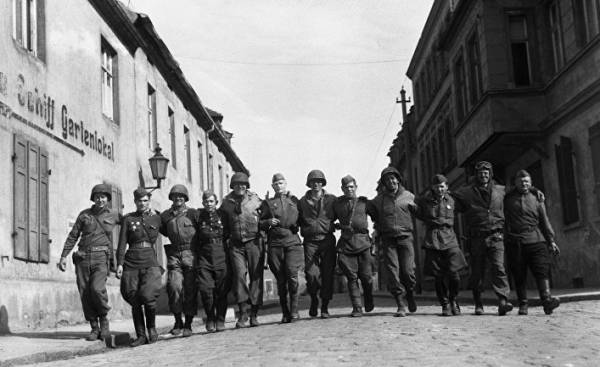 In the old days, when the world was stronger and fitter (and America won all the wars that have joined), I served in the second battalion of the 273rd infantry regiment. We met the Russian army at the Elbe river, cutting Germany into two parts and bringing the war to its inevitable conclusion. Fulfilling orders, we waited patiently for the Russian, and like all Marines were thankful for the opportunity to relax and unwind.

Eventually they appeared, dressed in motley uniforms, and began a joyous greeting and a handshake. Since none of us spoke Russian and they could not speak English, conversations were limited to simple phrases on a primitive German. To speak it we didn’t like, but we were all happy. We showered them with gifts (they had nothing) and was happy that the war is coming to an end. Due to language difficulties, the celebration was quite restrained. Even making common photos, we could tell each other very little, except that “Hello” and “glad to see you.” As she said the phrase five or six times, we realized that the ideas have dried up.

Immediately after the war I was involved in the transport of former prisoners of war and displaced persons to their homeland. Facial expressions of those we transported, I realized that the Soviet power not as popular as claimed. But my observations don’t matter.

Then I was in a military administration there, and completed, finally, your military service.

Returning to America, I used a very generous benefits for veterans, educated, master’s degree, and began earning a living in the newly formed news Agency of the United States. We were instructed to present to the world America in its true light. I believed in what I was doing and I loved it.

At that time there was another happy event. I learned that someone in Chicago has created an American version of the Association of veterans of the Elbe, and the opportunity to hold a meeting in Moscow. We were told that the Soviet government will pay all our expenses, with the exception of travel to Moscow and back. In those days this ticket in two ends, for me, was too expensive, and I asked the local media if they need a correspondent to write about the Moscow meeting of the participant’s report. Two publications have expressed interest in this, and I was sure that my trip will take place. Before me shone a glory: their own paper indicating my name plus the wonderful opportunities offered by the publication of the first material. How fortunate for me!

Rain over me showered with congratulations, but I was informed that the staff of the Department of state must approve the itinerary. I happily went to the officer of the Soviet division, accompanied by one of the organizers.

The officer was a large man and seemed older than all of us. The conversation was surprisingly short.

“They will blackmail you”, he said.

“They will blackmail you. They organised meetings with women spies, who will arrange a provocation, inviting you in. They take pictures with us. Show them to your wives and you the end.”

“I’m sorry. But to blackmail you to be still”.

“Sorry? You want to say that I will not go, because you can make love to a woman?”

I felt like our curator soothingly put his hand on my shoulder, and heard him say: “Thank you for giving us your time.” The conversation, which was to lead me to glory, riches and fame, did not occupy a minute.

Dumbfounded, I went back to work. It was a wise decision, as I was not to talk. There I heard words of comfort, and then I fairly quickly returned to business as usual.

A year later a meeting place for veterans has become Washington, and I volunteered to receive and escort guests. I still do not know whether on the Elbe river, the Russian, whom I accompanied. But it didn’t make any difference. He was polite and friendly, but refused to go where I wanted him. And I couldn’t take him where he wanted to get it. It was pretty dry and fruitless meeting.

Soon after, I went on a three-year trip to India. This was the beginning of my diplomatic career. Sometimes I met with Russian diplomatic receptions and cocktails. About these meetings, I sometimes reported to his ambassadorial leadership, and sometimes not. Everything depended on the duration of the calls and their relevance to current Affairs. In General, our conversations were very reserved, polite and, frankly, pretty boring. We didn’t want to give the available information and tried not to do it.

I remember these episodes, because lately a lot of talk about the meeting with the Russians. Diplomats are professional speakers. In the negotiations they have to say. Scientists say: “Publicise or die”, calling it a success. Diplomats, being a professional negotiators must either agree on a process of negotiations or resign. It is important to know what people are saying, but as with everything, it has its limits.

Yes, in 1955 I shook hands with the Lieutenant of the Russian army. If you want to turn me in. In the end, the television media need something to fill your hour broadcast.

Arctic_Fox
Can say about Russia what you want, but it seems to me this country for the next few centuries is going to stay intact. Unlike the US, which under the leadership of left-wing progressives will slide into a new civil war.

Ringolevio
Deep observation. Russia is not fixated on world domination, she just needs self-preservation. This is quite reasonable, considering how she suffered during the two major invasions. But the United States, in contrast, obsessed with self-destruction.

msher_1
In the late 60’s I spent 10 days in the Soviet Union, arriving there as a tourist from Paris, where I studied. Do I need to report this and to whom? It seems that today “Russian connections” most of all interested in John McCain. I had communication with a guide from Intourist.

Ringolevio
And my dad loved the soup. Do not you think that this proves his dastardly plans?

Seldon
Dear Mr. McCain and Ms. Clinton!
I want to inform the authorities that the actor Jay Leno in the collection is “Volga”. He quite frankly spoke about it and even made the program. And he was screaming something in Russian out the window.
Your obedient servant, a citizen Seldon.