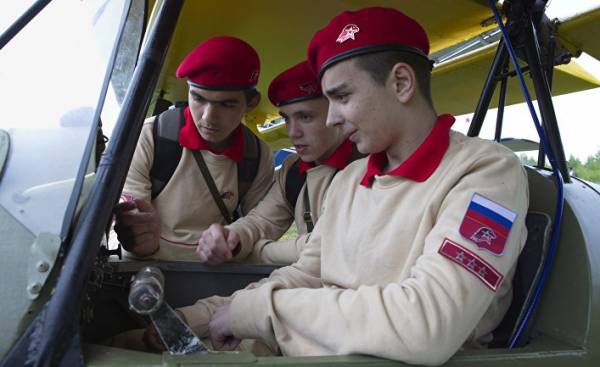 Sergey excited. Instructor in recent times shows him how to hold his hand when saluting. “It is impossible to shoulder SAG “, — he admonishes a 15-year-old schoolboy. Then Sergey again reads the solemn oath he will take. The oath of allegiance of Unirii, youth army of Russia, which accept children from ten to 18 years. For a student of Zhukovsky town near Moscow is a great event. A copy of the oath in his hand already dripping wet.

The admission of new yunarmeytsev takes place in a gym of school №12. Zhukovsky is the center of the Russian air and space studies, where he also trained test pilots for the MIG. In the Soviet Union this city was closed to foreigners, now it is open, foreign visitors can even take part in the competition of military-Patriotic youth groups, which will be held after the oath. Came dozens of Patriotic clubs of Moscow.

The head of city administration Andrey Voytyuk opens the event on his uniform jacket also medals. He urges the youth to the mandatory vigilance. Pathetic promises reflect the style of the new time. Voytyuk he went to the Afghan war, where he was responsible for transporting “cargo 200” — the dead in the Hindu Kush in zinc coffins. In 80-e their years was at least 15 thousand.

Finally it was the turn of Sergei. He marches to the center of the room, salutes, and says the words of the oath: “I solemnly swear to when joining Unarme the face of my comrades…” In the hall came a muffled noise. Friend of Sergei fainted. Behind Sergei the instructor in a hurry there, on the left flank. Schoolgirl take. Sergei can’t stop: “… to protect the weak in the struggle for truth and justice to overcome all obstacles”. he continues his oath. The noise, the excitement and closeness lead to the fact that another soldier faints. Sergei stoically continues. He managed and receives the coveted red beret, which makes him a young army man.

“Well done!” — praises his mentor, keeping in mind that Sergey is a real guy. After all, he did not give to balance what you want and at the front. Instructors are retired military, most of them were the last grinder of the Chechen wars. Some worked in the military secret service GRU. Tough guys. Sports and weapons is their passion, and of course, Russia too.

Chin up, chest out!

Dozens of youth groups arrived in Zhukovsky. For the last few years in Russia as from under the earth arose more than six thousand groups and military-Patriotic movements. The peak was in the time after the annexation of Crimea. Unarme should, ostensibly, to bring some order to the inconsistency of national rejoicing. The decree, the corresponding decree President Vladimir Putin signed in the fall of 2015 — Oct 29, the day of the establishment of the Communist youth Union — Komsomol.

Putin’s youth voluntarily marching in step. In the gym from the shooting range to the table with a chemical protection. They happily sing. Concerned parents shouting after their stooped offspring: “chin up, chest out! Damn it!” To this day, no one broke the record for putting on the protective suit and gas mask. The boys are obsessed with tubes, ties and buckles. The record is one minute and 15 seconds. The soldier in camouflage egged friends. In vain, only sweat, admit Maxim from the band “Warrior”. Warrior means “fighter”. With the decline of the “warrior” hiding bulky transcript — “true national history of the people.”

“Girls our secret heroine,” — said Maxim without envy. No one has ever collected or disassemble a Kalashnikov rifle as fast as one girl in his group. “Girls are better to carry the load, they are more hardy and persistent,” whispers the Light. 15-year-old girl native of Zhukovsky, her parents are military. According to her, she knows only this world. My parents don’t have much money, she says. Light spends his spare time in the group, which in the former Stalingrad and other places of fights of times of Patriotic war — as in Russia called the Second world war — is engaged in search of remains of fallen fighters. The findings laid out in front of the girls on the table. Rifles, helmets, knives, mines.

The group is run by Alexey Sokolov, veteran of the Union of Soviet officers. He was particularly interested in the Norwegian Bank under the sprat of the stocks of the Wehrmacht. One soldier opened the jar with a knife. And the loop for opening banks remained intact. “This he did not know,” laughs instructor and talks about the cultural backwardness and vandalism that have befallen the Reichstag. Sokolov is proud of. Speaking of the Reichstag, with the wards to train in street fighting in the military Park of rest “Patriot” near Moscow, where the planned construction of the layout of the Reichstag? Question him unpleasant. Better leave it, he says affably.

Along with physical education and military science, the program has a history and military theory. “When young people ask political questions, we answer them,” says Ivan Vorobyov. “However, we want them to have created his own opinion, he adds. — If they do not understand, we explain again”.

Ilya Drobyshev particularly interested. “Sweat saves blood” — is written in black and white on his shirt. “If there is a military moment, we will be in the forefront and respond to the impact,” he says. His face becomes tougher. What does he mean? “War against Ukraine! I’m ready to fight there!” he replies, preparing for a jog in the clothing: flak jacket, steel helmet and a Kalashnikov. On a route it is necessary to overcome a smokescreen to transport the wounded. “How many of our soldiers have died in Ukraine”, —says excitedly Drobyshev. Perhaps the instructors still told them a little more.

The head of administration Alexey Voytyuk says bluntly: “We know where are the enemies, why can’t we call them by name?” He meant US, the West and Ukraine. Light also convinced that Kiev attacked Donbass and is now threatening Russia. But for 17-year-old he is clear: “We must be prepared for everything, but Russia should not show it”. In the summer of Agvan after receipt of the matriculation at the school will go to study in military College.

More recently, the military departments have become popular again. Currently, the competition is six people in one place. In Rostov-on-don already in kindergartens parades for children defenders of the Motherland. The militarization of society has moved far ahead. “It is a crime against the rights of children”, says Valentina Melnikova. She’s since 1989, directs the Committee of soldiers ‘ mothers, which protects recruits from violence in the army.

“Never thought I’d see the day in the life”, — said passing us in the lobby in Zhukovsky elderly man. 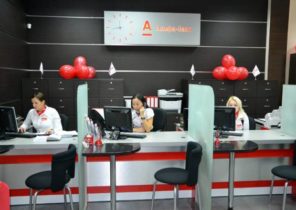 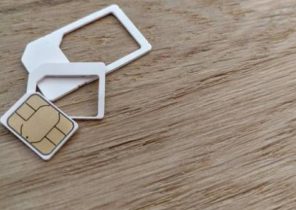