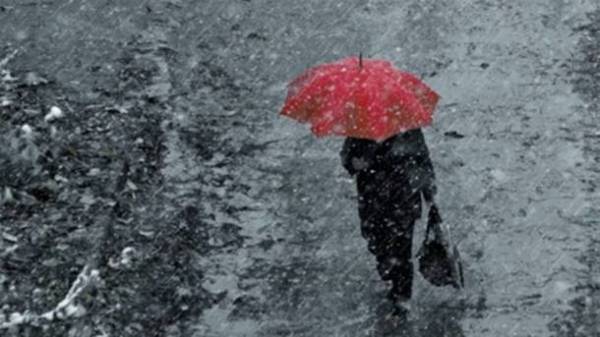 Ukrainians in the next few days, expect cold up to four degrees above zero. In addition, the environment in large parts of the country will pass heavy rains with wet snow. Relatively warm weather forecast in the South – here the day warms up to nine degrees above zero. The website “Today” found out what weather to wait for the Ukrainians this week.

On March 14, the temperature of the air in the West, centre and East of Ukraine will range within six to eight degrees above zero. At the same time in the South, the thermometer will rise to the level of ten degrees. In the North this day, according to the forecast of weather forecasters, the air warms up to seven to nine degrees. No precipitation is expected almost on the whole territory of the country, except the North, Vinnytsia and Luhansk regions. 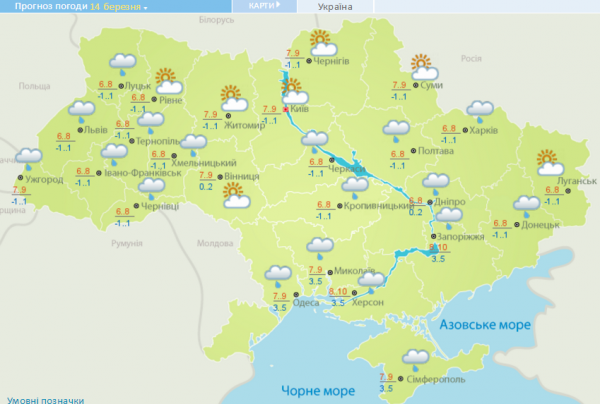 Wednesday precipitation in the West of Ukraine and in Kyiv, Cherkasy, Chernihiv and Sumy regions, the rest of the – partly cloudy. In the South the temperature will fluctuate within eight to ten degrees Celsius, on the East, centre, North and West – from seven to nine degrees. 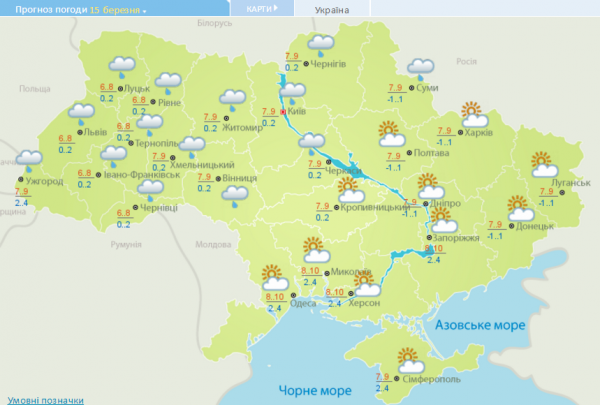 On March 16 in Ukraine is expected a sharp change in the weather. In the center, on the West and North will be rain with sleet, the rest of the strong rains. In addition, according to the forecast of weather forecasters, Ukrainians will see a slight cold. The thermometer in the capital will fall to five degrees above zero in the West to four degrees. At the same time in the South and East, the day temperature will rise up to nine degrees above zero. 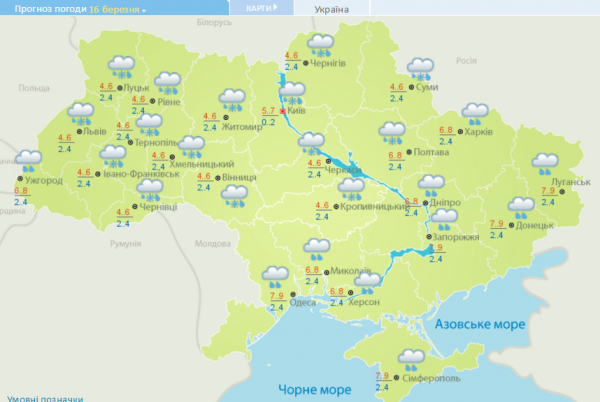 On Friday, March 17, rain the cyclone leaves the territory of Western Ukraine. The temperature will vary between three to five degrees above zero. In the North of the country is expected cloudy weather and the rest of the – rains. The warmest this day will be to the East of the country – there the thermometer column will rise to the level of nine degrees. In the centre and South the temperatures will vary between five to seven degrees above zero. 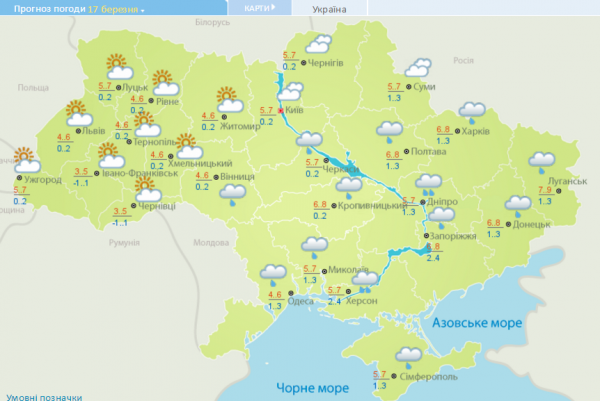 March 18 to the West will be heavy rain, in other territory – partly cloudy. The air temperature in the West, centre and South, will vary from four to eight degrees above zero in the East will warm up to six to nine degrees above zero.

March 14, according to the portal “the weather man”, the revered memory of pervomuchenika Evdokia. In the old days at Evdokia judged about summer and the future harvest: “What is Eudoxia, and this is summer”; “Chip a wind Evdokia, from there, all summer.” “If the rooks have returned to Eudoxia and summer will be wet and the snow come down before.” If March 14 is a snow with a rain and a warm wind is blowing, it means the summer will be wet; and the cold and the wind from the North – by the summer cold.

15 Mar revered the memory of the Holy Martyr Theodotos Kiryakova. Since ancient times, on this day watching what will be the summer. If a warm wind is blowing, then waited for a warm rainy summer. If snow, frost, North wind, the summer heat will not. And if in the morning to charge the rain, it will pour all summer long. And although the weather may still be cold enough this day to stop frost resistant.

16 Mar revered the memory of the Archpriest Pyotr Turchaninov. In former times, noticed what the middle of March – and this is summer. The peasants had a tradition to circumvent the criss-cross box, denoting the fact that the sun no time to relax, ought, they say, to moisture, snejina field water. From this day begins for farmers preparing potatoes for planting.

17 March is the feast day of St Gerasimos the Jordanian. The people Gerasim called the Rookery, because as of this day of warm countries arrive rook: “rook on the mountain – and the spring in the yard”. If the rook flew in a month the snow melts. When the rook from the ground with a stick raises – Sunny summer promises. If the rooks shout, so the weather will soon deteriorate (likely rain).

March 18 marks the day of memory of Holy Martyr Konon of Isauria. The people of St. Konon the Gardener called. This day started hot vegetable time. The people said: “Konon of Gradara start digging ridges in the garden.”