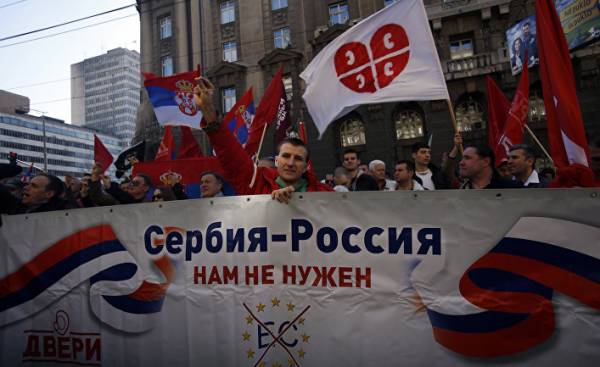 BRUSSELS — In a moment the wind picked up a leaflet with the text of the speech Federica Mogherini and snatched it from her hands. The foreign policy head of the EU stood Sunday on a bridge in Mitrovica in Northern Kosovo, and pronounce the closing speech after visiting the six Balkan countries. And just when she was close to a paragraph about what appears to be the future of the wind for a while deprived of its records.

“A piece of paper flew out. But the thoughts on paper will not disappear. They take form and become reality. And it changes people’s lives for the better,” she said and cited the example of a bridge on which he stood.

“This bridge which we repaired, transformed from a symbol of division into a symbol of dialogue and contacts between people. The power of the European Union is that we create a dialogue, peace and understanding in places dominated by confrontation and problems”.

The bridge in Mitrovica is a symbolic place in the story of riven in the 1990s, the years of the wars of the Balkans. He marked the separation of the Serbian and Kosovo-Albanian parts of Mitrovica residents. During the war, so after it he was the center of violent clashes that led to casualties on both sides. Danish soldiers participated in the protection of the bridge.

Today on the big boards on the bridge says “EU”, it is a sign that new times had come.

Construction project that turned the bridge into a pedestrian zone, and a solemn speech about dreams that become reality is one thing. But the brute reality is something quite different. And plans by the EU to ensure a peaceful Balkans the path to the European community in the last year substantially diminished.

Mogherini said this very directly, when he returned to Brussels on Monday evening. Of course, she spoke about the progress that has taken place. However, it was pretty grim.

“The region is exposed to different kind of challenges, the situation is tense. This also applies to the internal situation in the countries and relations between ethnic groups within countries. This is extremely dangerous because it can ignore the region for years ago. Peace in the Balkans should never be perceived as something given once and for all,” said Federica Mogherini.

“I saw a region exposed to global tensions. The Balkans can quickly turn into one of those chess boards, where is played a big fight for power,” she added.

Omission on the part of the EU

The last remark applies in particular to the growing Russian influence and presence in the region. According to Joerg Forbrig (Joerg Forbrig), program Manager for Central and Eastern Europe at a think tank German Marshall Fund, this is due to the fact that the EU interest towards the region lost some momentum.

“The problem is the lack of attention from the EU. The EU nearly a decade was focused on its own internal problems. The Euro crisis, immigration crisis, a failed attempt to reorganize the EU, undertaken under the Lisbon — all this meant little attention to such regions as the Balkans and Ukraine. Now we see the result. This has led to a situation where water is slowly but surely approaching the boiling point,” says Forbrig and continues:

“Where the interest of Europe is weakened, it comes to Russia. The best example is Syria. On the one hand, Balkan countries have the prospect of membership. On the other hand, the European Commission President made clear that accession is unlikely to happen during his presidency. This suggests that the interest in the Balkans weakened. And that’s a signal to Moscow that they need to become more active,” — said Joerg Forbrig.

In Montenegro, the state Prosecutor has accused Russia that it is involved in attempt of mutiny in connection with the parliamentary elections in the country in October. Tensions rising in Macedonia. The country plunged into a constitutional crisis because the President does not want to give the social democratic party the authority to create a government. The fact that the party entered into an agreement with the party of the ethnic Albanians, requiring wider use of the Albanian language.

The forced conflict between Serbia and Kosovo. In January was supposed to mark the restoration of a direct rail link between the two countries, but when the train left Belgrade, on it were written the words “Kosovo is Serbia”. And it threw wood on the fire the previous tension.

Code Mogherini during his tour last week visited the Serbian Parliament, it was met with placards with words of protest and loud cries of protest — members of the nationalist party for a total of 20 minutes, trying to outvoice the representative of the EC, standing on the podium.

“Serbia! Russia! EU we do not need” — such cries, if you believe the reports of mass media representatives, who were in the meeting.

However, Mogherini stressed that the parties need each other.

“Our Union is not complete until Serbia and the Western Balkans are not part of our family. This country and this region are located in the heart of Europe,” she said.

The heads of States and governments of EU countries are not as welcome as at home they have their own problems: nationalism and resistance to European cooperation. Started a debate on how the EU in the future must expand, shrink or evolve with different speeds. And very few want to come to grips with the question of enlargement of the Alliance by one or several Balkan countries.

During the summit on Thursday, Mogherini held a briefing on the situation in the Balkans for the 28 heads of state and government. Before the meeting, Prime Minister Lars løkke Rasmussen reminded about the sad past of the Balkans.

“I’m old enough to remember well the war in Yugoslavia, the genocide that we have seen in this part of Europe. And if different countries have spark, we have to take it seriously. Seriously we should relate to Russia’s interest,” said løkke.

“It is clear that Europe is being forced to take part in it, both political and moral. We have slightly reduced our foreign service in this part of Europe. In the world then all was well. We also have again a lot to weigh. It is important that we, the political leaders of Europe, we begin to turn our gaze in the wrong direction, and it is important to talk with the leaders to prevent conflict, rather than waiting for it all to explode in our hands,” said løkke.