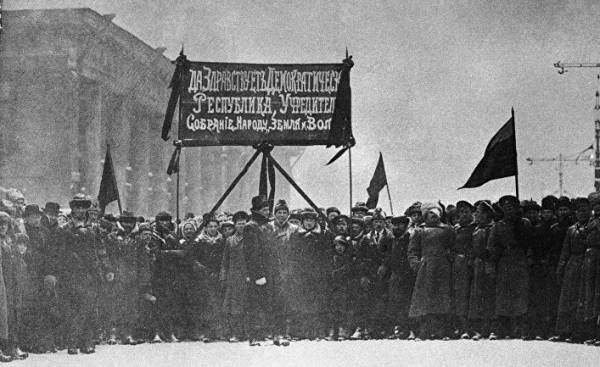 Russian people through trusted leaders of the State Duma and the circle of enlightened, dedicated people abroad, took over the leadership of the Empire. That is the goal and the achievement of the Petrograd uprising. Compliant the king abdicates and the crown, shadow of the Imperial power falls on the crown Prince, and Michael, stronger in character than his brother, is the Regent. The actual government is in the Duma. If the Germans hope that this revolution would be to their advantage that she will lead Russia “from the war”, they are deeply mistaken and do one of his typical blunders. On the contrary, if all goes well, the revolution force of the great Russian Empire to fight against Germany even more determined and better equipped troops that will be exempt from treasonous conspiracies and to find support of the Russian people.

Revolution, of course, directed against the government, because, as we know, Ministers removed from power and imprisoned under arrest, but this revolution was not only against the king or government, as against the “dark forces” — Pro-German traitors and conspirators who have long dominated the government and distort the meaning of Russia’s military policy, undertaking a number of successful and well-calculated steps. They have Germany immeasurable service in such a large scale reducing the combat capability of its most serious enemy in the East. The German conspiracy in Russia acquires a comprehensive character and is more dangerous than in any other country. Throughout Russia, especially in big cities, most obviously at court and in the Petrograd and Moscow society, people to a greater or lesser extent, of German descent, a brilliant representative of whom is the disgraced Sturmer, scheming or openly control the politics of the Empire by direct intervention in the plans of the generals. They undermine the military power of the country, to ensure that military equipment and other necessary supplies had not reached those who fight at the front, the influence of the king, to drown out the voice of the people and to hinder the will of those who represent members of the Duma, and due listed the obvious evidence of infidelity they cause the allies great concern.

Provisional Committee of the State Duma, at the moment he took matters of government into their own hands, will put an end to the domination of these “dark forces”, if the revolution will continue in the same direction in which started. For people Interim Committee of the standing Russian people, no question about it; apparently, they enjoy the support of the army, and the army, of course, is everything. Revolution during the war, when under the command of the government is a huge army, usually not conceivable. Today in Russia is an exception: it is safe to say that we are talking about the army of other storage. A large part of the well-trained soldier of the regular forces, raised in the tradition of the loyalty oath and unquestioning execution of orders, disappeared in the first two and a half years of war. New soldiers come into operation from the people. There are particular reasons to believe that they share the sentiments of ordinary Russian people, and this should be taken into account if we want to understand the internal conditions in Russia.

Early in the war the heads of the Zemstvos (assemblies in motion) and the governors proposed to the government its assistance to concentrate the forces and means of the industry of the whole country and to supply the army with food. Largely under the influence of innumerable crowd of bribes, which were fed on government contracts, the proposal was rejected. The government itself tried to supply the army, but because of their inept actions and the relentless sabotage of takers these attempts failed, logistical services could not cope with their tasks. At the recent Moscow meeting of the heads of district councils and mayors to come up with concrete plan of action, they were ready and had the appropriate capabilities, and finally the government has accepted their help. It was priceless. Every mayor, every head of the Zemstvo knew what might help his city or province, it was capable entrepreneurs, they were able to succeed. For example, give the order to manufacture a million pairs of shoes for the army. District councils produce them before in Petrograd will deal with all bureaucratic formalities. Food riots were the result of incompetence of the government, its inability to distribute food, the work of the Zemstvo organizations also are willing to take. The soldiers know that their boots and shoes, their shape, and warm clothing, their food and other supplies come from the people, not the bureaucrats. Inevitably the mood of the soldiers, their attitude to the revolution is greatly influenced by this knowledge.

Besides, the fact that came together millions of people from across the vast Empire, which interact with each other come from the common people has for the future of Russia is extremely important. This can be compared to Louis XVI convocation of the States General, when the first General Council was able to gather representatives of the French people. This was followed by a revolution. In France, there are Russian soldiers and there, they sing “La Marseillaise” instead of “God save the Tsar”, where they associate with soldiers of the French Republic, a warm friendly relationship. New ideas are harmful to mossy autocracy, they in abundance are in the minds of Russian soldiers. A message indicating that the leading officers at the front assured the Duma Committee in its support, that sounds fully believable.

The immediate success of the revolutionary movement, if he really will be successful, will become apparent through the combined forces of the Empire for a decisive war. Only through the victory of Russia will be able to award the coveted access to warm seas. “Dark forces” to be neutralized, bloodsuckers who profit from war need to stand back, traitors, helping Germany face immediate reprisal. There is no point to dwell on the long-term consequences, but they show through quite clearly. When events in Russia take such a turn that the Duma openly disregards the king’s decree of dissolution, arrest of Ministers, undertakes the functions of government, and the army as I believe today, sympathetic to this movement, it is hardly possible that after the war “Russian state institutions” can resist the force of change. And, perhaps, perfectly knowledgeable and influential statesman Pavel Milyukov, leader of the Constitutional democratic party, will live to realize his dream of a constitutional monarchy in Russia.

The article was published in the newspaper the New York Times, March 17, 1917. 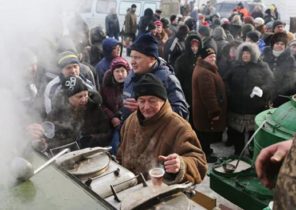