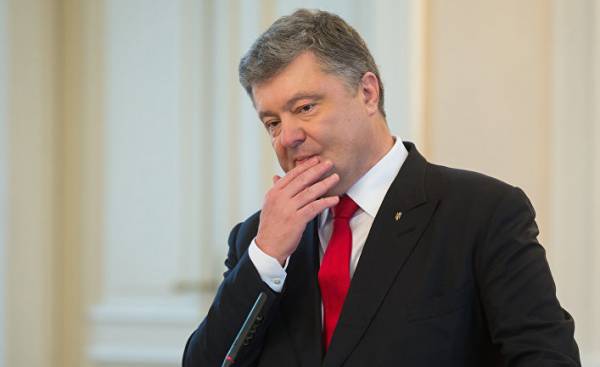 Everyone was waiting for the visit of Petro Poroshenko in the United States and his meeting with the new President of the United States Donald trump. Such a hope is pleasing because the Senate would have to take place before the scheduled meeting trump with Putin. However, went to the States the Minister of foreign Affairs Pavlo Klimkin, who spoke with U.S. Secretary of state Rex Tillerson and a member of the Senate Committee on foreign Affairs and the Ukrainian Caucus of the Senate, Marco Rubio. All meetings were accompanied by statements of the American side of full support of Ukraine, about the necessity of further sanctions against Russia and to strengthen them. The nature of pattern in the statements of reminded me of the time Obama. Why is Poroshenko States flew Klimkin and talking about a standard application of the American men, says the expert of the International centre for policy studies, Yevgeny Yaroshenko.

Before Pavel Klimkin was the minimum objective: to understand the opportunities for the Ukrainian side in relations with the United States after the arrival of the trump. And the maximum objective — to prepare the ground for the visit of Poroshenko. How successful was this visit, Klimkin is now very hard to say. Will there be any special achievements from this meeting for relations between the two countries, we will see in 1-3 months. Now the official rhetoric really looks very optimistic. And in fact, something new we have not heard, because it sounded the same statements that the sanctions will continue until you complete the Minsk agreement, the United States will support Ukraine. This is evidence that the United States still has not developed its position regarding Ukraine and Russia, they continue the course laid down under President Obama. But how long will this continue — the question is very relevant.

It is not excluded that the US is now waiting for concrete proposals from Russia and from Ukraine. In order to increase the chance to obtain concrete support, Ukraine needs to make specific proposals that would be interested in the United States more than the Kremlin. So far, the Ukrainian side has not moved one iota in terms of attracting interest from the United States. Ukraine is not showing any innovative approach. We try to keep the old stamps with them to build future relationships, but it is not productive, because eventually these stamps are subject to devaluation and no longer be perceived. All the West has tired of the constant rhetoric of Ukraine. We are expected some concrete proposals and not calls for extension of sanctions and support to Ukraine. We must show that we are ready to go, to show that Ukraine is the subject and is able to provide for themselves using their own resources, and does not expect to be a recipient of any help.

The Ukrainian side very much counting on Poroshenko’s visit — is the truth. But is Poroshenko went Klimkin, the level of contact was much lower and, as a consequence, the importance of negotiations was also low.

The visit of the Ukrainian President in the US was postponed due to some changes that have occurred in the administration of the trump. In February, the adviser to trump rather important figure that influences the foreign policy of States — Michael Flynn, resigned. The search for new candidates and approval processes has diverted the United States from international Affairs and was forced to focus on their domestic issues.

It is necessary to consider another factor: the trump for a month and a half of his presidency has done a lot of resonant steps is antiimmigration and decrees, and position relative to the free trade zone. He is under severe pressure from Republicans and Democrats, by society. And his meeting with Poroshenko, respectively, is not even a secondary priority. For the American side in this situation objective because they do not consider relations with Ukraine as a separate line. So it was in the age of Obama. If during the Clinton and Bush Ukraine was quite an important partner, now pay attention to the leader of the non-priority countries, when in the middle of trump raises a lot of controversy, from a political point of view not very useful.

At the same time, delayed and trump meeting with Putin. And the reason is similar: administration trump is still developing its strategy in relation to Russia — it will be a partner, an adversary of the US or simply the country with which it is possible to develop a certain relationship.

The USA withdrew from these external issues indefinitely. The electorate that chose the trump, is expecting his greater attention to external issues. But trump is still in the process of forming the external doctrine. And while a common vision is missing in the White house, trying to come to foreign Affairs very carefully. Even if you compare the statements of trump and his entourage to the inauguration with those who are, the degree of severity is much less.

The United States wants the Ukrainian crisis doing European allies. Because Ukraine is Europe, and to take care of European security needs of Germany and France, not the States, who are far more interested in the situation in the Asia-Pacific region. The US wants this conflict to shift onto the shoulders of the EU and Angela Merkel.