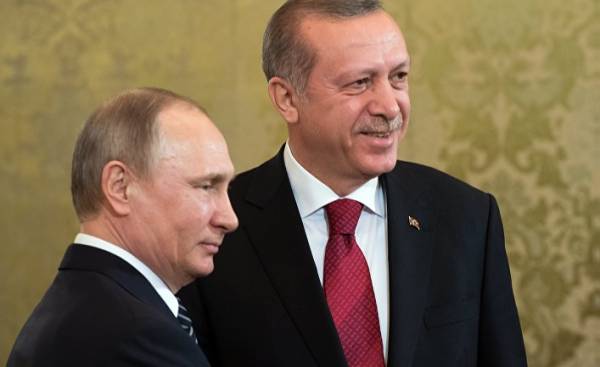 Turkish President Recep Tayyip Erdogan went to Moscow, this Friday it takes President Vladimir Putin. In August, Erdogan visited St. Petersburg; in October, Putin and Erdogan met in Istanbul and signed an agreement temporarily frozen gas project “Turkish stream.” In addition, in Turkey with the help of Russian technology to be built nuclear power station called Akkuyu. In November, Ankara has announced its intention to buy Russian air defense system s-400. Although the sale of the flagship of the Russian air defense NATO country is surprising, but apparently, Turkish-Russian relations are improving.

After November 2015, the Turkish air force shot down a Russian fighter jet near the Syrian-Turkish border, there were fears of a military escalation between the two countries. At the same time, Moscow has deployed air defense system s-400 on its air force base near Latakia, which was supposed to serve as a specific signal to Ankara: any enemy combat aircraft, which will appear in the skies over Syria, will be shot down. Moscow politicians criticized Turkey and Erdogan did not stop even in front of the President’s family, saying that she allegedly earns in the oil business with a terrorist group “Islamic state” (IG). Dozens of Turks were deported from Russia.

But thanks to the absolute flexibility of Moscow’s campaign ended in late June of last year: they pointed out a letter of apology to Erdogan. Suddenly Turkey of an “accomplice of terrorists”, as previously stated, Putin again became a victim of ISIS (a terrorist organization banned in Russia — ed.). Also again increased the interest Erdogan in Moscow. He became disillusioned with the West and is now looking for a reliable partner — and, obviously, found it in Moscow. There is no need to fear criticism of the planned reform of the Turkish Constitution, unlike Germany. Putin and Erdogan seem to have come to a pragmatic conclusion that together they are better able to realize their political and economic interests.

But the questions remain. Russian tourists return to the Turkish beaches. But Russian sanctions on Turkish products are still in force, despite lengthy negotiations about the cancellation. And Turks still have to apply for a visa for entry to Russia; such a penalty measure was introduced after was shot down by a fighter. During the negotiations we will talk about these issues, and on cooperation in the energy field.

Another issue is Syria; Erdogan arrived in Moscow with the Minister of defence of Turkey. Together with Iran, Russia and Turkey act as “guarantors” of the so-called process in Astana, initiated in January. The “moderate” rebels under the auspices of Ankara should hold talks with the Syrian regime, supported by Moscow and Tehran, but so far held only indirect talks.

Current from the end of December, the ceasefire is quite fragile. Moscow has recently acted as a mediator between Turkish armed forces and rebels on the one hand, and regime forces on the other, there was a competition for the re-capture of the Syrian city of al-Bab and the IG. After capturing El-Baba, Ankara has identified its next target Kurdish-controlled city of Manbij, located in fifty kilometers to the East. The Kurds are supported by Washington, which, according to the Advisor of Erdogan, has 500 of its own soldiers on the ground, the Kurds are also important allies in the fight against ISIS.

The bombardment of the Turkish positions

Moscow also maintains relations with the sworn enemies of Erdogan and insisted on their participation in the negotiations in Geneva. For Putin, the Kurds are playing an important role on the ground as a counterweight to Iran, which also raises the tension. Given the threat of a collision in Manbij, Moscow offered to divide Kurdish and Turkish units, to give part of the territory West of the Euphrates river, for example, Manbij, the forces of the regime, thus creating a buffer zone. According to the General staff of Russia, this process began on 3 March.

Ankara stated that it is better if Manbij will control the forces of the regime and not the Kurds. The Kurds, in turn, said that the city was passed in the interests of the civilian population, to protect him from the “Turkish aggression and occupation.” To reduce stress, the chiefs of staff of the United States, Russia and Turkey met on Tuesday in the Turkish Mediterranean city of Antalya. Areas such as Manbij, has become a “crowded field”, and the proximity of different forces creates a “dangerous situation” that requires coordination, said the Department of defense.

In the conversation between Putin and Erdogan a role is likely to play the following incident: when the 9 of February in Ankara was the new head of the CIA Mike Pompeo, the Russian air force bombed Turkish positions near El-Baba. Three soldiers were killed, eleven were injured. The Kremlin accused in the incident “our Turkish partners” that provided the coordinates and the target was the terrorists. Ankara has rejected this, stating that ten days before, and the night before, the Russians reported that there are Turkish positions.

This incident caused speculation about a deliberate demonstration of partner power of Moscow. However, Ankara has refrained from formal charges, as well as in December, after the assassination of the Russian Ambassador in the Turkish capital, Moscow has demonstrated a desire not to endanger the restored pragmatism in relations between the two countries.