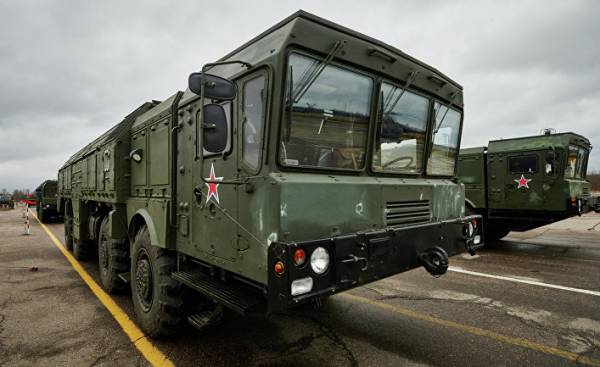 Last month The New York Times reported that Russia has secretly deployed two divisions of winged land-based missiles, in violation of the Treaty on the elimination of intermediate-range and shorter-range nuclear forces (INF). In the Wake of these revelations a lot of writing and talking about the future of the INF and how the US should respond to Russian violations of military and diplomatic means.

We have to understand that Moscow will continue to violate the INF Treaty, and it is therefore important to find out the root causes of her behavior. Russian President Vladimir Putin has decided to ignore the Treaty because of the growing military power of China, but also because the Russian military doctrine. In addition, the breach of contract is helping Putin achieve his long-term goal of weakening NATO.

Signed in 1987 between the US and the USSR Treaty on the elimination of intermediate-range and shorter-range imposes a ban on land-based missiles with a launch range of 500 to 5,500 kilometers. But in recent years, Russia makes it clear that it considers the Treaty unfair. The main argument of Moscow is that in the contract there are flaws, as it was signed by only the US and Russia, and therefore, other strategic rivals of Moscow, namely China, is not restricted by the provisions of the INF Treaty on missile technology. Meanwhile, China invested heavily in the development of medium-range missiles.

Russia believes that the Chinese missile divisions, which threaten the American bases in East Asia, can easily be used against targets in the East of Russia. Relations between Moscow and Beijing today is better than between Moscow and Washington, however, in the recent history of Russian-Chinese relations there were many long and bloody conflicts. These neighbors only in 2005 allowed their boundary dispute in the Amur region, which during the cold war claimed hundreds of lives.

Further, analysis of Russian military doctrine indicates that military command considers cruise missiles, a vital weapon of modern warfare. Accordingly, Moscow seeks to create asymmetric nuclear facilities. The cruise and land-based missiles are difficult to track, they can be equipped with nuclear warheads, and they overcome Western missile. Russia has studied the successful American experience of the use of such missiles in Iraq, Afghanistan and Kosovo, and aims to repeat this success.

Russian intervention in Syria gave Russia test testing ground for cruise missiles, and the results confirmed their high efficiency. An expert on arms control Jeffrey Lewis (Jeffrey Lewis) noted that the Russian cruise missiles, sea-based, dealt in 2015, the strikes on targets in Syria, very similar to the new cruise land-based missiles, in violation of the INF Treaty. These attacks were made in order to demonstrate the end of American monopoly on cruise missiles, as well as Russia’s ability to defeat targets from a distance in order to avoid losses. In future conflicts, Moscow will focus on the new cruise missiles, given the difficult and chaotic situation in the middle East. In addition, in the post-Soviet States, especially those with large Muslim populations, there is a growing dissatisfaction with Moscow, so such missiles can be used in Central Asia. In the future, cruise missiles, land-based able to become a key means of waging limited war.

The deployment of a new Russian cruise missiles in the European theater of operations leads to increased political divisions within NATO. The Kremlin understands that the threat of use of nuclear weapons imposes on European leaders greater domestic burden. Putin has calculated that the risk of nuclear Armageddon will force NATO to abandon military countermeasures which, in the opinion of the Alliance, to provoke Russia, and it will seriously weaken the Western military Alliance. Russia likely to join aggressive nuclear posturing with propaganda efforts, taking advantage of the political tensions within NATO and will strengthen the view that confrontation with Moscow will lead to a nuclear Holocaust. If Russia will deploy such weapons within range of NATO bases in Europe, this will change the nuclear balance between it and NATO, will undermine the concept of a guaranteed second strike and complicate the actions of Western leaders to prevent the escalation.

Russia is signaling that it is ready to the new militarization of Europe. In the case of a military crisis, Moscow could use nuclear weapons as a trump card in bargaining with NATO, and forced the Alliance to abandon counter Russian aggression. Most notably, Germany is opposed to this militarization and insists on the elimination of nuclear weapons on the continent. It is hard to imagine that the German government will support the strengthening of nuclear capacity in Central Europe, the increasing nuclear Arsenal of NATO and the deployment of nuclear weapons in Eastern Europe in response to Russian aggression.

Thinking about the long term, Putin probably figured out that the weakening of the deterrent force of NATO will benefit most from that entirely reimburse possible damage caused by violation of the INF Treaty. Developing response, American political leaders need to understand what is guided by Moscow, creating and deploying such missiles. The main reasons for this is the growing military power of China, Putin’s desire to exploit political differences within NATO and Russian military doctrine. We must therefore develop a policy which will weaken the incentives pushing Moscow to a violation of the INF Treaty.