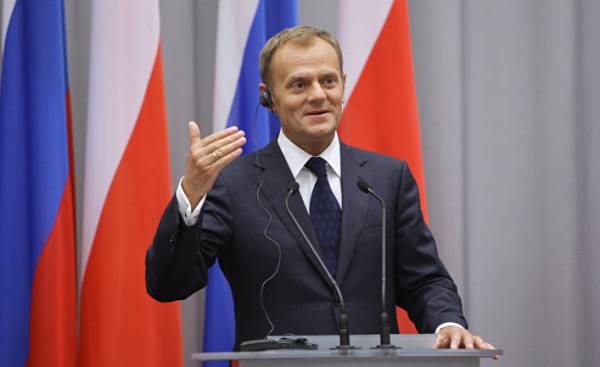 Whether Donald Tusk to remain in office of the Chairman of the Council of Europe on the results of voting, received a majority of votes? Opposed to his own country.

This Thursday will be a meeting of the Council of Europe, after which the heads of States and governments of EU countries will be very, very busy. It is becoming increasingly clear motto: “Together we stand, divided we fall”, which was proclaimed in late January, the President of the European Council Donald Tusk in his letter. The upcoming summit will be dedicated to him: Tusk, calling for unity to be re-elected.

The Council of Europe pursuant to article 15 of the EU Treaty, “the Union gives the impulses necessary for development and defines the General orientations and priorities. However, he is not involved in legislative activity.” Its Chairman, said later, “is engaged in training and consistent leadership for the Council of Europe and ensures the cooperation and search for consensus in the Council.”

But is it possible still to speak about consistency, unity and consensus with respect to the Union? These words sound as if from other times. Tusk’s re-election (or choice of someone else) is unlikely to give a clear picture about the current state of the Union. For election do not need a unanimous vote — enough for a qualified majority when the voters represent 55% of member States and 65% of the EU population.

Then a candidate will be elected for a term of two and a half years (longer than two terms post to take impossible). Tusk’s chances to succeed is good, and it would be great if literally in the last days not there is a problem — and not somewhere, and in Poland.

Of course, the reason is internal political discord. The head of the national conservative ruling party Jaroslaw Kaczynski (jarosław Kaczynski) who knows how to praise Angela Merkel as “the best option for Poland” and then to curse his countryman Tusk for closeness to Merkel, is a main factor of this parochial war that broke out now in Poland.

What made this Tusk? By the way, his name in English means “elephant Tusk”. When Tusk in December 2014 took office, half of the European crises for “boil”: Greece “hung in the balance,” and the Russian soldiers without insignia — fought in the Ukraine. The flow of refugees from the South, Pexit and victory trump was yet to come.

If re-elected Tusk will have to face two crucial moments of the elections in the Netherlands and in France. Germany, I dare to suggest, yet still remains a kind of bulwark of “order, coherence and consensus”, however, and in the fall there will be elections to the Bundestag.

When Tusk was the “head of Europe” and moved to Brussels, it seemed like a breath of fresh air, which had begun with high hopes: after all, for the first time this position was held by a representative of Eastern Europe, and very successful in her previous job. Before he was for seven years — longer than anyone else since 1989 — served his country in the role of Prime Minister.

The times, which the EU is not too successful and even crisis, for Poland, of course, was not “fat”, but it was definitely stable, they were accompanied by economic growth. Thus the country was the only growing economy in the entire EU, so that Tusk rightfully could call their country the “green island of Europe”.

In Brussels, his business took off immediately. At first, he was accused of lack of diligence and was criticized for not too good English (by the way, being a native of Gdansk, Tusk good speaking and German).

His predecessor in the post of Herman van Rompuy (Herman Van Rompuy) was set as a model rather understated role, he focusing (perhaps too) on consensus, consensus and more consensus. However, where it is now — let’s use historically overshadowed by the word “leadership”?

It would take a certain amount of time, and only then Tusk decided to get rid of hanging over him the shadow of their predecessor and say, “I appreciate it very much, but I never wanted to be his copy.” He added: “I’m not a diplomat”. According to him, he wanted to act “openly” and be reliable and honest partner to governments of member countries of the EU.

Since then, he could boast some of its own successes. In the summer of 2015, he acted as a mediator in the talks between Angela Merkel and Greek Prime Minister Alexis Tsipras (Alexis Tsipras) and saved the summit on the settlement of the Greek problem. In addition, in their asset it can record the unity of the EU against the Russian-Ukrainian conflict and sanctions against Putin.

Even in 2015, Tusk said that the EU’s future will be decided on its Eastern and southern borders. Perhaps this sense of danger on the edge of Europe he developed as a student: because it is a master thesis of the story was devoted to Marshal józef piłsudski (Józef Piłsudski), which in 1920 was a “Miracle on the Vistula”, when his forces prevented the red Army to conquer Poland and then Germany.

In connection with the migration crisis Tusk immediately put the accents differently than his political ally Angela Merkel. He always insisted on strengthening the EU external borders as a prerequisite for any reasonable migration policy.

Time showed that he was right. However, the tandem of “Tusk — Merkel” a few suffered from it, and “supposedly they have been unable to restore their friendly relationship as they were before the fall of 2015,” wrote recently, the Polish Gazeta Wyborcza.

Something Tusk has been achieved on the eve of a referendum on the subject of Brexia, during talks with British Prime Minister Cameron (although that ultimately failed to convince their countrymen to vote against the country’s withdrawal from the EU). Later he succeeded in making the free trade agreements CETA, when none other than Belgium at the last moment refused to vote in favour.

The defender of the good traditions, not afraid of quarrels

And then came the tramp. America, wrote Tusk in the previously mentioned letter, “seem willing to question its foreign policy for the last 70 years.” No, to be in the “skin” of the Chairman of the Council of Europe, in his words, is not desirable. Because it should be “elephant skin”.

On Wednesday, the Polish government once again accused Tusk of “flagrant violation” of neutrality, which it needs to comply with in his post. The fact that in December, when in Warsaw, thousands of people gathered to protest the building of the Polish Parliament, Tusk urged the government “to respect the people and the principles enshrined in the Constitution, values, rules of games and good tradition.” Bad, very bad!

Can a person acting as a champion of good traditions and at the same time not afraid of quarrels, to be President of the EU? Or it is necessary to achieve “consensus” at any cost? This question today has faded into the background.