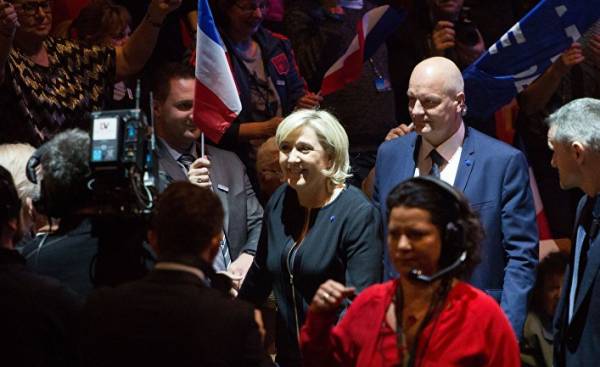 France has 30 million users of the social network Facebook, some of which are active and others are not very reactive in their posts and “likes” on the political life of the country. Therefore, the Agency Reputation Squad has decided to calculate the popularity of each of the candidates in this social network.

The calculation was carried out from August 2016 to March 2017. During this time the French had “like” more than 9 million times a publication of the presidential candidates. The head of the extreme right “National front” marine Le Pen scored the highest number of “likes” — 485 thousand. In the second place candidate is extremely left-wing movement “Rebellious France,” Jean-Luc Mélenchon, 431 thousand “likes”. Far behind other presidential candidates: françois Fillon from the party “the Republicans” (227 thousand), Emmanuel macron from the movement “Forward” (180 thousand) and Benoit Amon from the ruling party of socialists only 116 thousand from the candidate.

According to sociologists, fans of marine Le Pen and Jean-Luc Mélenchon is not only the most active but also the most loyal: they almost never “likes” the posts of other candidates. Unlike fans of the candidate-the socialist Amon and the center-left of Macron, every sixth of them at least once said their approval of posts is extremely left candidate Jean-Luc Mélenchon. The last electorate allows itself to endorse only statements marine Le Pen, and even then, 50 times less, than the electorate of other candidates.

In addition to the preference of French users of social networks, sociologists were able to identify their favorite information sources. They analyzed about 2.2 million links to Facebook articles about the candidates, published in the French media.

And received that fans of Emmanuel Macron is often read economic press (Les Echos and La Tribune) and the most popular daily newspaper Le Monde. Supporters of Francois Fillon prefer a newspaper with right-leaning Le Figaro and Catholic La Croix Herald. For fans of the left wing candidates of Mélenchon and Amon the most popular media are, of course, left-wing newspaper Libération, Médiapart, log L Obs and the Communist L’humanité. The non-traditional readers have been fans of marine Le Pen, who prefer “alternative” sources of information: far-right websites racist tendencies Fdesouche and Boulevard Voltaire and… authorities of the Russian propaganda Sputnik News and Russia Today.

Publishing the results of its study, the Agency Reputation Squad recalls that the statuses in Facebook open and all data can be freely used.