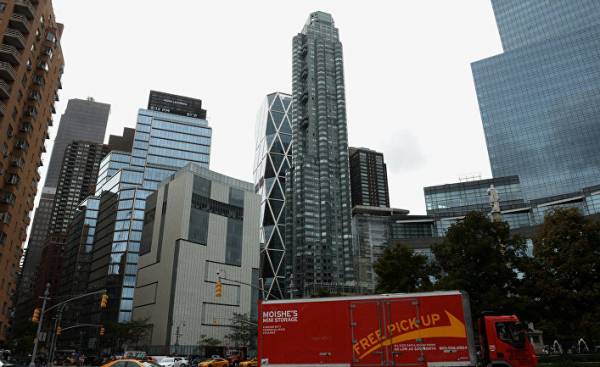 According to statistics, survives only half of the people that have fallen from the third floor. Almost no one remains alive after falling from the 10th floor. However live in America window washer, in 2007 had fallen from the roof of the 47-story new York skyscraper.

“I loved qualitatively to wash the window, says alseides Moreno. — I liked to work with water, soap, wield a scraper for washing Windows”.

“We started from the top of the building, and gradually went down, floor by floor. I loved it,” he recalls.

7 Dec 2007 Moreno and his younger brother Edgar had to wash Windows a 47-story skyscraper “Solow tower” in the Upper East side.

They took the Elevator to the top floor and out the roof. It was cold outside, the temperature outside was near zero.

The tragedy occurred almost immediately. When they climbed into the five-meter construction the cradle, the cables on which it is held, according to a report by the U.S. Department of labor, “slid off the mounting points on the roof.”

“The first snapped cable on the left side. There stood my brother. My brother fell out and floated to the bottom,” says alseides Moreno.

Edgar flew 144 meters and down a narrow alley. By the time when he floated to the ground, the falling speed reached about 190 kilometers per hour.

Shortly thereafter jumped cable from Alcaidesa and he too flew down.

Soon to a scene there arrived firefighters and paramedics. Before them appeared a horrifying scene. Edgar Moreno landed on a wooden fence that cut it in half, and help him was impossible.

Alcaidesa found in the middle of warped metal parts of the cradle. He was in a bent position and held tight to the remote control cradles. However, he was breathing, and as eyewitnesses speak, even tried to get to his feet, but he failed.

The firemen say that they are extremely carefully, “like a fragile egg”, brought him to the ambulance, knowing that any sudden movement might cause his death.

Belt fitter-altitude, safety ropes, soap and a bucket of hot water was found on the roof.

Alcaidesa Moreno was rushed to a nearby hospital, where he was put into a coma. He had trauma to the brain, spine, chest and abdomen, as well as broken ribs, arm and both legs.

He survived multiple surgeries, he poured 12 liters of blood.

“If you want to hear about the medical miracle, this is it,” he said at a press conference Dr. Herbert Pardes, new York Presbyterian hospital.

“The percentage of survivors among those who fell even from the fourth floor, not great,” said Dr. Glenn Asaeda of the fire Department of new York. — Then stepped on the hand of God.”

Alseides Moreno came out of the coma nearly three weeks later, on Christmas day. Next to the hospital bed sat his wife Rosario.

He doesn’t remember falling. Did he know what happened with your brother?

“I realized that he must have died because I looked around and saw that the room only me and my wife,” he says.

The investigation found that the platform on the roof is not maintained in proper condition and that the cables of the basket was incorrectly attached to the roof.

Investigators also found that although alseides Moreno and climbed into a construction cradle, not wearing a safety harness, this does not mean that he was not going to use them. They decided that, as it left the water and soap on the roof, he was going to go back, and buckle up.

Still not clear how he managed to survive. Because he held firmly to the cradle falling, and that took the brunt? Maybe some time the cradle as something is planned in the air? Maybe it struck the wall of a skyscraper, and this, in turn, slowed the rate of fall?

Both brothers came to the U.S. from Ecuador in the 1990-ies in search of work.

“It’s been very hard losing him,” says alseides Moreno about his brother.

“Edgar lived with me in new Jersey, we had a lot in common. He worked with me and died working with me.”

“I was depressed for about three years. So much time is needed to I have accepted the fact of his death. As if I lost the baby, he was younger than me.”

Alseides Moreno received a large compensation, and moved with his family to Arizona. According to him, the warm weather is good for his bones.

“My body is covered in scars, but because of a back injury I can’t run, only walk, he says. — I’m not the one that was before. But I thank the Lord for being able to walk. It’s just amazing.”

Moreno is now 46 years. He says, that with pleasure once again would wash the Windows of skyscrapers, because no matter what, not afraid of heights. But he can’t take this job for health reasons.

“When I about something asked, I often don’t finish the sentence, he says. — There are things that I do just bad. The consequences of the accident”.

What happened on 7 December 2007, has changed and other aspects of its life.

“I used to think only about themselves, says Moreno. — I have been the breadwinner, and thought that was enough. Then I realized how important my wife and children.”

Last year he gave birth to the fourth child. And he just shines with happiness when talking about his eight-month-old son.

“I keep asking myself: why did I survive? I have a new baby — perhaps I survived to raise him and to tell him what happened to me,” says the alseides.