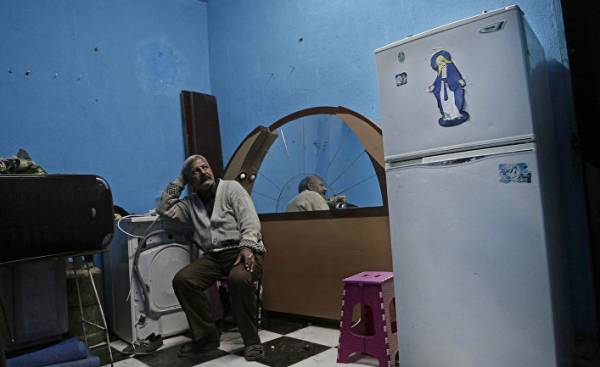 Since the beginning of January in Northern Sinai jihadists of the local representation of the “Islamic state” (banned in Russia as a terrorist organization — approx.ed.) arrange all new atrocities against Egyptian Christians. Every day dozens of families seeking refuge in Ismailia, where they are admitted by the Church.

She sits on the chair with the still-sealed plastic back. Her gray hair carefully tucked under a black scarf. On the shoulders — long woolen shawl, also black. Magda reached Ismailia after a long journey. She was tired, but kept straight. Her eyes scattered, because mentally she’s still in her native El-Arish, capital of North Sinai, where she left after the tragedy.

“I am the mother of a Martyr Wael. My son had a small shop in the city centre. His wife and I, we worked with him. Last week I went to the store three masked men. They shot him dead. One bullet hit the heart, the other in the side, and the third in the cross, which he had tattooed on his arm as most of the Copts. Then they threw on the floor his pregnant wife, took a bottle and a bag of chips and quietly left,” she says slowly, weighing every word.

Magda stops suddenly, and her face tears start to flow. Then she continues: “My son… He brought me medicine and food. I lived because of him. Now no one else to take care of me, no one to support me.” Sitting next to her brother Medhat still can’t get over it: “They killed my cousin’s boy and continued to kill Christians one by one. We felt that soon will come our turn. So we Packed up and left.” This man with a narrow beard nervously rubbing his hands. His shoulders lowered, and he with tenderness looks at his sister. In El-Arish he was a teacher.

In addition to them? even more than 145 families of the Copts over the past few days came to seek refuge in the Church of Ismailia, which is on the other side of the Suez canal, approximately 100 kilometres North-East of Cairo. They run from persecution of the group “Province of Sinai”, the local representation of the “Islamic state”, which urged its supporters to directly hit the Christians. Jihadists operating in the North Sinai since 2011 and was sworn in by ISIS in 2014. A list of their crimes is already very large: dozens of attacks against local security forces and several bombings in Cairo, including the Consulate of Italy in July 2015 and the Coptic Church in December of last year (29 dead).

After the rise of aggression at the end of January in Ismailia gradually new families arrive by taxi, bus or car. Every day there are a few dozen. All of them weary. The path from El-Arish Ismailia in not too long (about 200 kilometers), but it is literally littered with military barriers, which means a long wait and anxiety. “We spent almost the whole day, not knowing if we can get here,” says the old man. He sits at the table and eagerly pounced on the food brought: he had not eaten in two days. Beside him sleeping girl leaning against mother. The woman lulls baby. They are finally safe.

Nabil is doing what it can to accommodate these families. “We have enough food for those already here: oil, lentils, beans, canned goods, tea, sugar. About two days left. But this is not enough for those who still come,” he says, running between the kitchen and provided the newcomers rooms. Nabil — deacon. Everywhere he goes, armed with a pen, calms people (“Thank God you’re here, alive and healthy”), finds toys for children who are bored in a large yard. “We first take them here, provide them food and shelter for the night, and then we register them together with the authorities put them in accommodation centres,” he explains, handing the form to the man who wants to register.

Nearby, authorities requisitioned the youth center for dozens of families are talking in the shade overlooking the Suez canal garden. Adil Shukri sitting under a tree. This French teacher from El-Arish came up for the weekend with his wife and two young children. “ISIS is killing people everywhere, in shops, on streets, in homes. They kill and burn us. How can we live on? We for four years have to deal with it, but a week ago the situation has worsened. Unbearable. To solve the problem should be the government, and not we,” he gets excited, waving his arms.

This time we fit a woman in a long white sweater. She has something to say, although her eyes visible so very tired. On a chain around her neck hangs a silver cross. Name Halim for about 30 years. Like everyone else, she had to flee from El-Arish. “We, as Christians have no rights in the Sinai. We have many years of dealing with oppression, killings, abductions and threats. And the authorities do nothing. Our children do not go to school, they have no future. The Islamists are demanding that bus drivers did not carry the Christians, and the gas tank did not sell us gasoline. All who have relations with us, could face the death penalty. They distribute leaflets, to isolate us from the rest of the population. Our life turned into hell.” In her hands a small bag, in it all that she was able to take with them before leaving.

In the distance are seen the shores of the Sinai desert wind blown sand dunes. Is heard the whistle of a container ship that goes through the channel along the poor of the region, which soon may not be Christians. The Copts settled there since the 1980s, when Israel returned the land to Egypt under the peace agreement of 1979. We know little about the situation in Northern Sinai, which is under military administration after the intensification of military operations against the jihadists in 2013. Freedom of speech is not there, and the press are allowed to print only messages about the victories of the defense Ministry, if she doesn’t want to face accusations of collusion with the enemy. The war has claimed hundreds of lives among the military and civilians in all regions.

Cairo University Professor Victor Salama sees nothing unexpected in the strengthening of aggression against the Copts: “ISIS uses the problems of Egyptian society, to set people against each other. The events at Sinai speaks about the strong tensions between the religious communities, which is not so very different from the situation in Upper Egypt, where these communities are regularly at each other’s throats. And every time it ends the outcome of the Coptic families.”