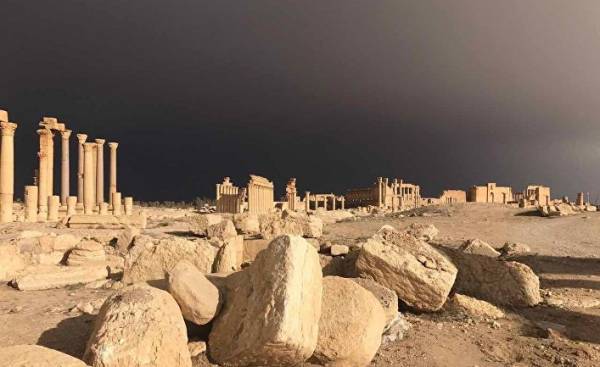 The ancient city of Palmyra lies in ruins. These words mean a lot, because PAL was already a city of ruins (from the very beginning, of course, but you know what I mean). Huge damage to these ancient buildings included in the list of UNESCO world heritage site, has caused “cultural genocide” of the “Islamic state” (banned in Russia organization — approx. TRANS.). This group conducts a campaign for the destruction of Syria’s cultural heritage in order to demoralize the Syrian population and to draw attention to their activities. The temple of Baal, the Islamists have turned into ruins, leaving in its place only the empty doorway. Arch artificially split in two, like she was cut with a knife.

Echo of destruction posted across Syria, forcing the international community to make appeals to restore the ancient ruins. As if to give impetus to the creation of brand new Palmyra, Institute for digital archaeology at Oxford in 2016, used the advances of 3D printing and recreated the arch in Trafalgar square in London as well as Park city Hall in new York. But maybe creating copies of ancient monuments is absurd. Because first of all, we appreciate the ancient architecture. Modern exact copy is unlikely to be an adequate substitute for the historical objects, whose value lies in their age. Art critic Jonathan Jones (Jonathan Jones) on the pages of the Guardian said that the “Mira cannot be turned into a counterfeit copy of its former glory,” stressing that “the restoration of ancient monuments using modern materials to replace lost parts unlawful.” And archaeologist bill Finlayson (Bill Finlayson) from the Council for British research of the Levant issued a warning, saying: “This dangerous precedent, as it says that if some object to destroy, it can then restore, and it will have the same authenticity as the original”.

These critics believe that the sense of historical restoration is an authentic replacement. But it doesn’t have to be that way. Historical restoration should not be just a reconstruction of the lost. It can deepen our connection with history and lead to the fact that we start to care more about the preservation of monuments of material culture. A broader understanding of cultural heritage goes beyond the conventional admiration for the ancient objects. It makes us realize our connection with history. The purpose of historical restoration is not to recreate the material authenticity, and to restore our relationship with the past.

This offer is for a restoration in some way connected with the debate environmentalists about restoration of degraded natural areas through ecological engineering. There it is about human intervention in nature with the goal of rebuilding what was destroyed by people. In his article, Faking Nature (Counterfeiting nature) (which later became a book) philosopher Robert Elliot (Robert Elliot) argued that the restoration of the environment contains internal contradictions. Human intervention in nature is “unnatural”, and therefore a person can only fake the natural processes that govern the space of nature. He believed that the value of nature lies in its independence from human control. And therefore the interference with nature certainly reduces its value. In response, the philosopher Andrew light (Andrew Light) wrote that restoration of the environment must be understood not as a perfect elimination of environmental damage, and as a way to revive our connection with nature. This principle should apply in respect of restoration of historical monuments.

But what does that mean? First, it is a question of raising awareness. Many archaeologists complain about how few people who cared and even knew about Palmyra before the attack on her. Now, when this city has attracted the world’s attention, its restoration will require much work. It is much more difficult than a terrible spectacle of wanton destruction. If you recreate parts of the city through 3D printing, we can better understand what has been destroyed. People will be able to see and touch these copies, and more aware of the scale of the losses. This tangibility will give much more than textbooks and articles. The more people feel the power of these monuments and artifacts, the better they will understand the motives of those who destroyed it all. In an environment of unprecedented technological and environmental change historic monuments and artifacts are in serious danger. It is important to give people the push that they prevented further destruction.

But the question here is about something more than the preservation of monuments of material culture. Even when people believe that the past is important, they usually pay attention to the victories and achievements, while ignoring injustice. TA-Nehisi Coates (Ta-Nehisi Coates) wrote in 2013 on the pages of The Atlantic: “”the Past” is anything that increases the moral obligations of companies. “Heritage” is everything else.” And David Lowenthal (David Lowenthal) in his book “Crusade heritage and the spoils of history” (The Heritage Crusade and the Spoils of History) noted: “History tries to convince by truth and succumbs to falsehood. Heritage exaggerates, makes omissions, openly turned inside out and frankly forgets, profiting from ignorance and fear.” Accordingly, someone raises the concern that projects of restoration of historical monuments do not generate interest in the true history, but instead the “cartoon” version of archaeology. Instead of trying to recreate the past, restoration of the Syrian antiquities may be unwanted propaganda in the interests of the Assad regime (who are equally involved in their destruction) and to divert attention from the suffering inflicted on the state during the civil war.

But it should not be. Heritage is a special kind of relationship with the past, and the restoration may cause us to rethink them. Instead of hiding the truth reconstruction can illustrate the importance of history in our time, and the attitude of different communities to the past.

It has given the effect, these projects should be implemented in the context of, in cooperation, and be self-critical. They should raise questions and cause doubt, and not just to pay tribute to the past. Unfortunately, many projects of restoration of Palmyra do not meet the criteria. Institute for digital archaeology could not give the context of his restored through a three-dimensional print of the triumphal arch. He didn’t have the appropriate software and information signs, and he failed to associate the monument with the violence and cruelty that led to its creation. In cooperation with the Syrian archaeologists, this project can be used in order to tell the West to colonialism in Syria and its continuing to this day the consequences. But instead this monument was just spectacular attraction. (It is appropriate to recall the work of American artist of Iranian origin Morechina Allahyari (Morehshin Allahyari), which creates three-dimensional printing ancient statues to draw attention to the era of colonialism.) The Syrians living in the cities where we have destroyed monuments from the list of UNESCO world heritage site, very resourceful restore and repair the building. What they could do with those millions that the Western countries spend on 3D projects? The fact that Palmyra and Bosra UNESCO world heritage site, is a global call for to critically think about our connection, our relationship with these historic places, about their past and about what responsibility we impose on those connections and relationships.

Worse, for good or ill, but the West has interest in antiquities, and manufactured in a three-dimensional print of the arc de Triomphe can be used for educational purposes. The efforts of the recent attention to the protection of cultural heritage (it is appropriate to recall the support and encouragement of the campaign of the National Foundation for the Humanities in the United States, and the Global Colloquium of University presidents held in 2016 at Yale) is confined mostly to technologies and to artifacts. But this attention can be used for other purposes. If we forget for a moment about the obsession of material authenticity, it will become clear that cultural heritage is not only ancient arches, but also moral commitments, and political lessons. Restoration projects that strengthen our connection with history, help you better understand our heritage and a past that must not only appreciate, but also to study, making conclusions for the present.

Eric Hatala Mattis is a Professor of philosophy working in the Wellesley College in Massachusetts.