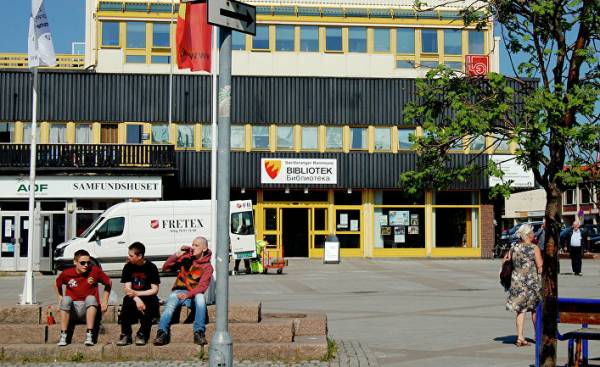 “I often went in jeans and sweaters. But when better acquainted with the people, began to dress as I used to. At first I was cautious, didn’t want to stand out, because I wanted to integrate into society, become part of it. That’s tried,” says Tanya Skoglund (Tanja Skoglund) from Alta.

She moved here from Russia seven years ago. Says that wears differently than in Russia, but it is also associated with the nature of its work, and the fact that she was older. When she started to work as a technologist in the company Sibelco, the staff was dominated by men, she dressed to fit in.

— Because you are Russian, or because you’re a woman?

“And because, and because. There was no Russian, and women were few. I had to be careful, I never came in a dress. Felt that it is not necessary, I didn’t want to looked at me like… Well, I wanted to me normally perceived as a professional.”

The researcher Vara Tatiana (Tatiana Wara) wrote his doctoral dissertation on “mobile body”. She found that Russian women are, even after living in Norway for 20 years, I feel that they should exercise caution in terms of clothing, if you don’t want to attract unwanted attention, obscene comments or suggestion to have sex.

Vara detail interviewed 21 Russian woman. Especially she was interested in the question of how the choice of clothing affects identity.

“If foreigners do not want to attract negative attention, they have to meet different requirements in clothing. In Finnmark Russian women feel that there is still widespread opinion that Russian woman + skirt = prostitute,” says Vara at the University of tromsø.

“Style in clothing is an important prerequisite to becoming part of society. I looked at how the way we meet people who stand out, affects their perception of themselves and the opportunities that open up before them when they begin to live in Finnmark,” says Vara.

Small differences in the nuances

The head of the Institute for the study of women’s issues KVINNEFORSK at the University of tromsø/the Arctic University Anne Teresa Lotherington (Ann Therese Lotherington) said that when any person gets into a new place, it adapts. But if the idea is to take a foreigner or not, she believes that Norwegian society is not tolerant.

“How Russian women wear makeup and dress up, only in some nuances different from manners to put on makeup and dress of Norway. Norwegian society needs to work on himself”, — said Lotherington.

Tanya Skoglund believes that the thesis Tatiana Vara is interesting, but does not reflect the reality in which it exists.

“Most of these reviews I not ever heard. But I can imagine that ten years ago they really were. There is nothing strange in the fact that you perceive, and I am glad I got to experience it not happened,” she says.