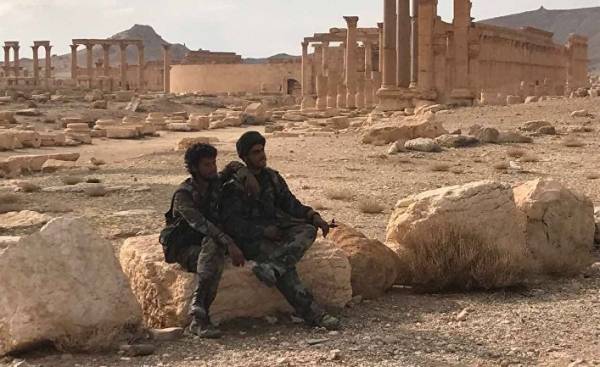 The city of Palmyra to the East of HOMS has become a place of strong exhaustion of the regime of Bashar Assad, who on March 2 this year announced the capture under the control of Palmyra after there was embossed the militants of the “Islamic State” (a Terrorist organization banned in Russia — ed). The latter has already managed to push them back Palmyra, but in December last year, the second time they took control of the city.

Again to control the city for Assad’s forces was not a simple task. Despite the support, great support in aid of consultants and the provision of aircraft delivered to Assad from Russia, according to the Syrian monitoring centre for human rights (eng.: Syrian Observatory for Human Rights, SOHR, — approx. transl.) in the course of the military campaign in Palmyra since the beginning of this year to March, government troops lost at least 115 soldiers and officers from among its troops and military formations fighting on the side of the regime.

A large number of questions arise about the determination of the regime to control the Palmyra, located in the desert, especially because most of the gas wells have already been lost. The decision about regaining control over the city should not be the first place in the priorities of the Syrian leadership — first there is the Russian insistence that because Palmyra is a victory, which, according to Moscow, be sure to keep.

The Acquisition Of Moscow

In Russia Palmyra perceive as the main argument for the validation of its presence and operations in Syria under the pretext of “combating terrorism”. The shock that followed after ISIS took control of the city and destroyed the ancient monuments, made the eyes of the world turn to this ancient city. Russia, having taken part in the expulsion of ISIL from Palmyra, advertised itself as a state that was saved from the hands of terrorists one of the most famous archaeological sites in the middle East.

Palmyra always appear in the declarations of the responsible persons when it comes to how Russia justifies its presence in Syria and the use of there new types of combat aircraft.

Thus, the unwillingness of Russia to release the PAL out of the orbit of its influence is understandable. This will allow you to save the argument by saying that, you can deceive the whole world and claim that we are fighting “terrorists” in Syria, and they pose a threat not only in Syria but also in Europe!

In connection with the return of Palmyra under the control of regime forces was unexpected nature of the exchange of statements between the Assad regime, Russia and those who belongs to the “great merit” in the liberation of the ancient city. In the course of negotiations “Geneva 4” the head of the delegation representing the Syrian regime, Bashar al-Jaafari said that “the Syrian army liberated Palmyra after the crimes committed by ISIS gangs, are in it together with their allies the Russians. They along with us are fighting the same enemy, they are also participants in the celebration of this victory.”

Palmyra as a trap

Nasser Abd al-Aziz, head of the “Centre for research and documentation” in Palmyra, in a statement to the portal “alsouria.net” he suggested that Palmyra is no longer important. He pointed out that the last time Assad’s troops took control of Palmyra, they did not move in the direction of area of es – Sukhna or in the direction of Raqqa, and was satisfied with the control of the city, which has remained the important economic opportunities that could justify the human losses incurred by the regime.

He added that the only aim of the opposition in Palmyra — drop strength of the ISIL fighters from the airport “Tayfur”. However, even in this case, “action still could have access to the airport,” said Abdelaziz, adding: “the decision of the battle is not the Syrian regime, and Russian military command. The fight today is on the southern and Western outskirts of Palmyra, and to the forces of Assad is guaranteed to entrenched in the city, they need to control the airport Palmyra, throwing him from ISIS. In the old days in these areas saw heavy fighting and is still the biggest loss of Assad’s forces occurred the battles on the approaches to these areas”.

Speaking about the system losses in the battle of Palmyra, Colonel Abdullah Faraj, a former officer in the army of the regime and the leader of the free army in the North of HOMS, said that “for fighting in desert areas, especially in this period of the year, soldiers must be well trained. We constantly see newspaper pages filled with images of Syrian soldiers in the desert. These soldiers are not equipped with any necessary equipment, and they get trapped before the militants trained in these conditions. This explains the large number of those killed by the regime in any direct confrontation with ISIS in these rugged desert mountain areas”.

Colonel Abdullah Faraj also indicates that one of the difficulties in the battles at Palmyra, is the fact that the clashes in these areas, the air force more effective than artillery, which is in a semi-paralyzed state, due to the fact that the shelling is often conducted without adequate monitoring purposes (due to the geography of the region), and the fighters, master of all, just hiding in caves.

On the other hand, the Islamic State relies on it to quickly penetrate into those places where the forces of the regime. This is especially true of places where flying artillery shells. This detection helps to easily destroy them, which is another reason that increases the loss of Assad’s forces.

Colonel Faraj in his comments portal “alsouria.net” difficult to answer the question of how regime forces are interested in Palmyra, given the fact that gas wells are located outside of the city, believing that the decision on the control of the city in the first place the decision of Russia.