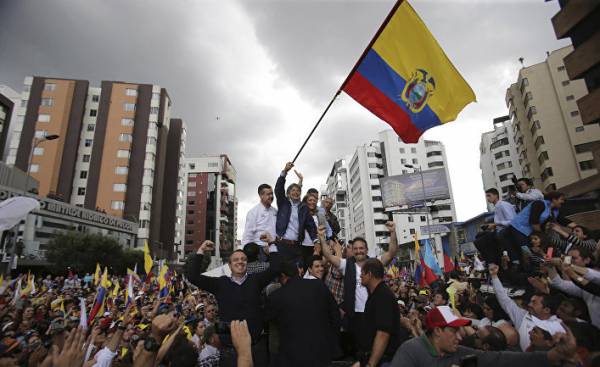 19 February, Ecuador held presidential and parliamentary elections. After treatment of 99.2% of the ballots that Lenin Moreno (Lenin Moreno) wins a convincing victory (of 39.35% of the votes) over Guillermo Lasso (Guillermo Lasso), who voted 28,13% of the voters. In third place Cynthia Viteri (Viteri Cynthia), scored the 16,28% of the votes. Moreno embodies the continuation of the Civil revolution which took place in the last decade, while the two main candidates of the right tend to spend in Ecuador neoliberal policies. The country will host the second round of voting, as Moreno gleaning just 0.65% of the vote to 40% needed to win in the first round, although ahead of his second opponent by 10 points. In April, Moreno will compete with the banker Guillermo Lasso. The two candidates represent entirely the opposite of the model of development of the country.

During the elections was also determined the composition of the legislature, elected 137 deputies to the unicameral National Assembly in which factional group Alianza País obtained a majority of 74 MP. Thus, the legislature is already in the hands of the government, which thanks to the most will be able to make ordinary laws, but with regard to the constitutional acts, they he will have to negotiate with other parties, since their adoption requires a qualified majority (75%) of the votes in the National Assembly. The victory of the Lasso in the second round would mean his exclusion in the Executive branch, while in the National Assembly it in the best case will be able to attract about 35 deputies.

Taking into account the events leading up to the Civil revolution, it cannot be excluded that this situation will lead Ecuador to political instability in the democratic system of the country before coming to power, Correa.

Election day was also held a referendum on the question of what civil servants do not have the right to keep the money in countries with offshore zones. For such a ban in favor of more than 55% of the participants. The results of the referendum directly affect the interests of the Lasso, which will have to withdraw their money from offshore after the national Assembly adopts this law. As we have said, it controls the fractional group Alianza País.

A government that will be formed on the voting results will determine the future of not only Ecuador, but will also have important implications for all of Latin America. Comeback right after a decade in power, Rafael Correa, will strengthen the view that the era of leftist governments has come to its end. Possible defeat of the progressive forces of Ecuador will mark the first care of one of the governments that have implemented a process called New Latin American constitutionalism (Nuevo Constitucionalismo Latinoamericano), which included Venezuela, Ecuador and Bolivia, as well as the first loss among the main core countries of the Bolivarian Alliance for the peoples of our America (ALBA). Along with poprawienie Brazil and Argentina can speak about strengthening of conservative tendencies.

Still, the continuation of the Civil revolution, led by Lenin Moreno and Jorge Glas (Jorge Glas) will be deprived of the arguments of the prophets of the end times and will prove that processes of change in Latin America is in full swing, able to overcome economic difficulties and do not depend on charismatic leaders. Anyway, all predict that no candidate will win a landslide victory over his opponent.

The victory of Lenin Moreno will mean continuity and the continuation of the course on public administration, whose main task is to improve the welfare of historically disadvantaged majority population and the reduction of social inequality. The successes achieved over the last decade in reducing poverty and inequality indicate just that. Specifically, it is possible to point out the following.

Between 2006 and 2016 approximately 1.5 million people ceased to be poor, and extreme poverty was reduced by half (approximately 900 out of this state).

From 2009 to 2016 poverty in its various forms has decreased from 27.2 to 16.9. This reduction was achieved through public policies that guarantee the right to work, education, social security, provision of water, decent housing, etc.

From 2007 to 2014 in Ecuador, the inequality according to the Gini coefficient fell by eight points, while in the whole Latin America it declined by three points.

There is no doubt that Moreno will go through designated Civil revolution, although the style of his presidency — if elected — it is likely to be different from the style of the government of Correa. Its course will be less confrontational and politically defined. And given the economic difficulties, it is possible that gains will be more modest than hitherto, and pragmatism in the management will be forced to go for more concessions to big capital. However, his public policy will be focused on the poorest of the poor and fight inequality.

Two main opposition candidate, both right-wing views, advocated a radical reversal from the model of the last decade. Judging from their statements, they can’t wait to destroy all that has been achieved.

The main opposition candidate is banker Guillermo Lasso, one of the main culprits of the economic disaster known as “Bank holiday” (“feriado bancario”), and the dollarization of the Ecuadorian economy in the 90-ies, when he was appointed Minister of economy and energy.

Among his supporters, the mayor of Quito Mauricio Rodas (Mauricio Rodas). The third candidate is Cynthia Viteri (Viteri Cynthia), vydviganii of the mayor of Guayaquil Jaime Nebot (Jaime Nebot), a prominent opponent of Rafael Correa over the past decade. Both teams tried to create a powerful coalition to confront Lenin Moreno, however, internal strife on a common presidential candidate was not allowed to come to an agreement, and shattered the opposition into several parties.

Although during the election campaign of the two main opposition candidate has declared that they stand on different platforms and have different approaches to the voters, to take second place and advance to the second round, they are United in their understanding of the structural and neoliberal politics. A distinctive feature of the campaign was that any constructive measures have been proposed, the emphasis was exclusively on the destructive. Since the proposal to cancel the 2008 Constitution — one of the most advanced in the world — and to return to the old order of things. In economic terms, as a Lasso and Viteri proposed a model involving reductions in the tax burden, which is beneficial in financial and industrial circles, while reducing the role of the state in managing the economy and social spending. At the same time they claim about the immutability of social policy in recent decades that is impossible if tax collections will fall sharply, while prices for raw materials will remain low.

In the field of international relations, they propose to abandon the integration processes taking place in the region in recent years, and even to secede from the Union of South American Nations (UNASUR), whose headquarters is located in Ecuador. This organization includes all States South America, including Argentina and Brazil, which, despite the reversal of their governments the right not decided on such a drastic step. Lasso and Viteri seek alliances with countries in the Pacific basin, tending to be more liberal politics. The free trade agreements are also an integral part of the political agenda of the candidates of right-wing forces. In their political programs, they indicate the necessity of signing similar agreements with the US, although with the coming to power of Donald trump moving in this direction ceased.

Despite the progress made by Ecuador in recent years, Lenin Moreno was not able to win in the first round, and, compared to the elections of 2013, when Rafael Correa received 57% of votes in the first round, the candidate of the bourgeois revolution, has lost 18 points. Moreover, Lasso won in a number of provinces, 5 of the 6 provinces of Oriente (Oriente), in the provinces of the Amazon, in 4 of the 9 provinces of the Sierra (Sierra), while Moreno won in 13 provinces, all of which are located on the ocean coast (excluding the Galapagos Islands). Thus, the country was geographically divided into two parts. Lasso won in the least populated and most developed provinces of the country, where a significant number of the Indian population. Should consider, what was the inadequate government policies, determine the cause of the confrontation between the Indian organizations of the Amazon where there was a conflict with mining companies and in the Sierra, where the Indian party “Pachakutik” (Pachakutik), wield great influence, have criticized the government. The other part of the country supports Moreno. This is the most populated province of Sierra and Costa (Costa), especially those that suffered from earthquake in April 2016, as well as Manabi (Manabí), where Moreno voted 53% of voters.

Despite this important victory, against the Civilian revolution in favor of more than 60% of voters. In recent years, the government lost popularity as a result of economic difficulties caused by the decline in prices of primary products and the growth of the dollar against the currencies of neighboring countries. The government of Rafael Correa spent a certain strength on the confrontation with groups that influence the government with the aim of preserving its corporate privileges. These groups, in particular the police and the army recently entered into an open struggle with the government about their special rights in matters of social security. Finally, mention should be made of a bad information policy, which led to misunderstanding of the historical requirements, in particular, law of inheritance and surplus value to increase taxation of the wealthiest citizens of Ecuador, which caused protests among the poorest segments of society. As a result, the government was forced to withdraw and amend the draft laws.

The outcome of these elections depends in Ecuador and throughout Latin America. The continued existence of the model, which had been significant improvements in the social field, is at issue, including because the model was not able to change the political subject, with the result that citizens strongly put the question on the return to models lost decade. In the case that a Civil revolution will be able to stand during this election fight, she has to give answers to many questions in order to be the mainspring.