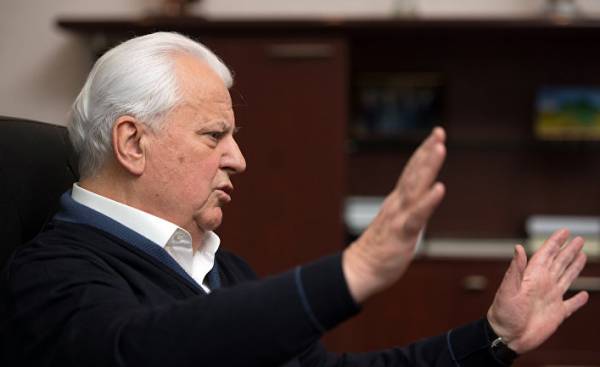 The first President of Ukraine Leonid Kravchuk, although for a long time and moved away from the “big” policies, but still continues to be a significant figure in the public life of the country. In his office, located near the Cabinet of Ministers, all full of life. The master in his 83 year, retains a cheerful mood and still actively interested in everything going on with Ukraine. In the first part of a great interview with “the observer” Leonid Kravchuk told about what kind of mistake was made by the authorities with the Donbas, about the distinctive characteristics of the leaders of the “L/DNI”, and the recipe of rescue of the occupied territories and much more.

“Explorer”: Let’s start our conversation with one of the most resonant themes in recent weeks — blockade of Donbass. You are a supporter or opponent of such methods?

Leonid Kravchuk: I think that before we talk about the individual problem, we need to define in the main. The important thing is how to build policies in the state that is not strong and authoritative. It may not shape their internal and foreign policy as he wishes, and should be considered with a global situation that is happening around you, and respond quickly to calls. The foundations of our internal and external policies are adopted and remain unchanged for a long time, but what we see now? The annexation of Crimea, Russian aggression in the Donbas. Part of the territory of Ukraine torn, and the policy framework remain unchanged. This means that the power doesn’t react as it should to the challenges of the time. Besides, now we have a very original relationship with that part of the territory that is not controlled by the Ukrainian authorities, but the relationship with her still exists. The question arises: on what base are these?

— The government, which responds to the calls that would be necessary to adopt a law that governs relations with the territories on the uncontrolled territories of Ukraine. That is, there was an unusual situation and it needs to be reflected in the law. Did not. Partially, this topic is regulated by the Minsk agreement, which States that the enterprises which are on the uncontrolled territory, remain in the working economic relations with Ukraine. As it should be. But this point fails because there is no such circular, the particular Ukrainian authorities. Thus, we have the situation of domestic and foreign policy has changed, regardless of the wishes of the Ukrainian authorities. Conditions have changed, but life goes on, and you need to give the answers. And in such a situation, make separate groups of people?

— Alluding to the fact that just trying to become more active?

Yes. If not regulated in the law order, they enter their order, and this is called the Makhnovshchina. That is, no order is called the order, because each group can set its own rules. Of course, the impact on Ukrainian life, the economy, and the budget is tremendously negative. And you asked how I feel about that. From a moral point of view, I think so: you cannot trade with someone who kills you. And one cannot condemn people who go chest on the rails and say: “You ridicule our fellow human beings, you keep them in the basement, torturing them, so we won’t trade with you”. How do they behave? They are on the side of honor. But how to treat other people who lose because of the blockade work in the mines and factories? It’s their life. If the state time has settled this time and not grazed back, now would not suffer the people, businesses and economy.

— The reaction of the warlords looks like a tantrum. Today (the conversation took place on 3 March. — approx. ed.) they declared a trade blockade of Ukraine, which I think is pretty funny. Prior to this Zakharchenko said that we left there for 60 days. Do you think it’s just panic and stupidity of this character or indeed should be expected in the near future some kind of meanness?

— I know that is a feature people like Zakharchenko and his ilk? They can afford almost everything: to call, to call, to make decisions, to scare, to shoot. They are not responsible, because it is not included in the system of international relations. So they should look as they are. Is impostors, rebels, terrorists, separatists… I don’t even know how many labels you can stick to them. It is a fact. Note that I not call them criminals…

— The international court of justice will be required. After all people will call them as needed. Therefore, what they say, you need to watch with irony. Terrorists any day can stop it and will not bear personal responsibility, because they — no. Will be responsible those who lose because of them, work, money, resources. These “passports”, which introduced… Zakharchenko don’t suffer, take passport and go to Russia with billions. Any grandmother might do so as well, but what she’s going to do with 3? Those who are now clapping that got the opportunity, still do not understand that they need money in order to use it. I understand that we are dealing in Donbass with people without honor and conscience, which sooner or later you can throw out any trick. Therefore, the Ukrainian authorities should think in advance what to do in such a case, to provide a place to maneuver. We did not, on the basis that somehow it will be.

— You told about the elderly. They were all clear. But most of the young, those who were for Ukraine, have already left? That is, there were basically those who support the separatists, Russia.

— That Ukraine frees these areas. What to do with such people? Close your eyes or this problem can be solved somehow? No sweeps in the style of the NKVD.

— I think a spell about what you need to do something because it’s our people — is not rational. You cannot force a person to be loved, if not — then no. They do not perceive Ukraine. But there is one important point. They do not perceive is not from birth, but from the fact that they are in my head hammered the idea of the Russian propaganda. They were so larded with hatred to Ukraine that they do not perceive the Ukrainian government, considering it a crime. I think that to leave them would be very unjust from all points of view, because not all their fault. Blame those who sit in the Kremlin and those whom he sent out, and they are hostages. So we need more patience. But this does not mean that we should concede. Come to me people from those regions bring textbooks, notebooks, any accessories. All this is already penetrated by Russia. Ukrainian there is no longer a penny.

— It is necessary now, in my opinion, to strengthen counter-propaganda. To do everything we can to reach people with at least one positive idea that they knew or heard that there is a territory near them, where people live differently. And they can live where they won’t rape and kill. It is not the Ukrainian army kills them and they kill those who want to spread the ideology of the “Russian world” for the rest of our territory. To come up with something else to Keep them we can’t, it would be again unfair. So we paid the tax, and this tax is kept man, which is the enemy of Ukraine. Need time to they came to, felt. We must do everything not to be unemployed, to work the factories. Regardless of regardless of whether they belong to Rinat Akhmetov, or someone else. So now we need to support someone who can help people to organize work, to give food and assistance. And to now internal war with each other…If you see, as you read, of course, more than I, many people already believe that our internal war is much more serious, more covering than the outside.