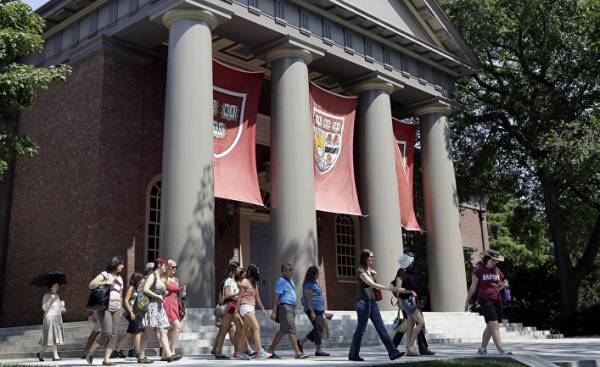 Today things are changing in Britain. And it’s not Breaksit. This was, in fact, the only litmus of what is happening in the country somewhere deep and almost unnoticed in the capital. The changes affect all spheres of life of the UK. They touched even, it seemed until recently, untouchable and unconditionally authoritative niche of education. Brand “British school” or “British University” today does not produce that impression which was made before. Yet to admit this establishment, and all come with hopes in London, do not want to, but its the same British experts have already been warning and talking about it out loud. Sagging touted educational system in the UK becomes evident.

When it was seen that prestigious University were paid to a blogger for promotional material? But now this practice in England is not exceptional: “Heading to the open day at the University of London SOAS, in typical fashion videoblogger — aspirated, undying enthusiasm and short cutting scenes — Evan Edinger (Evan Edinger) recites on a portable camera: “I love to come to other universities, because I like to imagine as if I have another life, and I went to study in another place.” Apparently, this is not the only reason: as you might guess from the humble hashtag #ad (advertisement) in the title of the video, the University paid the blogger for this review.” It writes in the recent issue of the Economist, where the authors of material on educational topics, trying to draw attention to the problems that capture the University world in the UK.

Experts say that the current trend of universities is not just paid bloggers, but now these solid and until recently, inaccessible schools use the most banal advertising. The representative of the marketing company “Penna” Rachel Killian (Killian Rachel) noted that if earlier the universities have advertised their services a maximum of three months per year in the period for the submission of applications for admission, now it is done year-round and without interruption. According to the authors of the article, massive, causing, to put it mildly, issues of changes that happen in full swing in the field of higher education, were the result of reforms adopted at the time the coalition government of conservatives and liberal Democrats. First, in 2012 the company raised the maximum platia for the year to 9 thousand pounds. (14 thousand dollars), and later, in 2014, removed the restriction on the total number of applicants. The then government decided in this way is simply to save the state money on education. From this moment, the time when students in England were competing for places at universities, and acted the best, you need to forget. The story of the famous University system England passed into oblivion. Not all noticeable, but it is quite obvious that the system of education development in the country has gone in a new scenario. And now, today, on the contrary, British universities compete to recruit more students. Because students are the money. More students — more money from the University.

Experts say that universities are faced with a choice: to attract more students or reduce costs. Given the fact that the majority of students receives a loan from the state, which pays for tuition, almost half of the revenue of universities consists of the money, whereas in the 2006 academic year, those contributions amounted to no more than a quarter.

The annual cost of studying at British universities, partly funded by the state, the highest among OECD countries (OECD, Organization for economic cooperation and development — ed.), however, there are an increasing number of students from low-income families who take a loan easily and without much difficulty and contest go to school. Student of Bristol University of the West of England (University of the West of England) about this sensibly remarks: “In theory, the income from each student may be 9 thousand pounds per year, but the money in reality does not exist. This money is not until you start to earn, and pay off your loan.” This whole scheme of admission to higher education institutions is the British expert concerns. They see, in fact, formed a “homogenization” of the way in which students go for higher education. In other words, it is easy to do for the money, not abilities.

Experts point out another aspect that is directly linked to the University world, money and business. So, the prospects for the expansion of educational facilities has triggered a construction boom. Today, for example, a large part of the campus of the University of the West of England has become just one big construction site. The universities are bulging with glittering and build new housing to accommodate the greatest possible number of paying students, mainly, of course, visitors. The authors of the Economist cite data of the consulting Agency “Barbour ABI”, which suggests that even in 2013, British universities are spent on the construction of 2.4 billion pounds, which was 43% more than in 2012, the Dynamics of growth in construction costs continues even now. At the same time, students from low-income groups can not afford to live in these new expensive hostels and rented the cheapest accommodation. Student activists are concerned that unequal opportunities of students, differentiation of social-economic conditions of life and study, lead to disunity and stratification within the student community. And this is a worrying factor.

However, as noticed by British experts, the main concern is that the statistical number of students in England are impressive, but it is impossible to hide the fact that they receive education of very average quality. And in this, as the authors of the article, is not surprising. With so many students crowded audience, and what is more, all simply lacking the time for individual work with teachers. Which as you can tell? Even the Minister for universities and science Joe Johnson (Jo Johnson) is forced to admit the fact that today the level of teaching in universities in the UK is mediocre. The current government is trying to rectify the situation and hopes that the adoption of a new state scheme for the control over observance of standards in education (the Teaching Excellence Framework), will force the universities to pay attention to the quality of teaching.

The expert community is concerned that competition between universities will increase and will continue to negatively affect the quality of education. In the past year, departmental organization, funding British universities (Higher Education Funding Council for England), a report was prepared, in which the authors openly warn that the reduction in cash and increase in debt will lead to the fact that the financial situation of universities will be even more unstable. British experts ironically notice that it is hardly possible to find experts in public policy who are willing to predict the actions of the government in the event of bankruptcy of some University. A Professor at the University of Manchester Andy Westwood (Andy Westwood) said that most higher education institutions in the new environment was in dire financial situations — they are, as a rule, children from low-income families located in those regions that Prime Minister Theresa may promised to “revive”. As noticed by experts, she has to answer a difficult question: whether the decline of these universities is an acceptable price for prosperity of the more competitive universities.

A few years ago, when relations between Britain and Russia was better prepared the Draft intergovernmental agreement on mutual recognition of diplomas. In 2014, the crisis between the two countries after the coup d’etat in Ukraine backed by the West, the British put this project on the shelf — so that seems to be how to punish Russia or, as they like to talk politics here, demonstrated that “business is not as usual”. In Moscow it is perceived as always in such cases, calmly and continued to enter into such agreements with other European countries. In the new conditions, taking into account the opinions of British experts, probably, should think about assessing how the current state of education in the UK meet the increased quality standards of education in Russia. Stereotypes are not always good guides.