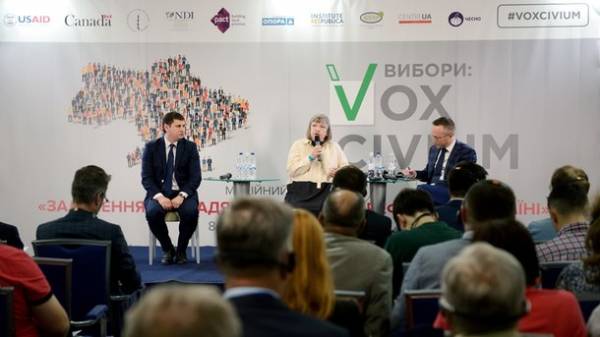 Media marathon “Elections: VOX CIVIUM. Citizen engagement in electoral reform in Ukraine”, organized on 8-9 June in Kiev, began a dialogue with policy makers, experts, public activists and members of the decisive role of citizens in promoting electoral reform in Ukraine, UNIAN reports. Organizers aimed to raise the level of awareness of citizens about their role in the reforms in Ukraine and gathered election experts, parliamentarians, activists and party members to discuss the role of political parties, civil society and citizens in promoting electoral reform.

Pat Merlo, Director of electoral programs, NDI commented on the reforms: “In all countries and in Ukraine in particular, citizens are willing to reform. You need to introduce them to such measures, to discuss with them the agenda and they knew how each citizen can help in the reform process. Show citizens that their politicians listen to what they listen to media”.

Alexander Skiba, the Vice-Chairman of the Institute “Republic”, said that Ukrainians need to be active, to learn more information, more engaged with public organizations, to influence and use the tools of participation, communicate with the authorities. The results of studies of the Institute, 15% of Ukrainians know their local deputies, however, if at least the 15% will systematically declare their position to politicians, any reform will be to move much faster.

During the marathon, the participants exchanged experiences of different approaches to citizen engagement in electoral reform and learned about the creative and educational methods of its promotion in Ukraine. Maria Leonova, chief analyst CENTREUA, noted that the policy can only be successful with the support and understanding of citizens. “First of all, citizens need to attract in order to understand whether they will keep and what positions need to be defended in the new policy,” the expert added.

Fruitful cooperation of voters, politicians, social activists and media have a positive impact on the promotion of electoral reform in Ukraine, – assured the organizers, but no less active should be measures to increase public awareness of the importance of their role in the electoral processes. Today, the citizens should be the driving force in the promotion of reforms in Ukraine.

Media marathon “Elections: VOX CIVIUM. Citizen engagement in electoral reform in Ukraine” was organized in cooperation with the program “Responsible and accountable policy in Ukraine”, which runs the National democratic Institute (NDI) and International Foundation for electoral systems (IFES) and the project “Delucia!” with the support of the U.S. Agency for international development (USAID) and the government of Canada.