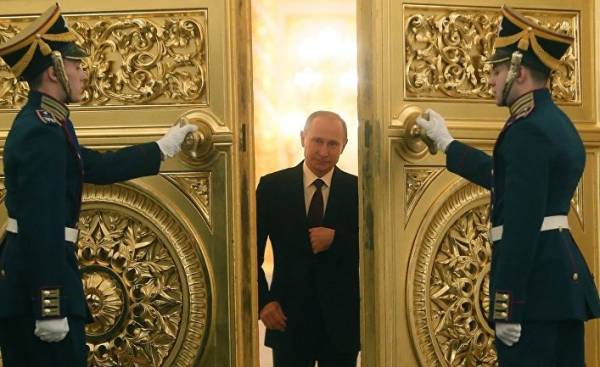 “We are here to educate a new elite, says Zurab Chavchavadze, a 74-year-old smart, elegant, the Director of the gymnasium of St. Basil the Great, sitting in his office beneath a large portrait of the last Russian Tsar Nicholas II. Students will be sane, faithful, intelligent and Patriotic, and they will have all the chances to come to power.”

The gymnasium is a complex of majestic buildings located around the new Cathedral in the prestigious suburb of Moscow, returned to the traditions of tsarist Russia to plant its 400 students a sense of patriotism.

Approaching the centenary of the 1917 revolution in Russia, which after centuries of rule was overthrown the Romanov dynasty. Chavchavadze belongs to a small but influential group of Russians, who in the tsarist past to draw inspiration and even hope that soon the day will come when the monarchy is restored.

“Look what the Russian people have made of Lenin, Stalin, Putin. Cost someone to stay in power for several years, and they became the objects of worship. Russian people to aspire to the monarchy, the Russian soul — monarchist,” says Chavchavadze.

In the gymnasium of St. Basil the Great on the walls of corridors on high school students watch portraits of the kings. In the lobby stands a statue of Catherine the great, and in the ball room hang huge portraits of eight kings. The program here studying Scripture and Latin and the history books, taught in school, was specially composed to order to avoid those positive ratings of a significant part of the Soviet period, which is expressed in the usual Russian textbooks.

The school is the brainchild of the mysterious Russian financier Konstantin Malofeev, who is called “Orthodox oligarch”. I think that Malofeev, who has extensive contacts in the Kremlin, financed the separatists in the East of Ukraine and created nationalist Orthodox TV channel “Tsargrad TV”. As he said in an interview with the Guardian, the school must become “Orthodox Eton”, which will train a new elite for the future of the Russian monarchy.

“The mission of our school is to make every effort so that our graduates become Orthodox patriots who will continue the millennial tradition of Russia, and not only the tradition of the last 20 or 100 years, said Malofeev, speaking to reporters in her Central Moscow office, decorated with Orthodox icons and a large portrait of Tsar Alexander III, ruler of the XIX century, known for its conservatism. In my opinion, it is very important to restore the tradition that was lost in 1917”.

After the February revolution (named for the month in which it started then adopted by Russia to the Julian calendar) the country embarked on a brief liberal experiment, but in October of the same year in the result of the rise of Lenin the Bolsheviks the provisional government was overthrown. In 1918, Nicholas II and his family were shot. Many aristocrats during the civil war in Russia fought on the side of the white armies, or fled to Western Europe and sometimes even further.

In the years of Soviet power to discuss the topic of “white” was forbidden. Family Chavchavadze returned to the USSR in 1947 on the wave of patriotism after the victory in the Second world war, but his father was immediately arrested as a spy and sent to 25 years in GULAG, and the family was exiled to Kazakhstan.

In the post-Soviet period, re-emerged interest in the history of the force, who played for the tsarist government. Nicholas II was canonized by the Russian Orthodox Church. Though the government of Vladimir Putin admires the achievements of the Soviet Union, the creation of the Soviet state in 1917, is considered a tragedy because the resulting bloodshed and turmoil.

42-year-old Malofeev was born near Moscow. His parents lived in Akademgorodok is a special village for the Soviet scientists. During Gorbachev’s perestroika he was a teenager was reading books about “white” and quickly became a monarchist.

“When I was 14, I read two books that have had a huge influence on me,” he recalls. One of them is memoirs of a former tsarist officer, who continued to publish emigre newspaper in Argentina. The second book was “Lord of the Rings”. “The image of Aragorn returning to Gondor, was for me the embodiment of the monarchy. It also affected my monarchist beliefs,” he says.

Fascinated by the idea of the monarchy, Malofeev wrote a letter to lived in Paris, Grand Duke Vladimir Kirillovich, born in 1917, and after the execution of Nicholas II and his family by the Bolsheviks, and the death in exile of other members of the Royal family was considered the head of the Romanov dynasty.

After reading the letter, Malofeeva, the Grand Duke asked Chavchavadze, who then worked as his assistant, to deliver the response personally. Since then, the two men kept in touch.

Malofeev went to study at the law faculty of Moscow state University, wrote a thesis on the constitutional mechanism by which modern Russia would restore the monarchy, after which he engaged in banking and quickly became one of the richest people in Russia. He suggested Chavchavadze to lead the school, which moved to new premises in 2012. Its graduates, hopes Malofeev, are the backbone of the “inevitable” future of the tsarist regime in Russia.

According to Malofeyev, professional politicians are corrupt, and the main thing for them is to win elections. Monarchs may rule, without interfering in dirty politics. He does not consider Putin one of the dirty politicians-Democrats as to the post of the President of Russia has offered Boris Yeltsin.

“He never sought to be elected: he was found and appointed to this post, and it turned out that he was sent by God. Who would have thought in 1999 that Putin will come to us, and Russia will again become Russia? It happened by the will of God,” he says.

He argues that, according to polls, the number of Russians who want the return of the monarchy has increased over the last decade, from 15% to 25%. He attributes this to the personal popularity of Putin.

Among others who joined the monarchist agenda Malofeeva, there is Leonid Reshetnikov, a former General of the KGB, foreign intelligence service of Russia (SVR) and until recently head of the influential Institute for strategic studies. Now he heads the company “double-Headed eagle” and its Moscow office is adorned with portraits of Putin and Nicholas II.

Reshetnikov says that he first became interested monarchist ideas in the 1980-ies, when he was a KGB agent in the Balkans, where, he noticed, was not true of the supporters of communism. He, too, is not enthusiastic about democracy.

“Our liberals want to be like Europeans, but God created us different, — said Reshetnikov. — Liberal democracy is like Marxism — it was brought to us from London, Paris and new York. We need to return to the point where we, in 1917, went down the wrong path”.

According to Reshetnikov, apparently, will be decades before Russia could seriously think about the restoration of the monarchy, and before you put such a goal, society must become more Mature and spiritual.

However, according to Malofeeva, it could be sooner. He considers it quite possible the coronation of Putin: “Nobody wanted to Yeltsin was in power forever, but a perpetual reign of Putin want”.