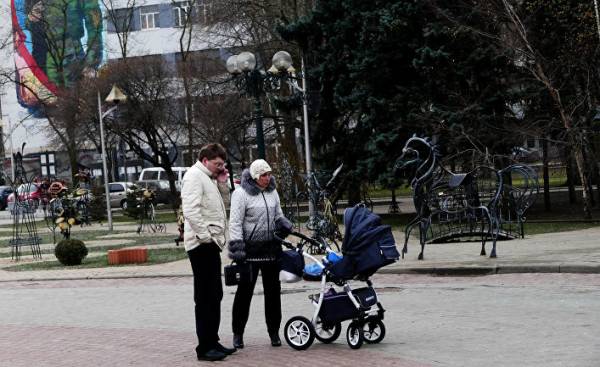 In the East of Ukraine there is a boom in the birth rate — and this despite the fact that the region is involved in a war between Pro-Russian forces and the Ukrainian regular army. In 2014, when the conflict broke out in the town there were 45 newborns, and in 2016 — after two years of constant bombardments, sieges and constant emigration of the population to safer areas of the country — came to light 110 children. Avdeevka is a small town with a population of less than 20 thousand people (up to 2014 it amounted to almost 55 thousand people), located in the Eastern part of the country, just six miles from the epicenter of the conflict, Donetsk.

In an interview with AFP gynecologist Svetlana Khromchenko was limited to statistical data. According to her, increase the birth rate against the background of military conflict has no scientific basis, however, stress “as a factor, pushing the family close” — and therefore to more frequent sexual contacts “may explain the increase in the number of pregnant”.

Illustrative case a 40-year-old Alena’s Gorbatovo. Alena and her husband live in Avdeevka, they recently had a daughter, which they called Miroslava. In Russian and Ukrainian, the name means “Glory peace”. For many years they tried unsuccessfully to conceive a child, and now, just when their hometown besieged by troops and destroyed by bombs, they have a daughter.

“In recent years, I watched as children born to people aged 40 years and older,” adds Dr. Khromchenko, talking about childbirth, which she took by candlelight, until the city was equipped with an emergency generator. “Stress somehow affects female hormones, and the apparent barrenness disappears,” — said the doctor.