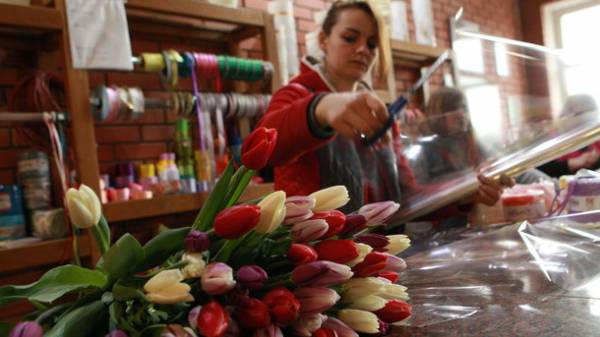 This year many women will be surprised by the gifts that they have prepared men. In addition to the traditional flowers, perfume and jewelry, ladies can count on unusual surprises. Analysts Prom.ua especially for “Today” has prepared an analysis of the base period and the current pre-orders.

READ THE ENTIRE LIST! As you can see from the infographic, this year women were more likely to order a gift fitness wristband- instead of cosmetics, perfumes and jewelry. Sale fitness, new products, fixing the distance traveled by the body podschitivala burned calories, measure heart rate, blood pressure and having many useful features has increased compared to last year, seven times or 600%. Although in absolute numbers the fitness wristbands are still inferior to traditional gifts. But the jewelry of gold and silver, on the contrary, are falling. This is the only position, which give less than last year. The ordered gifts are the most popular women’s dresses, needlework and kitchenware. Next come the appliances, and, judging by the average cost of a check in this category — more than 1500 UAH, — it is not hair dryers or Curling irons, and at least a coffee maker or a vacuum cleaner. Still in trend cosmetics, jewelry, and completing the top ten most sought-after goods of intimate purpose: sex toys, lingerie and the Kama Sutra. Moreover, the demand for the latter grew over the year by 60%.

TRADE. The sellers have noted earlier, than a year ago, the revival of demand in surprises for women. “The excitement before the 8th of March began early — from February 23, rebounded sales of cosmetics, Housewares, cosmetics, sets, bedding, smartphones and accessories. Suddenly, with traditional favorites joined by sports gadgets, fitness trackers, yoga mats, home gym. Buying them is much less than the perfume/mascara/lipstick, but the dynamics of the rolls. For example, from 14 to 28 February bought six times more trackers than the previous year”, — told us in one of the shopping centers. Another trend that analysts say Prom.ua is the increase in demand for dresses and bags. Given that they are bought mostly women, with high probability, it is a gift for yourself to look stunning in the celebration. Home textiles — tablecloths, napkins, towels — take not only men but also women, gift, mother, mother-in-law, friends, relatives, which is difficult to guess the size of clothes or brand name perfume.

PURSE. On average, Ukrainians are willing to spend on a gift for March 8 713 UAH, without regard to colors, the most modest bouquet which will cost the holiday to 50-60 UAH. Compared to last year, check the most popular gifts decreased by UAH 23, but retailers attribute this to the error of the calculations. According to the Director of the Ukrainian Association of trade networks suppliers Oleksiy Doroshenko, the real purchasing power of the population remained at the level of the previous year, as increased prices and wages. “But many gifts, such as accessories for mobile telephones, fell. It has also reduced the cost of the average ticket,” explained Doroshenko. 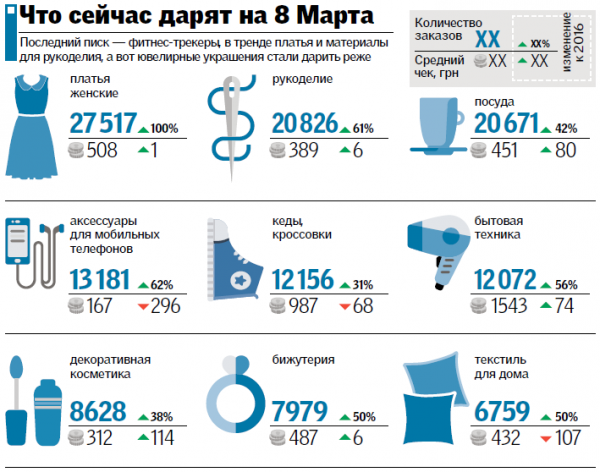 TRENDS. “The sporty trend is associated with the fashion for a healthy lifestyle, which increases every year. In 2016, the demand for sporting goods has grown by 80%,” — said the head of the Prom.ua Ivan Tailor. — Another favorite 2016-2017 — goods for needlework. The demand for them before the holidays reached its peak. Drawing, beading, stones, thread — enjoyable and inexpensive hobby that can be recouped if you decide to sell products as handmade that are also in trend in 2017″. By the way, despite walking on the Internet lists of “forbidden” on the 8th March gifts, such as lingerie, intimate hygiene products, cheap jewelery, psychologists believe such lists far-fetched. “You can give everything. Depends on who gives and who gives, — told us the master of psychology KNU. Shevchenko Natalia Trushina. — Cheap original jewelry may be beautiful, and a gold ring with a stone-a”cobblestone” look awful. Why not give a beautifully packaged handmade soap with a delicate aroma? And anyway, anyone who focuses on such lists, is regrettable, for he does not know his woman.”