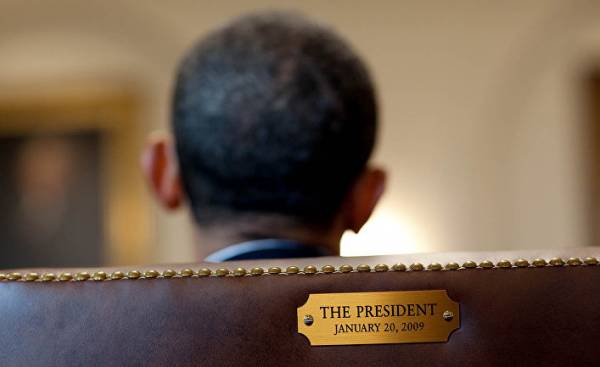 Attempts by Democrats to raise suspicions about the alleged (and now unproven) ties between the election headquarters of the President of Donald trump and the Russian authorities gave bright the opposite effect.

Now all attention is focused on the alleged actions of President Barack Obama and his administration for listening to and monitoring the headquarters of the trump, as well as the efforts of his aides to spread compromising information about trump for all government departments. The purpose of these actions was to create a basis for further investigations, and possibly to leaks in the media.

On Sunday morning the White house released a statement in which he indicated that the President will ask the congressional Committee leading the investigation of versions of Russian hackers, in addition to consider, “if not abused Executive power in 2016 its powers”.

The media continued to harp on the fact that no evidence of abuse was not, though the evidence is obvious.

The first time a President Donald trump said about the alleged audition on Saturday on Twitter. Radio host mark Levin (Mark Levin) called these actions “silent conspiracy” of employees of the Obama administration, which has struggled sought to weaken the trump. Approval Levin, published on Friday on the News website Breitbart, in turn, is based on information from leading media outlets including the New York Times and the Washington Post. The website of Street Heat, who published this information cannot be counted among the leading media of the dominant direction, but the BBC in January also announced about this. The same was done by the British Guardian, which definitely belongs to a mainstream direction, although with a large left roll, therefore it can not be called sympathetic to Trump.

​
In the Obama administration there was an immutable rule, which consists in the fact that no official from the White house in any case should not interfere in an independent investigation conducted by the Ministry of justice. As part of the practice, neither President Obama nor his aides from the White house never gave any guidance on surveillance of American citizens. Any representation to the contrary is simply a lie.

However, Matthew Boyle (Matthew Boyle) from Breitbart News called it a “rebuttable denial”. Should elaborate on that statement.

“In the Obama administration there was an immutable rule, which consists in the fact that no official from the White house in any case should not interfere in an independent investigation conducted by the Ministry of justice”.

Note that in this sentence it is not disputed the fact of the sounded charges, which consists in the fact that the Ministry of justice asked the court for control of foreign intelligence for permission to conduct surveillance assistants trump; that when the permission was granted, the surveillance continued even despite the fact that no evidence of violation was found; the Obama administration relaxed the rules of the national security Agency, so it was easier to distribute information to governmental agencies; and that Obama’s aides from the White house was doing this, contributing to leaks provocative (and incomplete) information in the media.

In addition, there is reason to doubt the assertion that the White house “never interfered”. The New York Times reported in January that “the White house was getting reports of intelligence based on interception of telephone conversations and e-mails”.

Moreover, the first part of the sentence raises doubts about the veracity of all the statements of the official representative of Obama. Lewis could have just said: “No official of the White house never interfered in any independent investigation conducted by the Ministry of justice”. It would be a clear refutation. However, he referred to some “immutable rule” that allegedly acted.

All this gives the opportunity to the rest of the White house to distance itself from abuses in the case of information that someone has interfered with the investigation by the Department of justice. (Of course, Obama will be outraged if it turns out that someone broke the “Golden rule”. He will be able to say that I learned about it from media instead of directly.) Obama’s aides in public relations is well known for the thoroughness and care with which they formulate a rebuttal.

Next. “As part of the practice, neither President Obama nor his aides from the White house never gave any guidance on surveillance of American citizens.”

It’s a meaningless denial, as the court on control of foreign intelligence deals with issues of surveillance of foreigners, although investigations may emerge and American citizens. The Ministry of justice could apply to the court for listening to foreign individuals and organizations that are suspected of supporting communication with the staff of the trump, and then use this permission for surveillance by the staff of trump. According to media reports referenced by attorney Andrew McCarthy (Andrew C. McCarthy), that’s exactly what could happen.

Again, this proposal does not deny that someone from the Obama administration still could order the carrying out of such surveillance.

“Any statement to the contrary is just a lie”.

Here we have a categorical denial designed to protect Obama himself, but in a special way. If when popping out inconvenient facts, he can admit that his administration is still up to something. Furthermore, Democrats well knew how to design a sophisticated chain of statements to the public so that you can create plausible deniability for their superiors. So in the headquarters of the Clinton worked the scheme the annoying harassment of leftist activists to the candidate Donald Trump rallies to provoke violence. (Organizer of this scheme 340 times was in the White house Obama, 45 times and met him personally.)

As announced recently the New York Times (and this seems to be a reputable newspaper), there is no evidence to suggest that “the headquarters of the trump conspired with the Russians to the organization of hacker attacks and the impact on elections”. But there is plenty of evidence that leaving the Obama administration could use the services of the intelligence agencies for the implementation of political actions to the detriment of the Trump. As noted in his Sunday gear mark Levin, the media simply refuse to report on their previous reports.

But even without the sensational statements of the President about the audition today, it is undeniable that leaks of classified information to harm the Trump were very many, and that the Obama administration could take steps to encourage implementation of such leaks. (Charles Krauthammer (Charles Krauthammer), doubtfully attributable to the conspiracy theories, on Friday called the effort, “revenge of the losers”.) This is a serious allegation and the former administration certainly will have to speak in Congress.

But if the Obama administration really ordered to conduct surveillance of the headquarters of the trump during the election, and if Obama or anyone else from the White house knew about it (or created a scheme of “plausible deniability”, allowing to conduct surveillance, but not allowing myself to learn about it directly), it is an even more serious problem.

In this case, it may be that the story about Russian hackers were not concocted in order to explain the humiliating defeat in the elections, and for the concealment of this scandal.

Joel Pollak, senior editor-consultant at Breitbart News. In 2016 he was named one of the most influential people in the news media. His new book is called “How to win trump. The history of the revolution from the inside” (How Trump Won: The Inside Story of a Revolution).