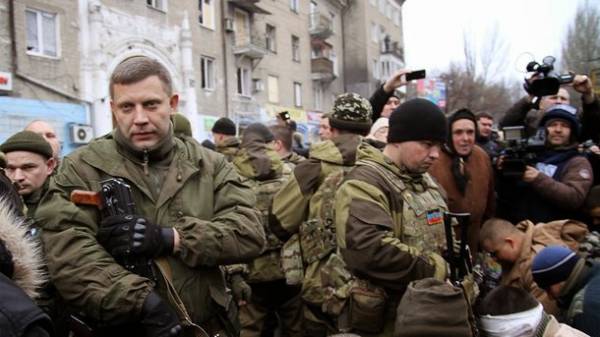 The self-proclaimed leader of the so-called “DNR” Alexander Zakharchenko said that cuts all ties with Kiev and declared the blockade of Ukraine. He stated this at a press conference, reports RIA Novosti-Ukraine.

According to him, in the occupied territories have learned to live in the conditions of a trade embargo Pro-Ukrainian activists.

“We cut all ties with Ukraine, which are fighting. Yes, sold the coal to get money to pay salaries here. But due to the fact that we have learned to live in the blockade, we are announcing a blockade of Ukraine”, — said Zakharchenko.

Was earlier intercepted telephone conversation, Alexander Zakharchenko blockade. The security Service of Ukraine said that militants in the Donbas want to use the blockade ORDO for the so-called “nationalization” of enterprises, which remained in the temporarily occupied territories.

“The negotiations show that the tip of the terrorist organization “DNR” really interested in this blockade, and prove the artificiality of the related “ultimatum” to the Ukrainian authorities”, – is told in the message.

On 1 March the Cabinet of Ministers approved the procedure of movement of goods between controlled and uncontrolled Ukraine territory of Donbass. The effect of this decision applies to individuals and entities that carry out such movements.