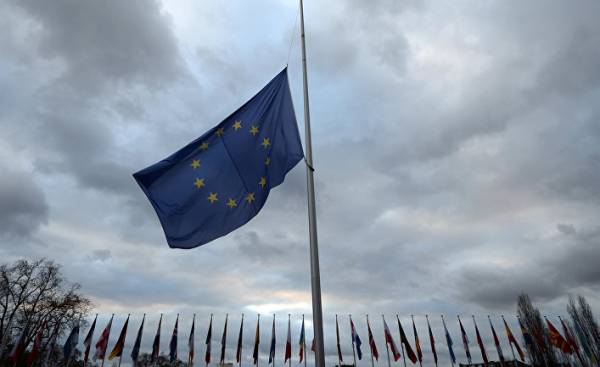 This year will be decisive for the Eurozone. In the period from March to September in the Netherlands, France and Germany will hold elections, and their results will determine the future of the single currency of Europe. Italy, too, can hold the elections before the end of the year. In the light of uncertainty the main players in the Eurozone take steps to protect themselves against possible future adversities. About why the Eurozone is at risk of collapse and how the collapse of the possible impact on Europe, telling in its report, the experts of the American private intelligence and analysis company Stratfor.

Italy government hangs in the balance. But regardless of when the country will hold its next elections, the fact that almost half of the electorate supports the party who want to leave the Eurozone, will supply the international markets and Eurozone countries are in a precarious position. Anxiety will grow even more as members of the center-left Democratic party of Italy announced that they have formed a new political party. The newly formed force can undermine the effectiveness of the ruling party against euroscepticism configured power “Movement 5 stars”. The front national in France wants to hold a referendum on Euro membership, say analysts.

Meanwhile, the threat of a Greek exit from the European Union has increased, according to Stratfor. Athens recently pledged to carry out economic reforms in order to receive the next tranche, but some measures include politically sensitive issues such as pensions and labour laws that may provoke political instability or social unrest. Since Greece’s coalition government holds only a slim majority of seats in Parliament, it could collapse. And early elections in the country may turn into a referendum on Euro membership. Now a large part of Greek debt is in the hands of its institutional creditors, and a Grexit from the Eurozone would not be as disastrous today as it was five years ago. However, the upheaval could create a wave and spread to other weak links in the Eurozone, including Italy and Spain. So soon after Brexit, an Exit will only deepen the turmoil in the European Union, and also could affect elections in other Eurozone countries.

The uncertainty has prompted members of the currency area to start to explore options. For example, the Netherlands even decided to begin the study of “relationships” with the Euro. The formal reason for the beginning of the study was the concern about the possible impact of the policy of the European Central Bank on the Dutch savers and pensioners. But in the study, the results of which will be announced later, will also try to answer the question of how whether and how the Netherlands can leave the Euro zone. Conducting such research also demonstrates how seriously the government and the parties were aware of the possibility of the collapse of the Eurozone, highlighted in Strafor.

This study was proposed by the centre party, the Christian Democrats, not the skeptics of the “freedom Party”. Starting with the study of such question before the election on 15 March, the reasonable party can send messages to their constituents that they, too, are anxious about the impact of the single currency and fiscal policy on the economy. At the same time, Dutch politicians are concerned about the future currency area and want to know what can be applied options in the event of a crisis in the Eurozone. Given the threat of a referendum on Eurozone membership in France, Italy or Greece, their fears are well-founded.

The Netherlands is an important player in Northern Europe. Surrounded by Germany, France and the UK centres of this country a large part of its foreign policy focus on maintaining the balance of power in the region. The view of the Netherlands on how to manage the Eurozone is very similar to the position of Germany on this occasion. These two countries, for example, criticized plans to bail out the southern European countries. However, the Netherlands understands the importance of the Franco-German Alliance at the heart of the European Union was the main supporter of European integration over the past six decades. For this reason, the country is unlikely to act alone. In the case that the crisis in the EU to accelerate, the Netherlands will probably try to harmonize their policies with the interests of its traditional allies — Belgium and Luxembourg — as well as with the strategy of Germany, analysts say.

Germany, however, she is faced with a difficult situation. Although most of the country’s electorate — and especially its conservative voters disapprove of the Greek financial assistance programme, the government in Berlin wants to prevent the crisis in Greece ahead of elections in September. Therefore, Athens will probably ultimately come to an agreement with its creditors, unless the plug will save the country from default in the next six months. The German government will have less influence on the situation in France and Italy — countries that pose a much more serious threat to the future of European integration. If euroscepticism minded forces will come to power in France or Italy, Berlin will enter into crisis mode and immediately try to reach an understanding with the new renegades of the government in Paris or Rome. But some of their demands — for example, proposals of the National front for the introduction of tariffs on all imports to France or the taxation of companies that hire foreign workers, including EU citizens, it will be difficult to negotiate.

A parliamentary inquiry in the Netherlands study shows that the dissolution of the Eurozone or at least the reconfiguration, all of this government begin to take into account when assessing their options for the future. The fact that centrist group has raised this question shows that now not only are eurosceptics questioning the fate of the European Union. In fact, even in 2015, the Dutch Cabinet of Ministers the issue of Schengen, in order to reduce in this area the number of member countries of Northern Europe.

As noted in Stratfor, when the Eurozone was created, its main goal was to bring France and Germany to each other, so that another war among them would be unthinkable. But an agreement put members in a stalemate. If the Eurozone collapse, then its collapse will trigger a steady alienation between members — especially between France and Germany, which would jeopardize the economic, political and military order on the continent. On the other hand, if the Eurozone continues to function and to cause discontent among voters, it would raise doubts among governments and financial markets that it is under constant threat. A constant danger, in turn, will harm the European economy and lead to the growth of more radical nationalist and populist political movements in the future.

Oil prices jumped to a record in three months