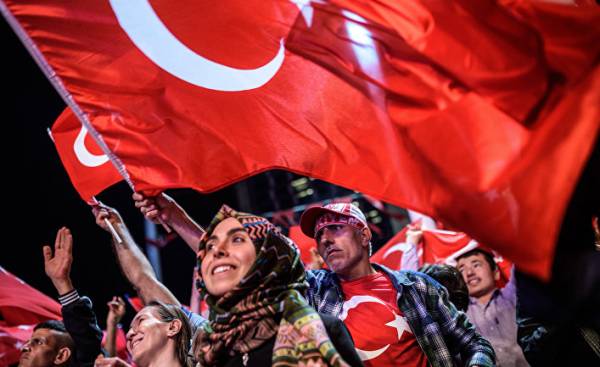 This question was addressed to us in Russia, where we went on behalf of the Club of authors of Sabah, in the historic meeting hall of the Union of journalists of Moscow. If this had happened a few years ago, this question would have given an instant response. Without hesitation would say the name of the book that everything we can imagine, and the topic would be closed. But this answer does not reflect the truth neither the one nor today. The main reason is not “quality of writing”, and “political reality of our country.”

I said at the meeting that when comparing the Turkish and Russian foreign policy for the last 15 years need to be very careful. Similar situation is typical for Iran. To compare a country, which somehow strengthened its political system and has no problems with its operation, with the country experiencing a crisis of the political system and every time to overcome this crisis thanks to the intervention of a charismatic political leader, is incorrect. And draw Parallels between their capacity to formulate foreign policy is also wrong.

Turkey over the last 15 years has experienced a tremendous transformation of the mentality. On the other hand, during this time she was really a massive fight. Terrorist organization, with extensive international support, actively worked to destabilize and divide Turkey. To the terrorism of the PKK was added to the terrorism of the terrorist organization FETÖ of Fethullah Gulen and the Islamic state (banned in Russia — approx. ed.). Despite this, the struggle continued and political power, which in the hands of state elites, a toy, back to the people. Steps toward democracy have spread to all spheres of political life of Turkey.

Those who did not accept these changes and felt that have lost their privileges at every opportunity, implemented drastic intervention. And paralyzed Turkey. From this state the country each time leader Recep Tayyip Erdogan and his political moves. However, due to the paradigm shift in Turkish domestic and foreign policy over the past 15 years also witnessed a significant growth in our national capacity. Turkey’s influence has increased, our country has become a regional player.

However, in the same period, our region is faced with very serious injuries. They began to talk about “masabni wars”, which has never happened before in Islamic history. Everywhere has spread the terrorism, fanaticism, radicalism, and we found ourselves face to face with the reality of divided countries at our borders. The American strategy of hegemony through the creation of chaos caused much destruction in our region suffering that cannot be compensated for.

While Turkey, on the one hand, they tried to protect themselves from the consequences of this destruction, she, on the other hand, searched for and eventually found ways of ensuring independence in foreign policy. As in economic policy, in foreign policy Turkey also climbed out of the trap of addiction.

She, no doubt, have paid dearly. But another way to be able to defend the long line of foreign policy, which builds upon the national interests of Turkey, was not simple. Turkey still struggled to keep a balance between idealism and realism in foreign policy, create an economic zone of integration with the surrounding countries and to continue the search for autonomy. This fight is now.

Crucial to this process is Turkey’s ability to overcome this internal crisis of the system and find a new system of government that will meet her own needs to provide the will and the power of the people. When this happens, before Turkey will open a new space for action and then develop long-term policies and, of course, successful formulation of the philosophy of this policy will be possible.