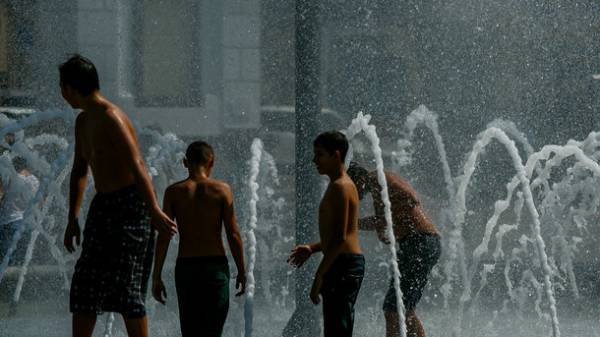 In Ukraine in the next few days will be thunderstorms in the West and North. The thermometer in the South rises to 30 degrees above zero. On Wednesday most of the country will cover storm cyclone, while the temperature in the afternoon will reach only 20 degrees. The website “Today” found out what weather to expect Ukrainians in the next few days.

On Saturday, August 26, in Ukraine is expected warming. No precipitation will be in the West of the country. Forecasters predict the rains in the Transcarpathian, Lviv, Ivano-Frankivsk, Volyn, Ternopil, Chernivtsi and Vinnytsia regions. The rest of the territory, according to forecasts Ukrgidromettsentra in the day will be partly cloudy weather. 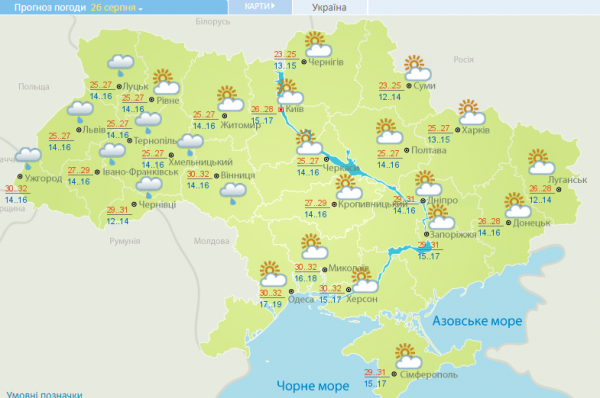 Sunday a significant change in the weather not expected. The rains will be held in the Transcarpathian, Lviv, Volyn, Rivne, Ternopil, Ivano-Frankivsk regions. The rest of the – partly cloudy.

In the South, forecasters predict relatively hot weather – 32 degrees in the afternoon. In the centre, in the capital and in the East from 26 to 28 degrees. And in the West – from 25 to 27. Cool weather is expected in the North, here, the day temperature will fluctuate in the range of 23-25 degrees. 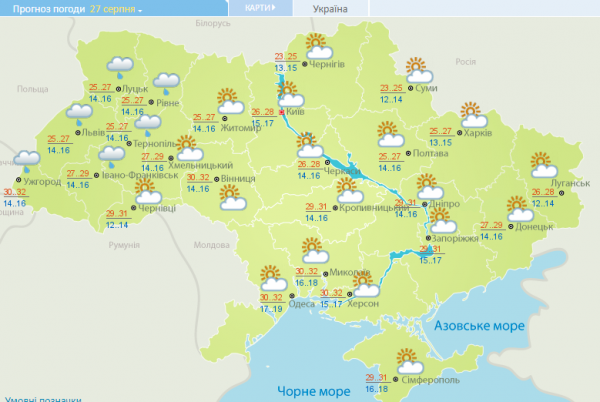 On 28 August the storm cyclone will spread to most part of the territory of Ukraine. Partly cloudy weather is expected in the South and East. The cold this day, weather forecasters are not predicted. Cooler just to be in Lviv, Volyn and Rivne regions – from 23 to 25 degrees. In other Western areas from 26 to 28 degrees. In the South the temperature will rise to 33 degrees in the East – from 28 to 31 degrees in the center – from 26 to 30 degrees. In Kyiv is expected to 28 degrees in the afternoon. In the North of the country – from 24 to 26 degrees above zero. 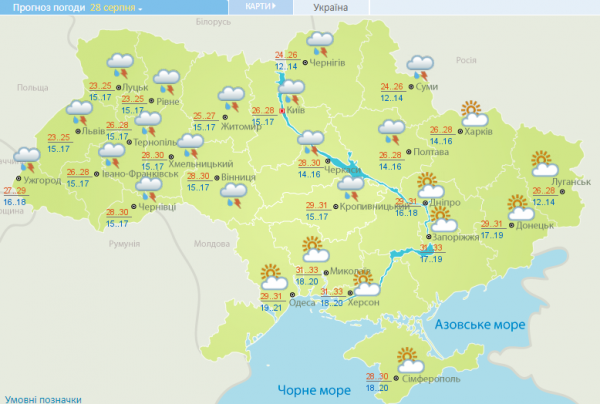 August 29, in Ukraine is expected a significant cooling. So, in the North the temperature will oscillate in the range of 17-19 degrees. In the capital from 19 to 21 degrees during the day. In the West of the country is expected from 20 to 22 degrees. In the centre the temperature will fluctuate in the range of 20-24, and in the South, from 26 to 28 degrees. Relatively warm weather in the West, where the day temperature warms up to 26-28 degrees.

Storm cyclone this day will be moved to Central, southern and Eastern areas of the country, in other areas – partly cloudy.

26 Aug revered the memory of St. Tikhon, Wonderworker of Zadonsk, informs a portal “Weatherman”. Our ancestors on this day I was cleaning out the barns and the cellars below to the winter storage has not caught on autumn rot. Watched this the day after Rowan: if flowering ash later, you can expect a long and warm autumn.

27 Aug revered the memory of the prophet Micaiah. Our ancestors noticed if the day is quiet wind, the autumn will be clear. But if Micah storm – rainy September. In earlier times this day was watching the cranes: if they are already flying to warmer climes, by the middle of October the frost will, and if not – then winter will come later.

August 28 marks the feast of the Dormition of the virgin. From 28 August the young Indian summer, which lasts until 11 September. In former times noticed, if a young Indian summer carousel on the bed – expect bad weather on the old (from 14 to 21 September). If this day the weather is calm and clear, and the autumn will be the same.

August 29 is the feast of the Saviour. Our ancestors said: “Third Spas – bread saved” because to this day was about the new crop. In the old days have noticed if the day is frost – autumn long. But if the crane will fly away to Save the third, the Intercession (October 14) will be frosty.

30 Aug revered the memory of the Holy Myron the presbyter. August 30 starts autumn leaves (the first leaf drops birch, Linden, elm, bird cherry, etc.). In the old days notice, if in the morning the mist and dew, the weather for Myron will be good. 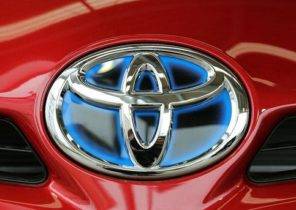