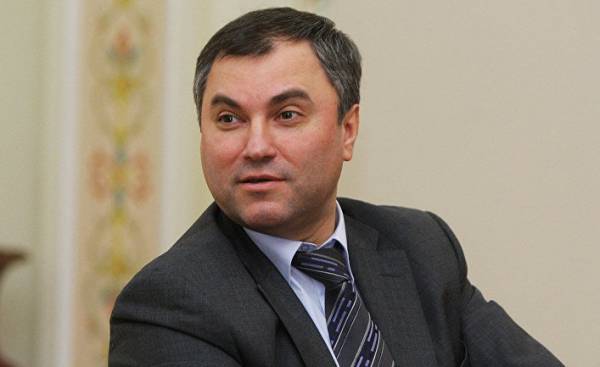 The legislature of Russia could be the next theatre of the power struggle that has rocked the Kremlin for the past three years.

Throughout the 17 years that President of Russia Vladimir Putin is in power, the Duma had no values and basically served as a means of strengthening the legitimacy of the Russian leader and the scapegoat in the adoption of tough reforms.

Putin, however, are increasingly faced with the challenges posed by the Kremlin’s political elites, heads of Russian regions and society as a whole, gives the legislature greater power to push through measures that he needed to consolidate his power. And according to a recent report of the Carnegie Moscow center, these powers might have turned the head of the newly appointed speaker of Parliament.

As soon as Putin took in 1999 as Prime Minister, his party “Unity” was released at the parliamentary elections in second place, losing the championship to the Communist party. The fight was intense, and in less than two weeks due to the high indicators of the party “Unity” Putin took over as President.

In 2004, during the next elections, the party — known by that time as the “United Russia” got the majority of seats in the Duma. This victory ensured Putin a mandate for political, economic, and social consolidation of the country and to strengthen security agencies.

To the 2007 elections, the Kremlin has done everything to achieve the highest in the history of the “United Russia” indicators and thus to legitimize Putin’s decision to swap places with Prime Minister Dmitry Medvedev next year.

But another attempt by the Kremlin to manipulate elections in 2011-2012 in conjunction with the decision to return Putin to the presidency was not well received by the Russians. Citizens took to the streets after the mass protests in post-Soviet history of Russia and, ultimately, forced the Kremlin to make concessions under public pressure, expressed their disagreement for the first time of the stay of Putin in power.

However, in the recent parliamentary elections in September 2016 Moscow again resorted to interference in the electoral process — though not so openly. The President needed was a smooth transition without major protests or riots to begin to make fundamental changes in its administration and in the legal system of Russia.

Putin still has high approval ratings, but because of the deteriorating economic environment and the apparent over-politicization of current Affairs of the country, there is a growing public discontent. Meanwhile, Putin is increasingly concerned about possible threats to his power. Therefore, the Kremlin is taking steps to prevent destabilization, suppresses dissent, and conducts personnel “cleaning” in the higher echelons of power.

But Putin needed a strong and devoted leader of the leader of the Council to carry out these changes through Parliament. For this purpose he was appointed to the post of the speaker of the state Duma Vyacheslav Volodin, a former Deputy head of his administration. Volodin is known that is able to cope with complex political situations. Moreover, Putin appointed him Deputy Prime Minister in 2012 in order to calm the storm arising from falsification of results of parliamentary elections and mass protests.

Volodin has long sought to break into the top ranks of the Kremlin elite, but he never had power. And under normal circumstances, at his post of speaker, he would not be able to approach this goal. But given Putin’s aspiration to make the laws necessary for the further consolidation of his powers, position Volodina becomes more significant.

Now Volodin is taking steps to further consolidate his power in the Duma. According to the Carnegie center, under the full control of the speaker passed the regulations and legislative activity. In addition, the authors of the report argue that it has positioned itself as a mediator between government officials and lawmakers, which gives him the ability to block the dialogue or not to consider the bills, acting in its sole discretion.

In their actions the speaker follows the schema for which Putin has become too familiar. Over the past few years the most influential figures in the Kremlin are fighting for position, often ignoring the President.

For example, at the end of 2016, the head of “Rosneft” Igor Sechin behind Putin acquired a controlling stake in a competing oil company “Bashneft”. He also ignored Putin’s order to sell shares of their company to someone from the list of approved buyers and instead sold them to the partners of their choice.

Chechen President Ramzan Kadyrov through social networks criticized the initiative of the Ministry of Finance to reduce subsidies allocated to the Republic from the Federal budget, hinting at the fact that without proper funding, the situation in the affected from the wars of Chechnya may worsen.

But Sergei Chemezov, head of state defence giant rostec, is engaged in the purchase of various defence companies, ensuring that his firm was represented in all divisions of the military-industrial complex of Russia. This Putin in the past tried to prevent (Chemezov also bought some of Russia’s largest undeveloped deposits of gold, catching them at the state Bank of VTB in January at the auction, which lasted 11 minutes, and thereby multiplying their untold riches).

These maneuvers (despite the fact that they, undoubtedly, annoy the Russian President) is hardly unexpected. After all, Sechin, Chemezov and Kadyrov are among the most influential figures in Russia, and for almost two decades, they have been for the Kremlin, stabilizing force, even if they sometimes ignore the orders of Putin.

But then from the line of the Kremlin began to deviate and the Russian political leaders of the second and third link. Heads of the Russian regions — and many of them burdened by the Federal debt, to pay which they are no longer able (or soon will be unable) — more and more often Express their disagreement.

Moreover, in order to consolidate their power, they are increasingly eliminated in their regions local authorities. To pacify them and prevent unrest, Putin dismissed over the past three weeks, six regional leaders, and on February 17 held a Security Council meeting to try to allay fears about large-scale “cleaning” in the regional government.

Although Volodin is one of the staunchest supporters of Putin, he may get out of control once will concentrate in its hands enough power, as did many other representatives of Russian political elite. For a President it can turn into a tragedy. Putin did not need another rival-heavyweight — especially now, when the threat to his power continues to grow. Putin has already started to turn his position into a more rigid and authoritarian, but he still needs supporters who will implement his strategy, not to pave their way to power. Pensions in Ukraine will increase: who can count on UAH 20 thousand per month