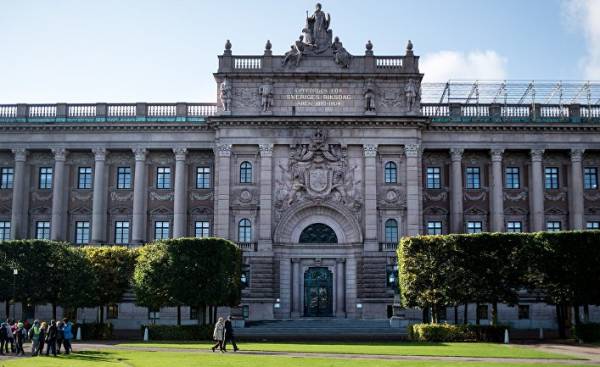 Member of Parliament from the green Party was forced to vacate the position. The official explanation was that ended a personal relationship with a colleague in the party became a bad influence on the working environment.

But according to information obtained Aftonbladet, the real reason is that he was suspected of having ties with Russia.

“He had close contacts with the Embassy. He even tried to introduce politicians from the green Party with their Russian friends,” said an informed source.

Aftonbladet managed to find out that a politician who worked in the green Party, was forced to resign because he was considered a security threat. He worked in the party for many years, when in the spring of 2015, he was dismissed from his post in Parliament. In December of the same year he ceased to perform his duties, and is currently not involved in party activities.

The official explanation was that he had to stop working due to ending an affair with a colleague in the party. As the relationship ended recently, and they worked side by side, it was concluded that it may badly affect the working environment.

But many sources, and members of Parliament, and senior members of the party, confirmed to Aftonbladet that in reality the user probably felt that a politician is a security risk.

The purpose of these contacts with the Russians was, according to the informant Aftonbladet, to force a party to change the attitude to Russia and adopt a more friendly policy toward her. However, there were also concerns that he tried to give Russia some information. These suspicions appeared to be a weighty reason to the head of the policy found it necessary to fire him.

Tried to keep people away

All of the major information sources Aftonbladet confirm that the chief of this policy believed that he represents a security risk. However, nobody wants to speak openly about the incident. Accurate information about the reasons why the policy had to stop work, known only to a very narrow circle within the party. According to Aftonbladet, about the incident was even written detailed service certificate in case the story broke.

“Only we, that is to say, a very narrow part of the members of the party, was dedicated to this cause. We tried to keep the members of Parliament and staff, and the government from this information away. For the greater good,” says one source.

Aftonbladet for several weeks, trying to get an official explanation of the reasons why the politician was forced to leave work. The security service of the Parliament did not want to comment further. From the documents of the archive of Parliament is that the man resigned from the post in August 2015, when he took a pass in Parliament and office computer. But in the archive there is no explanation of why it happened.

According to Aftonbladet, this policy was also supposed to report to the security Police, SAPO. Carl Melin (Melin Karl) from the press service of the police to give comments has refused.

“Contact to Parliament and their security. We cannot comment on individual cases relating to our operational activities,” he said.

Believe that the party did wrong

Meanwhile, in the green Party there are those who believe that it was wrong to fire the employee, and the suspicions against him were groundless.

“In my opinion, all this was for completely different reasons, but this “security threat” was a good argument to clean it up. Without a doubt. Perhaps, of course, that this was a grain of truth, I don’t know,” said one source.

“What he represented any threat — this is complete nonsense, I think. I know him for many years. They blew it out of proportion just because he met with the Russian Ambassador.”

Aftonbladet: What was the reason that he had to leave?

“I think there was another reason, that is personal relationships”.

However, what ended the relationship was the true reason for the dismissal, actively denies informed a senior member of the green Party.

“He was transferred to another place after their relationship ended, and he could continue. It has nothing to do with romantic relationship, I am absolutely sure.”