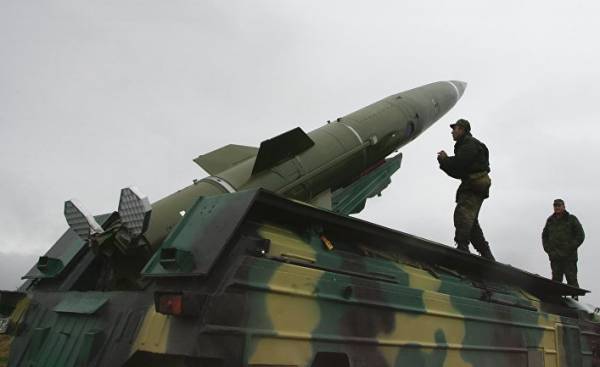 During the Soviet Union, Ukraine was a supplier of complex, sensitive technologies to the Soviet Arsenal, in addition to specific types of weapons and military equipment. To imagine the power of the Ukrainian development potential, it is sufficient to mention the “Antonov design Bureau”, developed the largest aircraft in the world.

Until 2014, when due to the invasion of Eastern Ukraine armed Pro-Russian separatists, mercenaries, and (as it turned out) the Russian military with its weapons, tanks and equipment the conflict erupted, Kiev supplied to Roshi such weapons and equipment and to this day there is nothing to replace. The Ukrainian President issued a decree prohibiting their export.

Today, according to General Paul Selva (Paul Selva) in the U.S. Congress that Russia has placed on its territory — in the Volgograd region — cruise missiles, ground-based SSC-8 that may be equipped with nuclear warheads. This was recently written by New York Times, citing “classified” information.

The Treaty on the elimination of intermediate range (the INF Treaty), signed at the time, Ronald Reagan (Ronald Reagan) and Mikhail Gorbachev, suggested that Washington and Moscow will destroy 2700 nuclear missiles with ranges up to 5,500 kilometers. Signatures of the American and Soviet leaders put an end to the so-called “euromissiles crisis”, which was reminiscent of the Cuban missile crisis during the reign of Kennedy (Kennedy). Prior to the signing of the INF Treaty, the Soviet Union deployed tactical missile systems of medium-range Pioner (SS-20), threatened Western European capitals.

Now, Russia wants to wreak havoc among the Ukrainian population, while simultaneously fueling your patriotism and scare the Baltic States, who are concerned about the expansive ambitions of the modern Russian Tsar. That was what Putin sees himself when he urges compatriots to once again feel the pride of belonging to a great nation. And this pride needs to grow the annexation of new territories.

After deployment of missiles, said General Selva, Europe feels that Russia expects the reaction of the Pentagon, but rather the Donald trump. Diplomatic representatives of six European countries, of which only two are not members of the European Union, last week appealed to several senators from Washington, to do everything they could to convince the President of trump not to lift sanctions against Russia and help them with military equipment to counter Russian expansion.

Pavlo Klimkin, Ukrainian Minister of foreign Affairs and the ambassadors of Lithuania, Latvia, Estonia, Poland and Georgia in Washington asked the us Congress to extend sanctions against Russia until it withdraws its forces from the territory of Ukraine.

These events and the subsequent international pressure, apparently, are the reason that Putin initiated the publication in the Russian press free interpretation of the report of the Stockholm Institute for peace studies (SIEPM). The document contains information about the main directions of export of Ukrainian weapons production over the past five years, but no lights year-to-year dynamics and therefore does not reflect the full termination of deliveries of products of the defense industry of Ukraine to Russia since the second half of 2014.

Swedish experts who participated in the global study on the export of arms, claim that Russia has increased the supply of arms by 4.7% per year in 2007-2011 and 2012-2016. Thus, from 2012 to 2016, Russia sent arms to 50 countries, including the terrorists of Donbass. This, of course, not mentioned in the official publications of the Russian media.

There is no doubt that Russia is seeking to mislead the world community, speaking about alleged military-technical cooperation between Ukraine and Russia. In this regard, it is particularly important and timely to draw attention to the fact the complete cessation of interaction between Kiev and Moscow in this sphere in 2014. Suffice it to recall, in particular, the decree of the President of Ukraine 691/2014 from 27-08-2014 about the decisions of the Council of national security and defense of August 27, 2014 “On measures to improve state military-technical policy.” In accordance with paragraph 7 of paragraph 1 of this document, the export to Russia of military goods and dual-use stops.

It is obvious that partial use of the report, SHIPM demonstrates the attempts of the Russian leadership to distract the international community from the facts of the sale, in violation of international law, production of military-industrial complex of Russia to terrorist organizations DNR and LNR (as noted above), and criminal dictatorships and governments, as in Venezuela, which directs the resulting weapon drug traffickers or radical Islamist movements.

According to a report by Swedish experts, Pro-Russian militias in the East of Ukraine received from the Russian tanks and armored vehicles, as well as portable anti-aircraft missile systems similar to those, of whom 17 July 2014 in the sky over Ukraine was shot down a passenger plane Malaysia Airlines. International investigation proved that the missile system “earth-air” was brought from Russia at the request of the separatists in the same night, when the plane was shot down.

SHIPM, indicates the important role of Ukraine on the world arms market, where the state ranks ninth in terms of volume. At the same time for some countries Ukraine is one of the main suppliers.

In recent years Ukraine has achieved significant reorientation of its defense industry, while simultaneously modernizing equipment Nazionali guard and the army.

According to the publications of Russian media, Ukraine supplies Russia with an impressive number of weapons. There is no doubt that we face a large-scale maneuver of psychological warfare with the aim to demoralize Ukrainian soldiers and civilians and cause distrust from the international community. Even the media say that Russia, in 2014 began to start on its territory import-substituting enterprises, which by 2015 is probably already supplied the Russian army with weapons and equipment, previously imported from abroad. While Russia faces many difficulties in implementing this.

An explosive mixture: the spirit of the Soviet Union, combined with the tsarist narcissism brings to life a new cold war.

Whosoever will give himself the trouble to examine the publications of the media controlled by the Kremlin, will come to the same conclusion. Distort the report of such international organizations as SIIN wishing to present Ukraine as a country that sells weapons to our own invaders, is almost naive, but the tactics of Goebbels — “lie, lie, something will remain!” — penetrated deeply into the Russian methods of information warfare.

It seems that time is against Russia, and its actions are aimed at showcasing its military capabilities seriously concerned about Europe and the United States. What did you think about China?