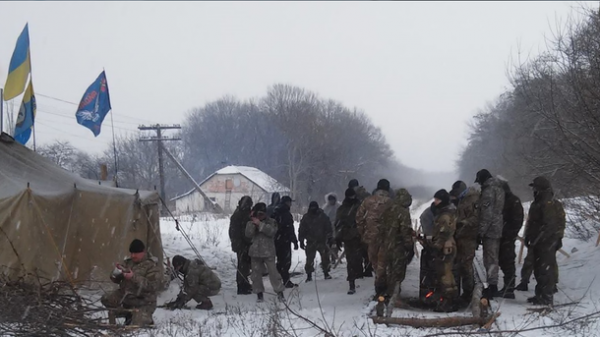 Today the economy of Ukraine are extremely heavy, and due to the blockade of Donbass can be stopped by the Ukrainian enterprises of the heat organization. This was stated by Prime Minister Vladimir Groisman.

“Such reckless politicized actions will suffer ordinary Ukrainians. Russia is waging war against Ukraine – and she is coming on two fronts. The first front – military aggression in the East of our country. But the Russians know that they can not win the Ukrainian army and the Ukrainian people. So they have several fronts” – said the Prime Minister.

Groysman reminded that it all began with military and economic aggression “For Ukrainian goods covered all Russian markets. Even for those goods which fall to a third country, Russia has closed transit. Such a combination of aggression then got the definition of hybrid. Today the task of the Russian Federation to destroy Ukraine as a country. Economically and socially undermine the ability of our development”.

He stressed that restricting the supply of thermal coal and the necessary components for the steel industry will hit ordinary Ukrainians. And in some cities of the country can be stopped heating.

“I am surprised by the stance of some political representatives who are not explaining the real state of Affairs, what will be the impact of the embargo, are now trying somehow to play along with the Russians. They now use frozen conflict scenario to repeat in the Donbas scenario in Transnistria. And who will suffer? Ukraine and Ukrainians. Our task – to return the Donbass in Ukraine. Today, there are companies produce in the Ukrainian subsurface coal, which is extremely necessary for Ukraine, it should not be the subject of blackmail and pressure on Ukraine. The situation is indeed extremely difficult. But in any situation we must come out strong”, – said Groisman.

He stressed that only according to some “politicians” supposedly very easy to operate and easy to ensure energy independence of Ukraine – in just one month. But really, we need an appropriate period of time, resources and technological and technical solutions for Ukraine to become truly energy independent.

“Our goal is to minimize any negative impact on the life of a Ukrainian citizen. And we’ll deal with it. I’m interested in are not the ones who block the road, and those who organise road closures. Consider such actions they consciously or unconsciously undermine our independence,” – said the Prime Minister.