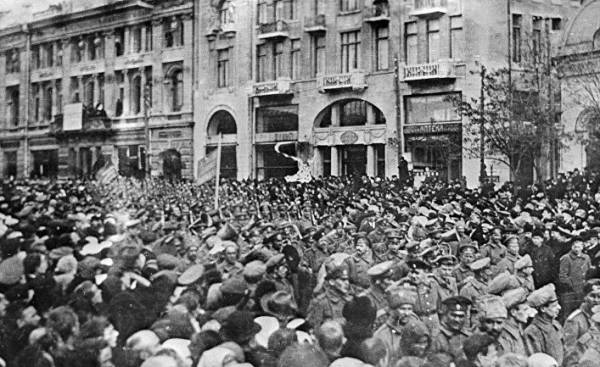 1917 was a turning point in the history of Russia. The country lived under the monarchical regime of Tsar Nicholas II, suddenly turned into a socialist Republic, created by Vladimir Lenin and his followers, including Joseph Stalin.

In foreign policy Russia was involved in the First world war. Meanwhile, the situation inside the country was characterized by fundamental changes: from mode to name. The former Russian Empire gave way to the USSR, Union of Soviet Socialist Republics, or Soviet Union.

The Communist revolution of 1917 took place in two phases: the first phase in February of the same year (or in March, depending on calendar according to the Julian or Gregorian calendar, respectively), and the second in October (or November).

In the first stage, the beginning of the year, the main task was to replace the autocratic government of Nicholas II in a more liberal regime headed by Prince Georgi Lvov and the Minister of defense Alexander Kerensky. This goal was achieved, however, Kerensky remained in power for long, soon (in the second stage of the revolution) he was suspended Lenin and his Bolshevik associates.

According to Professor of international relations from the University of Vale Sinos shower and the military College of Porto Alegre, Diogo Pautasso, the events of 1917 revealed numerous contradictions, by that time ripened in Russia. A specialist in the history of Russia, Diogo, Pautasso explains Sputnik Brasil, than turned to Russia, the first stage of the Communist revolution:

“This event reflected the accumulated contradictions. From a structural point of view, the rapid development of capitalism in the cities sought to put an end to archaic systems: agrarian (feudal) and political (tsarism). As for the current by the time of the situation, the First world war exacerbated the conflict due to military failures, supply disruptions and political differences. We are talking about a transitional period in which the old is dead and gone and the new was not yet prepared to declare myself.”

Diogo, Pautasso believes that what happened in Russia between the beginning and the end of 1917 can be called a transitional period, which ended with the triumph of the movement led by Lenin:

“This period represents the transition postmenarcheal pores. It was marked by the confrontation between the Provisional government of the State Duma and the Petrograd Soviet, trying to forge a different (mainstream) political order against a background of economic and institutional disruption. Dual power in the country was accompanied by a political crisis and institutional paralysis. While the Duma, under the leadership of Kerensky reforms and repression increases, Tips torn apart by internecine political bickering, but they all begin to sound louder than the voice of the Bolsheviks. Chaos and radicalization of doing the Provisional government untenable”.

But what in fact turned out for Russia the fall of the Empire and its subsequent replacement by a liberal left-wing Republic? Historian Diogo, Pautasso gives the answer:

“Thanks to the land reform was overcome feudal structures, the country emerged from world war I, was the nationalization of factories, the small Nations of the former Empire began to actively use their right to self — determination- these are just some of immediately of measures taken. But the main issue is the set of actions, which directs the first socialist experience of mankind and turned the USSR into a superpower — despite the contradictions that led to its collapse between 1989 and 1991”.

Professor Diogo, Pautasso adds that “the Soviet experience resonated throughout the world. He played a decisive role in the formation of Communist parties in different countries, influenced the revolutionary struggle, was one of the causes of the cold war and formed the concept of civilian-based set of rights (to education, health, housing, labor, among others), the guarantor of which is the state.”

And in Brazil? “The formation of the Communist party, strikes, the fight for rights — a source of inspiration for them were the achievements of the Soviet Union, concludes Diogo, Pautasso. — As for other movements, including a military regime, they appeared as the opposition to this experience. In General, as stressed by Domenico Losurdo [Domenico Losurdo, Italian philosopher of Marxism] Communist movement, closely linked to the Soviet experience, has played a Central role in the fight against the three main types of discrimination the twentieth century: race, sex and class, and contributed to the construction of the welfare state”.