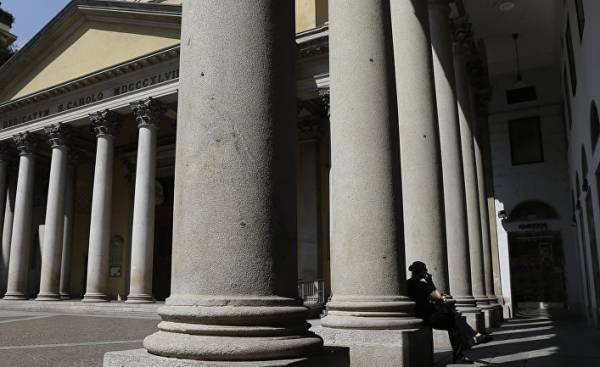 A clever friend in Milan recently asked me the following question: “If a foreign investor, such as US, want to invest a considerable amount in the Italian economy, what would you have advised him?” I replied that, although there are many opportunities for investments in various companies and industries, and investment climate in General is very confusing. I would recommend investing with knowledgeable local partner who can navigate the system and to distinguish between implicit risks.

Of course, the same advice can be given about many other countries, such as China, India and Brazil. However, the Eurozone is increasingly becoming the economic bloc of countries moving at two different speeds, and potential political consequences of this trend raise investors increased anxiety.

At a recent meeting of the investment advisers of high level, one of the organizers asked the audience whether the Euro, in their opinion, exist in five years. Only one person out of two hundred and said that it will not. This is quite unexpected collective assessment of the risks involved, especially given the current economic situation in Europe.

Real (inflation-adjusted) GDP is now approximately at the level of 2001. In Spain things are better, but its real GDP is still about the same as in 2008, just before the financial crisis. In southern Europe, including France, are very weak pace of economic recovery and stubbornly high unemployment above 10% (and among young people under 30 years of age it is much higher).

Meanwhile, the level of debt has reached or exceeded 100% of GDP (in Italy it is now equal to 135%), while inflation and the real growth rate (and thus nominal) remain low. This protracted debt overhang prevents use of fiscal measures to promote the return of strong growth.

The competitiveness of the Eurozone countries in the tradable sectors varies greatly due to the divergence, which began as soon as the single currency. Although the recent weakening of the Euro will partially dull the impact of this divergence, it will not eliminate it completely. Germany will remain a big surplus, and in countries where the ratio of labor cost to productivity is high, foreign trade will continue to generate insufficient pace of economic growth.

After the financial crisis of 2008 everybody thought that a long, difficult economic recovery in the Eurozone will eventually be replaced by strong growth. But now such reasoning is not credible. Europe seems to be slowly recovering, and was trapped semi-permanent equilibrium of low growth.

Social policy of the Eurozone countries dulled the effect of the polarization of jobs and incomes, which is caused by globalization, automation and the digital technologies on the distribution of income in society. However, these countries (although, to be fair, many others) still don’t realize until the end of the three incident to each other changes that affect the world economy, starting around 2000.

The first (and closest to Europe): the Euro was introduced without simultaneous harmonization in the area of fiscal policy and regulation. Second, China joined the world trade organization and became tightly integrated into world markets. Third, digital technology began to exert an increasing influence on the economic structure, jobs and global supply chains, changing global employment patterns and accelerated the process of the disappearance of jobs associated with routine work.

Shortly thereafter, between 2003 and 2006, Germany has carried out significant reforms to improve structural flexibility and competitiveness. And in 2005 had expired the International agreement on textile products. Without this agreement, based on which since 1974 has established export quotas of textiles and garments, global textile industry has been actively concentrated in China and, surprisingly, in Bangladesh. One only 2005 China doubled its exports of textiles and clothing in the Western countries. This phenomenon had a particularly negative impact on poor regions of Europe, as well as less competitive developing countries around the world.

All these changes have led to imbalances in growth models of the economy in a number of countries. As many countries pursued a policy of struggle against deficiency of aggregate demand, they have increased the national debt and the housing market appeared the debt bubble. Data growth model was unsustainable, and when they eventually collapsed, the underlying structural weaknesses of the economy suddenly naked.

There is now a growing resistance to the existing system. The results of the referendum on Breccia in the UK and elected Donald trump President of the United States reflected the dissatisfaction of society with a system of income distribution the current economic model. And the increase in support for populist, nationalist and anti-European parties now creates a serious threat to Europe, and not least for the major Eurozone countries — France and Italy.

Regardless of win or not these parties at the polls in the near future, their occurrence casts doubt on overly optimistic views on the prospects for a long life of the Euro. Anti-European political forces clearly achieve electoral success. Their popularity will continue to grow if the economic growth will remain anemic, and unemployment is high. Meanwhile, the European Union, most likely, will not in the near future to deal with significant issues or institutional reforms for fear that such steps will negatively affect the results of the upcoming elections later this year in the Netherlands, France, Germany and possibly Italy.

Yes, of course, there is an alternative view, according to which Brakcet, the election trump and the rise of populist and nationalist parties will be an awakening call and push Europe towards a broader integration policy and stimulate economic growth. But this requires that EU policies abandoned the opinion that each country alone is responsible for restoring order in your home, while respecting all obligations to the EU — budget, financial and regulatory.

Adherence to the rules of the EU no longer seems appropriate because the current system creates too many restrictions and contains too little of effective mechanisms of adaptation. Yes, of course, budget, structural, and political reforms very much needed; but it will not be sufficient to solve the problem with economic growth in Europe. The irony of all this is that Eurozone countries have enormous growth potential in many industries. They are not hopeless, they just need to weaken the limitations of the system.

Will the future Europe look like a slow motion train derailed, or a new generation of young leaders will achieve greater integration and inclusive economic growth? It’s hard to say. I personally would not shy away neither from the first nor from the second probability.

One thing seems clear: the status quo is unstable and cannot be sustained indefinitely. Without significant changes in policy and the trajectory of the economy at some point can happen the political circuit, as has already happened in the US and the UK.