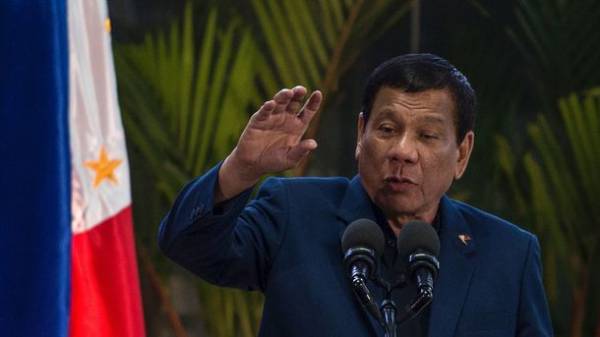 The President of the Philippines Rodrigo duterte reminded the daughter of former U.S. President Chelsea Clinton that her father was having an affair with Intern Monica Lewinsky, according to Reuters. Thus the head of state said the criticism of Clinton in his address.

Dissatisfaction with the daughters of the American ex-President has caused the words Duterte on violence against women. Philippine leader made a dramatic statement, declaring martial law in the country.

“For this military situation and any consequences reply be me and only me. You do your job. The rest is for me. If necessary, I will sit behind you in jail. If you raped three women, I’ll tell you what I did,” said Duterte in his address to the soldiers, as quoted by the Daily Mail.

Chelsea Clinton wrote on this on Twitter: “that’s Not funny. Exactly. Duterte — a thug and a murderer who does not pay attention to human rights. It is important to continue to say that rape is no joke”.

In response to Duterte recalled several cases of sexual violence against Japanese women in Okinawa where American troops are based. “This is a crime really committed by soldiers, mostly Americans, in Okinawa. And the Philippine military this has never been heard,” said the President. He also explained that he was referring to when talking about rape.

“I warned soldiers that any action will have to answer to me. I took responsibility for their foolishness. I said sarcastically,” — said Duterte.

Philippine leader condemned those who fell upon him with criticism. “These women, they only hear about the rape. As, for example, this Chelsea, she threw herself at me… I tell her so: and when your father, the President of the United States, had sex with Lewinsky and other women in the White house, how did you feel? In him you also attacked?” asked Duterte.

Duterte at the time was famous for a number of very harsh statements addressed to world leaders, including former us President Barack Obama and his mother. He, in particular, demanded that the United States not to consider his country “like a dog on a leash.” In addition, the head of the Philippines sent Obama and the European Union “to hell” and called “fool” by ex-UN Secretary General ban Ki-moon.

In 1998, the 42nd U.S. President bill Clinton was subjected to impeachment proceedings after emergence in mass media of information on the relationship of the President with a young White house employee Monica Lewinsky. Clinton was accused of making false statements to the court and obstructing justice. Later he was acquitted of all charges.