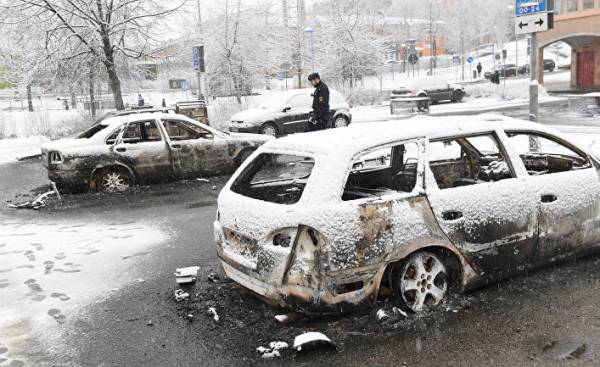 Last Saturday Aftenposten published an article on eight pages about the problems in Sweden.

The police did not dare to appear in some areas of Stockholm, Gothenburg and malmö, the country has dramatically increased the number of murders committed using firearms and explosives.

The Aftenposten report claimed that the number of such murders has increased from 13 in 2012 to about 30 in the past, and in the year before.

Sweden no longer keeps statistics on the relationship between immigration and crime — allegedly because criminologists since 1974 know that in criminal circles, immigrants represented more than abundantly.

Several reports were issued, indicating that the Swedish state has lost control of some urban areas, and it is quite alarming. The crucial role of the state to exercise control within any geographical area and to ensure the safety of residents.

When Donald trump first spoke about Sweden, the impression was that he decided that in the country before the attack occurred.

Gradually it became clear that trump was referring to a television program that talked about the problems in Sweden with immigrants.

You may think about Donald trump all they want, but he’s absolutely right that Sweden has a big problem with many inhabitants of foreign origin. And it’s amazing that the former Prime Minister Carl Bildt feels the need to call Donald trump “the least informed person in the world.”

In malmö, for example, is home to representatives of 174 Nations, and unemployment in the city is almost twice more than in Sweden in General.

It’s good when the media put Trump on the view when he’s wrong, but in Sweden the reaction seems almost hysterical. Obviously, Sweden has a big problem with immigration. Recognition of this is now receiving support, even from the Swedish political elite. After the monstrous waves of immigration in 2015, hit the brakes, but it does not prevent the country to have a big problem.

The first words of Donald trump took as if he was talking about the terrorist attack that occurred in Stockholm the day before, but then came the clarification that he was referring to the rise in crime in Sweden.

Former Prime Minister Carl Bildt, asked what it stoned Donald trump, on social media there are a lot of reports that in Sweden the day before nothing happened.

Fierce reaction to a statement by Donald trump suggests that he is — no matter what is pressed on the sore spot. The danger is that reaction to be repulsed, and that the public will think that Donald trump is right and the media wrong.

It is possible that the President of the United States in his first comments about Sweden was not careful enough.

But by and large he’s absolutely right.

Stavrum Gunnar (Gunnar Stavrum) — chief editor of the newspaper Nettavisen. Previously worked in the Department of NRK in the southern Norwegian Newspapers Fædrelandsvennen, Bergens Tidende, Kapital, Dagens Næringsliv and телеканалеTV 2. The author of several books. Considers himself a liberal, an environmentalist and independent of any political party, although in the last two elections voted for the party Venstre (“Left”).