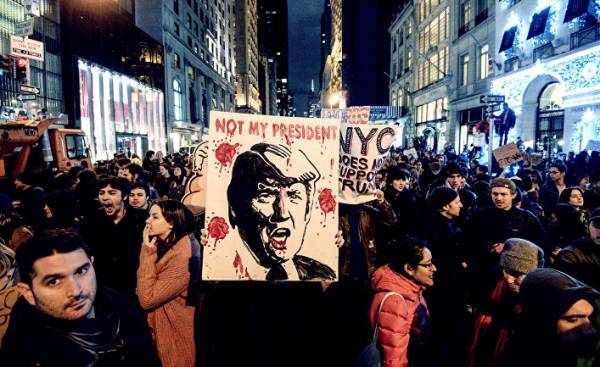 For young Russians like to support me or to criticize Vladimir Putin — the question of moral choice. To support him means to oppose Western democracy and freedom of speech; criticizing him means to fight against corruption and pointless wars. I belong to the second camp — I wanted to be a journalist, to be able to uncover the truth. But my parents dissuaded to write about politics was too dangerous. So when I turned 18, I left Moscow to start over in new York.

No matter how you try, when you emigrate, you cannot leave all your Luggage behind; it is impossible to completely disconnect from the old world. Five years later I’m starting to see the resemblance between that country from which I left and the country that I now call home.

Putin and trump called populists. Their country is now in a strange way are in agreement. Trump has defended Putin against charges that he is a killer. One of the Russian enterprises even came to the point that minted a silver coin with the inscription on one side: “We believe trump” (In Trump We Trust).

It’s only been a month since Donald trump became President, and new York University there is still panic. Classmate admitted that after the election was crying in the teaching. Like me, she blamed herself for inaction that allowed Trump to win. University halls were empty — at the lecture, almost no one came. My Manager in the e-newsletter advised students to be careful. I was up all night sitting in my little apartment in Manhattan, eating on the house Indian food and cried a lot.

The window of my house facing the trump tower. This building represents the President, which I’m still afraid to say something bad. I thought my past Moscow will give me strength and I’ll be able to live in new York. But here again I’m afraid. Immediately after the election, vandals daubed the walls of the University Muslim prayer room reading “trump!”. This vile act was the harbinger of all that happened then.

Before the election I always thought that the Americans hide their political views, holding them in secret — like their medical cards. On campus I have only seen one cap with the inscription “let’s Make America great again”, and that it was an expression of irony. But now everything has changed and reminds me of the country where I was born.

In Russia Putin’s supporters have expressed their opinion loud and clear. They have nothing to fear — after all, they are a significant majority. I know them. Some of them even were my friends. Most of them voted for him for reasons of expediency, but when against Russia were imposed by Western sanctions, they had imbued him with a sense of fervent devotion.

New York, unlike trump, loves all immigrants — Russians, Iranians, and Mexicans. There is no need to mingle with the crowd, not to stand out; after all come from somewhere. And yet, wherever I went, I always learn Russian — gives me my strong accent. Ask me about vodka, communism and Russian brides, marriage agencies offer. And now I am constantly asked about Russian hackers and about Putin. I can say that the liberal Americans finally feel like the same as me — they also have a President who is not a symbol of their values.

Though NYU still seems like a safe place in which a lot of good people and hold constructive conversations, I’m worried about the future. Third in February near the University during the protests caused by the speech of MacInnes Gavin (Gavin McInnes), a conservative commentator, known for his racist and sexist men’s organization Proud Boys, was arrested 11 people.

RT enthusiastically rushed to tell about it. The journalists stressed that the protests were violent, with violence, and that MacInnes allegedly threw a gas canister, and he then wrote on Twitter that “due to the fact that he was called a Nazi, he was much more painful”. They quoted his words: “In fact, after this you become stupider. Amazing, isn’t it? You spend — or rather, your parents spending 30 Grand a semester to make you stupider”.

No, we are not professional anarchists, and students of one of the best universities in the country. We are a progressive school, and we are not fools.

I hope that the young, progressive American students will not stop. Although we are unable to change the situation in Moscow, I feel that the people of new York — and hopefully all Americans — known for its independent nature, the ability to pull yourself together, cohesion will not give up.