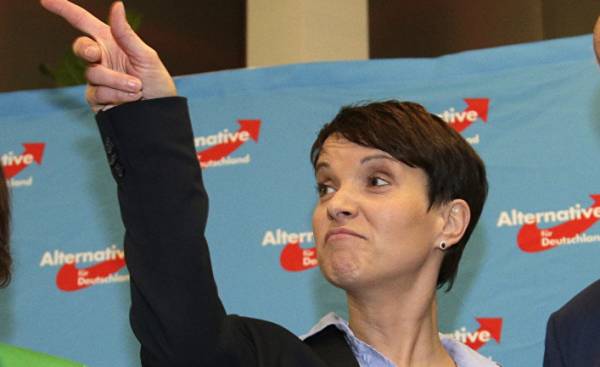 Relations between the Kremlin and the party “Alternative for Germany”, are critical towards immigrants have become increasingly warm.

On Monday, the ADH leader Frauke Petry went to Moscow, where she, in her own words, was invited by the city Council, to discuss plans for future cooperation between regional parliaments of Germany and Russia, as well as expansion of cooperation among political youth organizations of the two countries.

In Moscow the leader of the party, first of all, visited Vyacheslav Volodin, being speaker of the lower house of the Russian Parliament. Volodin included in the Kremlin elite, he is closely associated with Putin. Due to assigned to it the role “responsible for the political integration of the Ukrainian region of Crimea into the Russian Federation”, Volodin 2014 denied entry into the EU.

Earlier former Deputy Prime Minister, Volodin also had a hand and to try to involve young people in a youth organization of Putin’s party “United Russia”. Volodin, in addition, was responsible for the decision to toughen the punishment for participation in unauthorized demonstrations, when opponents of Putin in 2011, he organized in Moscow large-scale protests against the manipulation of the elections.

During a meeting with Russian parliamentarians Frauke Petri, in particular, spoke to the ultra-nationalist politician Vladimir Zhirinovsky, whose party officially the opposition, but to which Putin really is quite tolerable. The meeting was also attended by Paul Zavalny, President of Russian Committee on energy and coordinator of Russian contacts with the Reichstag in Germany.

Petri’s visit to Moscow means that the “Alternative for Germany” makes all the big bet on the expansion of contacts with his supporters in the Kremlin. Earlier, the party did not advertise the relations with Russia.

In April 2016 MEP Markus Prötzel, which today is the civilian husband of Frauke Petri, took part in the Yalta conference of the international economic forum in Crimea. Pretzel was accompanied by the Chairman of the organization молодежноq ADH “Young alternative”, Marcus Frohnmayer (Markus Frohnmaier). In January of this year, Spiegel reported that the trip Pretzel was funded by the Russian Foundation close to the government.

Marcus Frohnmayer last year denied that his organization works with the Young guard of Putin’s party “United Russia”. But one of the talks in Moscow was the possibility of more intensive cooperation between the youth organizations.

In 2015, the Deputy Chairman of the ADH Alexander Gauland (Alexander Gauland) and a member of the party leadership Pazderski Georg (Georg Pazderski) visited the Russian Embassy in Berlin to discuss questions of foreign policy.

In the same year, Garland traveled to St. Petersburg, the trip was paid for by Russian oligarch Konstantin Malofeev. In St. Petersburg, Howland met, in particular, with the then Chairman of the Duma Committee on international Affairs Andrei Klimovym.

Unlike marine Le Pen, which does not hide the fact that the front national borrowed money in Russian banks, “Alternative for Germany” denies the allegations that the party accept financial support from Russia.

However, the “Alternative for Germany”, was founded in 2013 as a protest against the policy of the German government in relation to the Euro, draws attention to cooperation partners in Europe. At the Congress in Koblenz in January, Petri played with marine Le Pen, Geert Wilders and the Austrian freedom party.