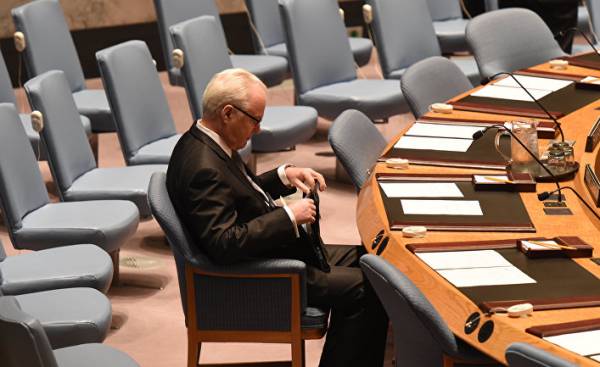 Died permanent representative of the Russian Federation to the UN Vitaly Churkin. As reported in the Russian Ministry of foreign Affairs, he died in new York the day before your 65th birthday.

“The outstanding Russian diplomat died in working post. We Express to the families and friends of Vitaly Ivanovich Churkin deepest condolences,” — said in a statement on the Russian MFA website.

As told to Reuters, the Deputy permanent representative Vladimir Safronkov, Churkin suddenly became ill when he was in his office at the Russian mission to the UN. The diplomat was taken to the hospital, where he died. The exact cause of death is not yet known.

“Shocked by the death of Vitaly Churkin. Virtuoso diplomacy and compassionate man who did everything in his power to smooth differences in U.S.-Russian relations”, — so responded on Twitter Samantha Power, who was the U.S. permanent representative to the UN during the second presidential term of Barack Obama.

“The job of Ambassador to the UN is very heavy, I know what it is, I believe diplomatic posts this is the most difficult. Due to the fact that you do not have to deal with bilateral relations and all the problems that the world faces,” — said in an interview with Bi-bi-si Sergei Ordzhonikidze, United Nations Deputy Secretary General and Director General of the UN office in Geneva, 2002-2011. He noted that Vitaly Churkin, “on a personal level was a talented man, with a sense of humor.” “He ably defended the interests of Russia in the UN and enjoyed a well-deserved respect of his colleagues,” — said Ordzhonikidze.

Vitaly Churkin was born in 1952. In 1974 he graduated from Moscow state University, and then went to work in the Ministry of foreign Affairs of the USSR. The first few years he worked in the translation Department, and in 1980-ies it was transferred first to second and then first Secretary to the Embassy in the United States.

“Absolutely devastated by the news of the death of my friend and colleague Vitaly Churkin. The giant’s diplomacy with a wonderful temperament. Rest in peace,” wrote the British permanent representative to the UN Matthew Rycroft.

“His presence was so familiar that I’m really in shock. We empathize with his family, relatives and the Russian authorities,” — said the Deputy press Secretary of the UN Secretary-General Farhan Haq.