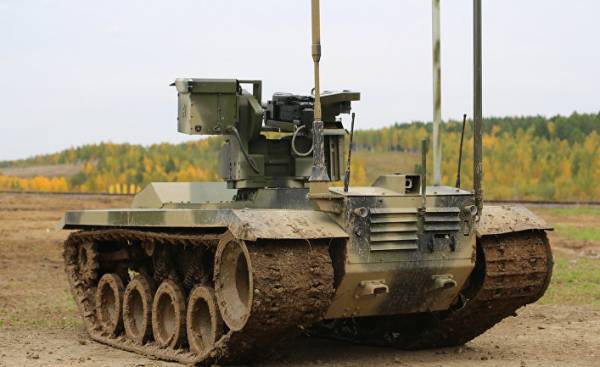 Russians do not want to lag behind the Americans in the use of unmanned aerial vehicles and military vehicles with remote control. That is why the Degtyarev Plant is currently working to develop a set of “Nerekhta”, which can be used as the unit of artillery weapons, to perform reconnaissance missions and even as a “tank-kamikaze”. This last function, because of its destructive power, represents for the Russian army the greatest interest.

At the moment, “Nerekhta” is factory tested to verify the reliability of the radio system. Since the tank does not require a driver and gunner, it has a relatively small size — about one meter in length and a weight of only 300 kilos and is driven by an electric motor. The machine can carry up to 11 pounds of explosives (as in the original, in fact it moves at a speed of 11 km/h and can carry several hundred kilograms of explosives, approx. transl.), acting as a “robot bombers”, which is able to get close to any armored vehicle or fortification and in a particular place to carry out a suicide bombing. In this case, “Nerekhta” protected from fire armor infantry.

Although the body-the tank can be controlled via radio, Russian combat robot is also adapted for use by the navigation system, allowing him to receive instructions about the location of targets and to use the card for the appropriate deployment without the need for additional guidance. Only when the robot reaches its target, the operator remotely activates the explosives. Alternatively, the tank can be equipped with machine guns 7.62 mm and 12.7 mm, and accomplish tasks on the positions of the motorized rifle troops.

The Degtyarev plant is one of the leading Russian enterprises of the defense industry, although also engaged in the production for the civil sector. Founded in 1917, during the Soviet period the factory was one of the main suppliers of the state, carrying out orders for the manufacture of rifles and machine guns Degtyareva. The latter also was exported to many countries. The products of civilian areas of the plant included motorcycles “Voskhod”, which in some Western countries are sold under the brand name Cossack.